There are many ways to awaken.

One is by reading Of Bonobos and Men by Deni Ellis Béchard. 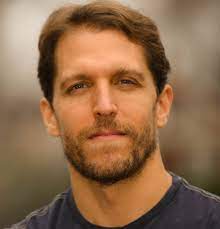 Readers may recognize the name of the author, whose article on the pandemic, “Of Viruses & Vectors,” pulled me out of writer’s block and inspired me to read his book on the bonobo, which has had an even more powerful effect.

Prior to heading to the Democratic Republic of the Congo in 2012 to learn about the bonobo (bənō’bō), Deni Ellis Béchard had for years been doing research on the “state of the planet” as he puts it, including climate change, the extinction of species, and environmental degradation. The Congo was of special interest in part because of its rainforests and the role they play in climate change. He also wanted to know which approaches to conservation flooding the country were being the most effective.

What I learned from the book resulting from his studies has been so powerful that my personal perspective of the earth has shifted on its axis. For example, I did not know that we are one of the hominids known as the great apes: gorillas, chimpanzees, orangutans, bonobos, and humans.

What? We’re a great ape? How come no one told me?

Clearly, we have incredibly evolved beyond our fellow primates. However, as we stand on the threshold of the sixth extinction due to the way we have disrupted life on earth, it seems to be time to rethink our way of being. And Of Bonobos and Men certain inspires that effort.

Before he set off for the Congo, Béchard had encountered his first bonobo at the Great Ape Trust on the outskirts of Des Moines, Iowa. He met there with renowned primatologist Dr. Sue Savage-Rumbaugh. After working with the bonobo for three decades, and especially with a very intelligent bonobo named Kanzi, she had become aware of their enormous potential–and ours as well.

Kanzi was learning very fast, and as a result, Savage-Rumbaugh concluded that “humanity isn’t stuck in the current rut. . . .We might consider ourselves a naked ape, but we have the capacity to be, let’s say, a godlike ape.”

Great.  Onward with a new vision of the leap required, if we are to survive.

TOUCHING DOWN IN THE CONGO

Béchard began his research journey in the Congo after landing in Kenshasa on the western border of the country. There he met with Sally Jewell Coxe, who had launched The Bonobo Conservation Initiative (BCI) in 1998. It was in the course of writing for National Geographic that she developed a passion for the cause she would pursue through BCI. Béchard was particularly interested in her approach because it was unusual in the way it engaged local people in the conservation effort. Other conservation outsiders often seemed intent on giving orders whereas she was, through unusual social skills, cultivating relationships and support. 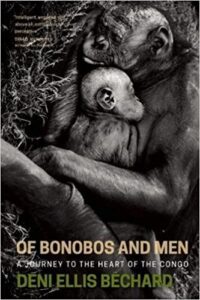 The more he learned about the bonobo, the more open Béchard became to Sally’s perception that it is “important for our understanding of ourselves as humans, not only in terms of where we come from and how we have evolved, but also in terms of what we can be.” After all, the bonobo, along with the chimpanzee, shares 98.8% of our DNA. We have a common ancestor, but at some point millions of years ago, we set off on a different path.

In Iowa, Béchard had seen evidence in the bonobo’s gaze of a “deeply social being” and a peaceful one, all members of a group involved in taking care of their young. And they are highly sexual, engaging in countless different ways just for the pleasure of it. As Béchard wrote, “Sex is their hug, their handshake, their massage and their noon martini.” On hearing that their society is matriarchal, I wondered if Sally Jewell Coxe and Sue Savage-Rumbaugh were thinking about going more that way in order to improve our own chances of survival.

However, it is the bonobo that is seriously at risk right now in an era when humans are, as Béchard says, “the driving force in a new mass extinction.” This threat began when Europeans discovered in the Congo the tremendous resources they could exploit. In fact just the minerals that could be mined have an estimated value of over $24 trillion. Mining is now the Congo’s biggest industry; and copper cobalt, gold, diamonds and coltan (used in the manufacturing of computers) are some of its most important products.

However, the first target of exploitation was the ivory and rubber discovered in the nineteenth century by King Leopold II of Belgium. He proceeded to make himself the owner and absolute ruler of the Congo from 1865 to 1909. He not only pillaged its resources but also enslaved and brutalized the people, his reign resulting in an estimated 10 million deaths.

The Congolese emerged from this experience forever distrustful of outsiders who continued to pursue its riches while seeding ongoing conflicts “with a steady flow of weapons,” as Béchard put it. But the Congo’s own ensuing leaders, infected by the lust for wealth and power, proceeded to create a history distinguished by war and the descent into disorder and poverty.

When Béchard arrived in Kinshasa at the beginning of 2012, it was a city of about 10 million. Only an estimated 5% had salaries, and the average yearly income was less than $100. On his journey to see how the conservation areas in bonobo habitat were progressing, Béchard traveled in deteriorating vehicles, on motorcycles and in primitive boats, and also on foot, typically resting and eating, it seemed, as the impoverished did.

He was studying an imperiled reality in which the bonobo is at imminent risk of extinction. The best figure I could find about their current number is 15,000 to 20,000, and it comes from the African Wildlife Foundation. To get a perspective on their distribution, the Congo is 3.37 times the size of Texas. And this is a country in which “bushmeat” is an important food source for its struggling people. After all, male bonobos as tall as five feet and weighing 100 pounds can feed a family.

In all the descriptions Béchard shares, the bonobo seem an endearing, harmless, and aware creature. Described as “charismatic,” it is receiving increasing attention by the media and writers. In a time when so many species are going extinct, the survival of this one seems especially important. This is not only because they are our closest living hominid relative but also because as Béchard has revealed, they do seem to have something to teach us about ways in which we humans need to change. 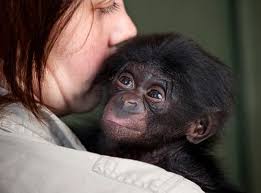 One story Béchard shared late in the book drove home the bonobo’s importance in the moment. To speed access, I will take it out of an enormously complicated context. An African devoted to wildlife during a time of war in the Congo was given an orphan bonobo just over a year old whose family had been slaughtered by hunters. The man and his wife decided to keep her rather than take her to a reserve. When they washed her, they were amazed at how affectionate she was, clinging and looking right in their eyes just like their own children.

They named her Henriette, and she learned very quickly. However, housebreaking was still to be accomplished when she went exploring around their home one day, including into the quarters of the family’s military guards. The men had been warned to keep their doors locked, but one failed to do so, and Henriette defecated on his bed. Infuriated when he found what she had done, the guard beat her to death with a stick.

The human ape attacked, and the bonobo child revealed how he needs to change. Of Bonobos and Men makes such a powerful impression that many readers, both male and female, will surely begin to awaken to ways to do so.

One Response to “Of His Journey to My Awakening”