Does the keyboard distance us too much from the Self?

This question has resulted from an interesting series of coincidences, and the idea to post on the subject came up as I was writing in longhand rather than at the computer. That, according to Julia Cameron, author of The Artist’s Way, is the gift of longhand. Ideas, I mean.

Almost every morning since I acquired Cameron’s book in 1992, I have, according to her instruction, gotten up and sat down first thing to write three pages of whatever comes out of my brain. These are called “the morning pages,” and they are the foundation assignment of a three-month curriculum designed to access creative potential.

I have found them to be very effective in this regard, and all the ideas that have come to me through the years as a result of this exercise have been extremely rewarding. According to Cameron, the pages seem to work with anyone who makes the effort, from scientific and legal types to people who know themselves to have artistic tendencies.

I am very particular about this writing exercise. I have to have black ink and a ballpoint pen with a fine tip that I can press. My handwriting has evolved into a combination of cursive and print, and I long ago abandoned the slant. 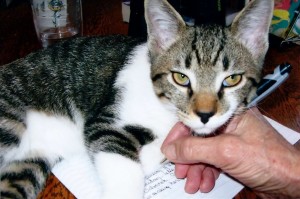 Style is such an individual thing, and I read a lot into what I see in the handwriting of others. Perhaps sister Kate’s cat Frankie sees something in my unusual script that he likes. When I babysat him for several weeks, he would often come and bed down on my morning pages.

Because I do pay attention to handwriting, I was struck by a sample I saw on a bulletin board recently. An adolescent girl whom I know to be intelligent and enjoying success in life had left a note there.

It was printed by hand, which I gather is the thing these days among the young, and I was struck by the irregularity of the letters, the absence of any aesthetic value in the print, and the lack of discipline in line and size of letters. The note looked to me as though it had been written by someone who is uneducated or intellectually impaired, which is not true. And she is probably a whiz with a computer.

I deduced from the sight of that note that schools are no longer teaching cursive handwriting. Correct. I checked and discovered that it is not included in the Common Core State Standards. My instinct is that good handwriting is important, and so I started to look into references that had come up just recently.

I will begin with Rudolf Steiner, who developed the concept of the very successful Waldorf School back in the early 1900’s. He was an Austrian philosopher, and his theory of alternative education is now established in private schools in some 60 countries, including the United States. Steiner incorporated calligraphy exercises to facilitate reading and writing.

How could this be? As it turns out, research with MRI scans has recently revealed the hand’s unique relationship with the brain. Apparently the sequential finger movements required in cursive handwriting activate large areas of the brain involved in thinking, language, and working memory in a way the keyboard does not.

And practically speaking, good handwriting is just an asset. I am not the only one who notices, and students who write legibly perform better on the essay portion of the SAT. As Steve Graham, professor of education at Vanderbilt University observes, “People judge the quality of your ideas based on your handwriting.”

However, there may be a lot more to handwriting than science has effectively plumbed. Julia Cameron believes that it is a way of accessing the Great Creator, as she puts it, and who knows actually what goes on among pen, hand, paper, mind, and soul?

That makes you think about the classics that have been cherished for hundreds, even thousands of years. Computers enable an infinite number of revisions, but what about William Shakespeare, say, with his quill pen? And do we even know what writing instruments were used in the era of The Iliad well over 2,000 years ago?

The slow writing process back in Shakespeare’s time–the frequent dip of pen into pot, the scratching on paper, the need often to pause and trim the nib–would drive us crazy today, but maybe there was an advantage to it. Perhaps a kind of meditation was afoot that facilitated getting it closer to right the first time. Will any modern literary works composed by computer eventually enjoy the same standing?

I know that, at the very least, the morning pages taught me, day by day, year by year, a lot about writing. And at a time in life when one must expend extra effort to maintain intellectual acuity, I am glad to know of the pen’s special relationship with the brain.

3 Responses to “On Writing: By Hand”