I ask this question because it is always interesting to review where we were when something of great historical significance happened in our lifetime. In The Sixth Extinction by Elizabeth Kolbert, which I have just finished reading, I learned that June 1980 was the month when the theory that an asteroid had wiped out all the dinosaurs 65 million years ago was first published.

In my own case, I was working in Houston in a giant high-rise in a job that required me to keep up on the news, and yet I have no memory of this breakthrough. In fact, I have so thoroughly integrated this information that I seem to have believed, until a few days ago, that we have “always” known it. 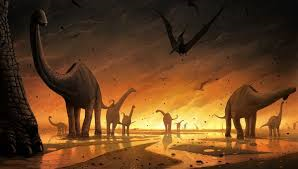 Even after this news broke, however, it took a further eleven years before the theory was generally accepted by the scientific community and the public. It takes a very long time for humans to adjust to an idea that rattles old beliefs.

So what belief got in the way of the truth?

It seems that people first began to become interested in fossils and the bones of prehistoric animals in the 1700s. I’m really summarizing from the book here, but although scientists had concluded by 1980 that there had been five mass extinctions, they assumed that these had occurred rather gradually. This perspective was called “uniformitarianism,” and it had been established in the nineteenth century.

When Charles Darwin came along, he became a uniformitarian too. Although the theory focused specifically on the means by which species had disappeared, he concluded that they could also be created through evolution over a similarly long period of time. Since his theory of evolution pertained to humans, it caused great anger and dismay among many Christians.

The uniformitarian perspective was largely responsible for resistance to the asteroid theory among scientists in 1980. Although various mechanisms for extinction were under consideration, including things like climate change and the acidification of oceans, a sudden cataclysm was not among them.

The asteroid theory was proposed by a father-son team of scientists. The father was a Nobel-prize winning physicist, and the son was a geologist. According to Kolbert’s book, rejection of the hypothesis was instant and particularly fierce among paleontologists, who must have felt as though their turf had been invaded. However, even The New York Times and Time magazine got involved in criticizing and flinging insults.

Oddly enough, the development of this theory was inspired by chance. In the late 70s the son of the team, Walter Alvarez, accidentally discovered traces of a sudden die-off of tiny marine creatures in a thin layer of clay in a gorge in northern Italy. He next discovered that the die-off aligned with the approximate date when the last of the dinosaurs disappeared. When the clay was assayed, it was discovered to contain an amount of iridium that was off the charts. Iridium is extremely rare except in meteors.

When Alvarez shared the discovery with his father, their teamwork began. Similar findings were discovered in Denmark and New Zealand, and the scientists proceeded to develop their hypothesis that an asteroid had brought the era of dinosaurs to a rather sudden end. It was estimated to have been six miles wide and to have impacted earth with the force of more than a million of the most powerful H-bombs ever tested.

In spite of the initial uproar, corroborating evidence continued to roll in. It peaked in 1991 with the discovery that a 100-mile crater in the Gulf of Mexico off of Yucatan was not caused by a volcano, as had been assumed, but by a giant asteroid. Now the Times  announced, “Crater supports extinction theory.”

If we think back to our own lives in 1991, the big news stories were about the Gulf War and the dissolution of the Soviet Union. Interesting that we’re still waging war in the Middle East and that Vladimir Putin is still chafing over the loss of empire. Change does, indeed, typically come slowly.

However, the asteroid theory, like the phenomenon itself, suddenly opened the door to a new reality, proving that things initially inconceivable can become credible to even the most brilliant and fierce skeptics. Perhaps this is one of the greatest gifts of the human species, meaning our capacity to learn something new, even if we don’t like the look of it, even if it violates long-held beliefs, even if it is horrifically inconvenient.

Of course that awakening occurs at different rates with different people.

The new idea driving Kolbert’s book is that human beings may be not only the cause of another mass extinction but also its victims. We are compared to an extremely invasive species that ultimately destroys its own habitat. The author treks through time to observe how and why certain species have disappeared and are currently dying out. In many cases, it is by human agency. In spite of the sadness that wells up, the reader is being given the opportunity to learn about behavior that must be modified if we are to survive–for a while longer.

I came away from The Sixth Extinction–a very good read, by the way–realizing that it would be unnatural, out of order so to speak, for the human species to endure indefinitely. How long we will remain viable is a very interesting question.

Homo sapiens has been around for only about 200,000 years. The dinosaurs, by contrast, endured for 145 million. The dinosaurs didn’t have our intelligence, but they did have something we don’t. They had plenty of space. We’re running out of space. I guess it’s up to our fancy brains to figure out how to make the most of what we do have. If not, our stratum in the earth’s crust may, in a few million years, be extremely thin. That realization is humbling, but then the truth sometimes is.