Since we are mostly water, one can’t help but wonder about its condition.

Another good New Year’s resolution would be to drink more and better water. For those of us who live in New Mexico, Pristina is now an option.

So why is Pristina a better bottled water? Jim McMath, who has spent the last six years getting it to market, explains it very simply. He has developed a process that replicates the way nature purifies and energetically charges water. It’s called “structured,” and Pristina is the only such product on the market. It is currently available at Whole Foods in Santa Fe and Albuquerque but will hopefully soon be all over the country.

Human beings are about 72% water, and we know that we should drink eight glasses a day to remain properly hydrated. (Symptoms of dehydration include constipation, headaches, lightheadedness, dry mouth, and dry skin.) The problem is that all water is not the same.

Jim explains that water’s hydrating value depends on its ability to form beautiful hexagonal crystals. We first saw these images through the research of the Japanese scientist, Dr. Masaru Emoto, which he shared in The Hidden Messages of Water. Structured water is hexagonal water. 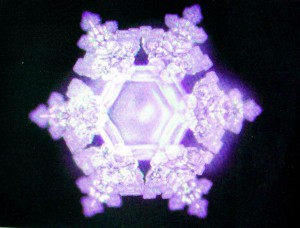 Jim has developed an exclusive and proprietary technology, defined as BioSynergetic Imprinting Systems™, that stabilizes water’s hexagonal structure after it is purified and energized. Its effectiveness has been verified by the IHM General Research Institute in Tokyo, which is the authorized representative of Dr. Emoto’s photography technique. By comparison, purified drinking water usually shows no ability to create the hexagonal crystals.

Dr. Emoto’s research also revealed that the hexagonal crystals could be damaged or fail to form for countless different reasons. Causes could include pollution, excessive heat, explosion, noise, electromagnetic waves, violence, even negative human emotions and vulgar music. (Pristina is impervious to such.) The movie “What the Bleep Do We Know!?” shared Dr. Emoto’s discovery that emotions like love and gratitude could enhance crystal formation while anger and negativity could impair it. Since we are mostly water, one can’t help but wonder about its condition.

Jim says that we should also be drinking water that coincides with the pH level (degree of acidity) of the healthy body. This is in the range between 6.8 and 7.2. However, the pH level of water that has been highly purified drops dramatically into acidic territory. Distilled water is the worst with a pH level of about 4.5. Jim describes it as “aggressive water” that is corrosive as well as difficult to absorb. The pH level of Pristina is 6.8. By comparison, Perrier is 5.5 and Penta is 4.2. The pH level increases tenfold at each number, so Penta is 800 times as acidic. By the way, the pH level of Coca Cola is 2.8, about 20,000 times that of Pristina. “It’s like drinking liquid acid,” Jim says.

I’m not an investor in Pristina but have been following its story for years and volunteered to do a post when the time was right. I’ve been drinking it for weeks and feel great, but that could be due in part to just focusing on the daily recommendation. Like most people, I get busy and forget. However, I think a major way to confirm its hydration benefit would be through athletic endeavor, and there is an informal case study Jim refers to.

He has a contact in Florida, who asked the  Jacksonville Jaguars football team to try it out. The plan was to drink it for a week and then go back to the players’ usual source of water and assess the difference. Two days into the second week, the guys hit the wall. Apparently the beating linemen take was making them so sore that they had had trouble sleeping at night. The hydrating effect of Pristina provided such relief that they they insisted on going back on it.

Water will become enormously important in the coming years, and Jim, whose early career was in community development, has a very large vision about how to face that challenge. It includes innovative ways to (1) recycle and purify what water we have, (2) use it with microorganisms to replace artificial fertilizer and grow healthier crops, (3) employ it in the production of alternative energy, and (4) create healthful bottled products beyond Pristina.

Jim’s sense of urgency about advancing on all these fronts has been informed in part by the work of yet another gentleman whom I would like to mention. I’m referring to Viktor Schauberger, an Austrian naturalist and pioneer of eco-technology who died in 1958. This was decades before Dr. Emoto took the first photograph of a damaged water crystal, but Schauberger had long known about the danger afoot. 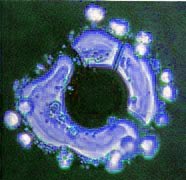 His ideas were discredited in his own time, but a book about his work (Hidden Nature) was published in 2003. He saw water as a living organism whose ability to create life and to heal was being destroyed by the ways we pollute it, treat it, and transport it. He predicted that if we continued to consume this “sterilized and physically destroyed” water, we would degenerate into “cancer-prone, mentally and physically decrepit, physically and morally inferior individuals.”

What a bleak picture, and the news worldwide is indeed bleak on many days. One can’t help but wonder . . . In fact, I’m going to stop right here and make a run to Whole Foods for more Pristina.

Note: Both the Johns Hopkins Medical Research Facility and Los Alamos National Laboratory are involved in confirming the health benefits of Pristina and its structure.