The British are the keepers of civilization.

How funny that, within hours of posting on the evils of TV yesterday, I would experience another example.

I had accompanied a friend to her appointment for a colonoscopy and immediately discovered that the attractive waiting room at the clinic was also furnished with a very big TV screen. Of course it ran nonstop the entire time, perhaps some special programming subscription for waiting rooms that blessedly included no commercials.

You’re not allowed to leave once you’ve arrived at the endoscopy clinic with a patient, so I was trapped with the TV for nearly two hours. My friend was having the test done because her doctor said to, not because she had any symptoms. Almost like an assembly line, one patient after another was called in, never to return. The exit was in the rear of the building.

My friend said that the procedure would cost about $1,000, so I must have seen about $6,000 in revenue move through those doors. The doctor was going to do sixteen procedures that day. A good day, I would say.

Meantime I was struggling to read my book. Most of what I read is nonfiction and pretty hefty; so I had had this urge, for pure enjoyment, to reread perhaps my all-time favorite novel, Katherine, by Anya Seton. Placed in 14th century England, it tells the most romantic love story in British history, that of Katherine Swynford and John of Gaunt, the Duke of Lancaster.

It first came out in 1954, a beautifully written and thoroughly researched work of about 500 pages. I was captivated by it as a teenager. As soon as I opened it again, I was watching for this passage where Katherine’s hair, the “dark red of an autumn leaf” would be burnished by a handmaid with a silk cloth. 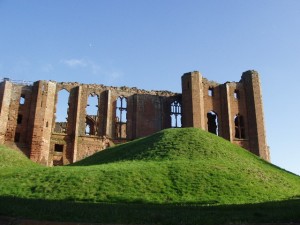 Kenilworth Castle, Once Restored by John of Gaunt

The book is as wonderful as I remember, and it made me nostalgic for England, for those quiet pastoral scenes, the little gray village churches, and the castles, cathedrals, and even ruins rising from immaculate green lawns. I had actually lived for a time in Lincolnshire where the story begins. It is the fen country, where my dogs avoided groves that harbored signs of witchcraft.

Even though I was engrossed in the story I remembered so well, the TV kept intruding. Have you ever noticed how fast commentators talk, as though they are on speed or may be hyperactive? And there was the usual agitated vying for the camera, the dramatic issues, and the competition for the most telling points. Below ran a little banner of breaking news. This afternoon it was about the student in Cypress, Texas, who had stabbed fourteen people.

“Great,” I thought irritably. “The pro-gun lobby will use this: ‘Shall we now require that knives be banned? That all sales be registered? It’s not knives that stab people. It’s people that stab people!”

Mayhem was also afoot in my book. John of Gaunt was in a white-faced rage because a script had been posted on the cathedral door claiming that he was actually a changeling and not the son of the king. I know that his fury and the drive to avenge his honor will create havoc in the kingdom. And further, soon accusations will surface that he arranged the murder of Kathryn’s former husband.

Damn it! Would you please turn that TV off!

I didn’t say that but I wished I could erupt: “What care I about the tiresome rant of these misbegotten commoners? Be done with this turgid malice! A kingdom is at risk!”

The door opened, a nurse beckoned, and I put my book down. Regrettably, the TV would go on. I gathered up my friend, who was just fine, and I drove her home feeling a little worn out by my waiting room experience.

Later that day I discovered an email from a friend taking issue with my opposition to TV. She is British and she watches the kind of shows, including PBS news and programming, that would be required viewing in a country run by an enlightened regent. I reminded her that her taste is refined because she is British, and the British are the keepers of civilization. They used to be anyway. I hope someplace is.