“They have your information. There is nothing they don’t have.”

My IQ is not as high as I wish it were, but that of my computer expert compensates. I thought I should share.

A coincidence is afoot. I did something potentially unwise on my computer a few days ago, but John Corey was already scheduled for maintenance, so I was safe. While he worked, I interviewed him and learned many valuable things.

The potentially unwise thing I did was take an IQ test from an unidentified source and pay for it by credit card. The issue had come up through humorous email with two branches of southern cousins. When I told John what I had done, he volunteered his IQ. When I told him mine, he said “Hmm. I would have expected it to be higher.” Ah, well.

I have worked with John through many problems and five computers over the last seven years, and he is a real veteran plus a major brain. He has both computer science and engineering degrees and was a network engineer for the Navy, General Telephone and Electric (GTE), and the Treasury Department for many years before working as a consultant and then in his own computer repair business. 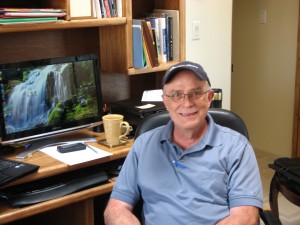 He has funny stories to tell, including about a man who called him back a few hours after John had returned his thoroughly serviced equipment. Of course, computer activity leaves footprints, and John went straight to the point:

“Are you looking at pornography?” he asked.

That was a good opening for a stream of advice for me and the general public, which included some of the following points:

1)      Don’t purchase anything online unless you are dealing with a national corporation whose reputation depends on a sophisticated and secure web site.

2)      If you have just one computer in a family, you should have two accounts. One is the administrative account that can be accessed only with a password. If you have underage children, consider a parental control package.

4)      Read the screen. John said he couldn’t emphasize this enough. If something that looks like an update pops up in odd language, leave the site.

5)      Read the screen. If you have a technical problem and the screen is providing information, copy the material down. It may be invaluable to someone repairing your computer.

6)      If something feels wrong, trust your instincts and get help.

7)      If your computer slows down noticeably, this may be the first sign of a virus.

8)      Never leave your computer for a long time, meaning several hours, with the Internet open. It could be vulnerable to a virus.

10)  Have your computer serviced regularly to forestall problems.  An annual checkup is basic, but usage drives other maintenance. Businesses should have computers checked every two months.

John waxed philosophical about how the world is changing through computers and observed that our generation is the last one accustomed to communicating with one another face-to-face. In observing the young people who have grown up with computers, he commented that they are confused about the difference between information and intelligence.  He quoted an early professor responding to a request to be shown how to fix something. “I’m here to teach you how to think,” the man said, “not how to fix things.”

The theory is that if you learn the basics, you will have the ability to fix whatever. If you don’t know the basics, you should probably get expert help. John said that his most difficult customers are those ages 25 to 30. When they have an issue, they will often try to download some software to repair it, compounding the problem. “It’s like Googling a site to find out how to remove a brain tumor with kitchen utensils,” he said in exasperation.

From there the discussion moved into Internet security, and he quoted a customer. “I don’t want them to get my information,” she said.

“They have your information,” John responded. “There is nothing they don’t have.” And then he went through all the different entities that have access to one’s Social Security number, financial information, and communication data.

I asked him what he thought about Edward Snowden. He said that he is a little perplexed about his motives and doubts that the information he has is as damaging as we might fear. He thinks that the US is working as we speak to figure out a way to get Snowden out of Russia without embarrassing them. He imagines an airplane painted with a Latin American airline logo and fully staffed with US security personnel. After taking off with Snowden on board, it will detour to Germany.

“Interesting,” I said. “Do you mind if I put this in my blog?” And he approved.

So now we can just watch and see. And if you ever need computer support in Santa Fe, you might want to call John Corey at 470-9321.