“Hispanos have a rich folk tradition about coyotes and have long said that the only thing smarter than a coyote is God.”

The title of this post sounds bossy, I know, but there’s a reason. My interests have recently taken me in humbling directions–now with unsettling discoveries about the coyote. I have been enlightened by  a splendid new book by Dan Flores called Coyote America, and I would like to share that experience.

Flores is a Louisiana-born professor of Western History who has retired just outside of Santa Fe. His biography includes a list of books, articles, and awards as long as your arm. I’m sure this book will be renowned, possibly as a catalyst for a new form of American transformation.

I have seen coyotes many times over the years in Texas and New Mexico, most recently when one dropped by the outdoor terrace of a restaurant where I was dining with a friend. The animal struck me as female, just curious about the menu.

I’ve always admired their toughness, although I have to admit that they seem a little scruffy compared to the wolf and fox. Flores describes their coat as a “cinnamon buff” color on a small, lean body with a sharp face and disproportionately large ears. Perhaps the lack of aesthetic appeal has contributed to a prejudice that ultimately turned them into the most persecuted animal in America. How ironic, when it had once been the most venerated. 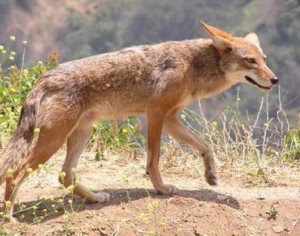 Yes. Flores explains that the indigenous people of our continent had, through close observation of its intelligence and survival skills, become enchanted with the coyote. They created hundreds of stories about clever ways that often illustrated “the foibles of human nature.” In fact, because these stories seemed to provide a form of guidance, Coyote became the first deity of North America. This was long before it would also be known as the “trickster” whose cleverness sometimes worked against him.

So what changed? Well, the land over which coyotes had ranged freely for millennia was suddenly invaded by cattle and sheep. As other prey disappeared, wolves were large enough (as much as 120 pounds) to take the adult livestock down. Coyotes (max about 40 pounds) would feed on the carrion and go after calves and lambs if they too were not killed by the wolves, an implacable enemy. As this new pattern developed, both wolves and coyotes were perceived as predators that needed to be exterminated. The Bureau of Biological Survey, a department of the federal government, took this on as a mission in 1924.

The story is complicated, but even as the gray wolf was rendered almost extinct in 48 states, the coyote endured. The question became how to exterminate the species as quickly as possible, and the Bureau of Biological Survey built a lab in Albuquerque, New Mexico, to experiment with “predacides.” Over the ensuing years, the Bureau’s professional hunters killed literally millions of coyotes with three primary poisons.

The first was strychnine, which sent the animal into convulsions, creating a “wrenched, alien shape, ” as Flores describes it, “easily visible against the landscape, its tail sticking straight out and frizzed as if the animal had been struck by lighting.” Then came  thalium sulfate, a rat poison that killed slowly, blinding the coyote, destroying the pads on its feet, and causing its hair to fall out so it would freeze in the cold. Finally there was sodium fluoroacetate, later known simply as 1080. Within an hour or two the poisoned coyote would go into grotesque convulsions, begin howling and crying pitifully, and then get up and run until it died. Of course poisons distributed in bait also killed countless other creatures in the food chain.

I had to put Flores’s book aside for a day after reading this chapter. I couldn’t comprehend how, after seeing even one creature die in such indignity and agony, anyone could continue to use these poisons. However, our government had concluded that the coyote was the “archpredator” of America, and the idea caught on. Anyone, anywhere, was free to kill as many coyotes as possible. 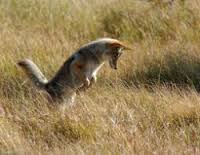 It wasn’t until 1940 that two scientists, brothers ten years apart and working in two different locations in Wyoming, studied the contents of stomach and scat to discover what coyotes actually eat in their undisturbed habitat. According to Flores, “rather than being archpredators of game animals, coyotes turned out to be omnivorous generalists.” Their chief prey were mice, gophers, and hares, but the samples revealed twenty-eight different mammals, ten birds, fish, insects, and plant matter.

So the coyote had gone after livestock simply to survive when farming and ranching began to eliminate their usual sources of food.  And they had other means of surviving:

As I said, this is a very complicated story, and I can’t do justice to it here. It becomes uplifting as one gets beyond the dark history to follow the trail of the coyote making its steady and determined way toward triumph. It has outdone the government and transcended the implacable hatred of the ranchers, farmers, and every individual who has, in ignorance, embraced the idea that it is unworthy of life.  It is now present in every state in the United States except Hawaii; and since it has actually swum to Cape Cod, it may conceivably find its way across the Pacific Ocean as a stowaway.

In the 60s, the tide began to turn as an environmental movement gained momentum. To leapfrog through history, here are some examples of gains:

As Flores puts it, the Endangered Species Act represented America “at its best and most noble,” but that spirit could not be sustained. By the 1980s, environmentalism was being identified by conservatives as a threat to free-enterprise capitalism, thereby endorsing the ongoing and avid killing of the coyote.

The Bureau of Biological Survey now uses armed hunters in airplanes to attack, and coyote killing contests continue to flourish all over the United States. In fact. New Mexico missed the opportunity this spring to be the first state to ban them.

Nevertheless, I concluded through my reading of Coyote America that the tide is turning, that the awakening that began in the 60s will actually now intensify. This is due to the evidence that the current administration’s budgetary attacks on environmental protection will inflame activists as never before. An amazing irony may also be afoot.

As I have written before, Jungian analysts have made the case that President Trump embodies the archetype of the trickster—the coyote in Native American lore. His budget cuts may significantly impair the effectiveness of the Bureau of Biological Survey, which has been, for almost 100 years, the federal entity most dedicated to exterminating the coyote. This is one cut I highly approve.

In conclusion, climate change may soon serve to elevate coyote’s stature. It is likely that young people uninfected by the prejudices of their forebears will see the coyote through very different eyes. Needing guidance about how to survive a treacherous new reality and informed by the research and storytelling skills of people like Dan Flores, perhaps they will one day enshrine the coyote as the official totem of America. 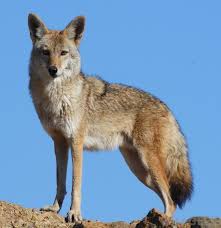 Want to hear the sounds of the coyote?  Click on this link. And if you would like to hear a pack’s response to elk whistles, go to about minute 1.21. They do indeed sound wild.