Back to basics. It’s time to harvest the castings from my composting worms.

Working with the worms, red wrigglers (Eisenia foetida),  is always a thoughtful time. Such a simple creature and yet the source of so much wisdom.

My worms live in a double-tiered bin in my garage, their presence the outcome of an interest launched about 13 years ago. Sister Kate got into the worm business as a sideline to her software consulting. When I volunteered to produce some promotional materials for her, I became fascinated. Later I was actively involved for a couple of years in the physical labor of the worm farm and helped with presentations at conferences and events promoting organic farming in New Mexico.

Teachers coming to conferences on sustainability often commented that they would love to use the worm in the classroom. “I know how to do that,” I thought, and it turned out that I did–with the help of someone working on a Ph.D. in education. The result was The Red Wriggler Teaching Manual, which created worm-related activities to teach science, math, and language arts. 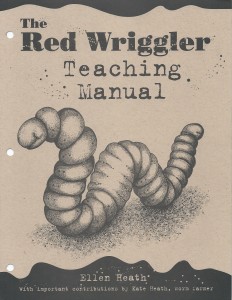 For five years after its publication in 2007, I used very simplified versions of the materials to teach a class every other week in Acequia Madre Elementary School in  Santa Fe. Known as “the worm lady,” I had a wonderful time working with third-grade students under the watchful eye of a veteran teacher who was also an environmentalist.

I had learned great respect for the worms in my sister’s worm barn, and there were two concepts that seemed especially important to share with students. One was the way in which the worm went about its business, one tiny mouthful at a time. Undismayed by piles of horse manure and rotting produce, they became emblematic of the virtues of both patience and determination, as in “Yard by yard life is hard; inch by inch it’s a cinch.”

The second concept was the way in which the worm served as an alchemist. These scientists of  the 16th and 17th centuries often drove themselves insane using mercury to try to turn base metal into gold. The red wriggler remains healthy while turning all sorts of smelly garbage into a fragrant soil amendment so valuable that it is called “black gold.” It retains moisture, is rich in minerals and microbes as well as organic material, and makes soil porous and malleable.

On the second day of class I brought worms to school, but I had to get something straight before proceeding: “It is a myth that if you cut a worm in half, it will turn into two worms. To survive such an experience, a worm has to retain at least 13 segments. At worst you will have a dead worm; at best a wounded worm.”

“Nuts,” I could imagine the little boys thinking.

In the course of my classes, we covered some of the environmental problems afoot in a world heavily dependent on chemical fertilizers. Healthy soil is filled with life in the form of microbes, as many as billions in each tablespoon. By comparison, farmland that has been heavily treated with chemicals may have only a hundred or so.

The gut of the red wriggler is kind of a  microbe factory, which is why it vastly accelerates composting. When the castings are worked into the soil, they can bring damaged areas back to life. In  Santa Fe, where there is great interest in organic food and sustainability, these children were learning that the composting worm could play an  important role in healing the troubled earth that they will inherit.

In my own life, I have always liked the way these little guys provide a sense of energetic companionship. I have to admit that I often have them in mind as I shop in the produce section of the grocery store. Because they do best with vegetables and fruit and can’t handle things that are salty, spicy, or acidic, I eat more healthily myself.

In fact, my worm classes taught the children a little about sex, my patron teacher always a present observer.

Like other species of earthworms, the red wriggler is both male and female. They worms mate going in opposite directions, delivering sperm to each other’s storage sacs. I would demonstrate the process with two stuffed worms created by a friend who is a skillful quilter.

When the mating is accomplished, the segment called the clitellum begins to harden. It slips off the worm like a ring being removed from the finger, collecting eggs and sperms in storage and mixing the two together. Separated from the worm, the clitellum forms into a cocoon from which two to four hatchlings will emerge.

I never knew what third-graders might extrapolate from this description. However, I always hoped that the matter-of-fact biology would help them deal with the rapidly evolving concept of acceptable human sexuality. Nature is extraordinarily creative in the matter of mating.

Working with the worms was frankly kind of a humbling experience. With regard to their ability to turn garbage into gold, I cannot imagine a way in which humans similarly benefit the earth. We’re not done yet, however, so perhaps we’ll think of something.

And just think what the world would look like if composting with worms became “the thing to do.” Castings on lawns, in the gardens, in the fields. The Garden of  Eden would sprout anew.

The worm farm is no more, my patron teacher retired, and my attention shifted to writing a novel and this blog. I still have a few of my teaching manuals left, however, and would like to share the wonders of the worm with anyone who is interested. I’ll mail you a copy if you send me your address at ellen@celeryellen.com.

Consider the gift a reward for reading my blog, and I hope you and the red wrigglers will live happily ever after.