A great photograph can explode the totality of our world, such that we never see it quite the same again.

There are so many things to be fixed in the world, and the above quote from a National Geographic article last fall offers a sliver of hope. It makes one think of a sea change that would trump the need for a sea of initiatives. A photograph that appeared on the front page of The New York Times Sunday reminded me of the quote. The irony afloat is so heavy that I thought I should write about it before it sinks below the waves of awareness.

This is complicated, and I want to say at the outset that I know nothing for sure and am proposing nothing in particular. I am in a state of puzzlement and wondering, and it is all about feminine responsibility in the world. I thought we were making a great deal of progress, but in at least one important way we seem to be regressing. The fundamentalism that has erupted in the Middle East is mirrored in the United States by extreme conservatism that disadvantages the feminine.

Most specifically, the abortion rights that women won in Roe vs. Wade in 1973 are rapidly being abridged. Over 200 measures restricting access have been passed in 30 states over the last three years, and more are in the wings. There are many medical technicalities involved in the debate as well as religious dogma. However, the bottom line is that the ability of women to make the most personal decision imaginable is under attack.

Nevertheless, we have enormous freedom and opportunity in the Western world, unlike our sisters in the Middle East. The photograph that launched this post revealed the difference. Unfortunately, I can only provide a link to it at the end, but I will proceed by comparing it to a famous portrait I can post. 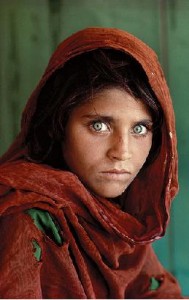 The photo to the right was taken in 1984, and it is of a young Afghan woman named Sharbat Gula. She was in a refugee camp in Pakistan at the time, and the stare of her sea-green eyes, as writer Robert Draper put it, “drilled into our collective subconscious and stopped a heedless Western world dead in its tracks.” But here comes the irony.

The New York Times photograph I cannot show is also of a young Afghan girl. This one stands faceless, draped in a dark robe as though she is a symbol and nothing more. In her arms is an eight-month old little boy, his distraught face that of a wizened old man. His name is Samiullah, and he suffers from malnutrition that is now rampant among children in Afghanistan. There are different types of malnutrition, and the one Samiullah has makes his flesh hang in wrinkles, as though ancient, uncorrected evils have aged him from birth.

It is almost 30 years since the the photograph of Sharbat Gula touched the world, and circumstances for women in Afghanistan may well be worse. I was amazed to read that even though so many are starving in that country, women are nevertheless having children one after the other within a year of each other so that they cannot nurse adequately even if they were  themselves well-fed.

We know that heart and mind affect our physiology, and so it is amazing that these women remain fertile under appalling conditions. One wonders if it would be possible to mobilize inner resources to block fertility, compelling the body to abide by the will, as in “I shall not bring one more child into this world to starve to death.”

And I can think of many reasons, even in countries where women are much more fortunate, to block a birth. The list could be much longer: “I shall not bring one more child into this world to live in poverty; to be disdained and resented by others; to be sexually, physically or psychologically abused; to be raped by the enemy; or to killed or wounded in body and mind in yet another war.”

In fact, it does not seem to me at all unjust or improper for a woman to make such decisions in a commitment to a higher good. This is not, in fact, an idea alien even to men. Way back in 411 BC, Aristophanes wrote a play about a woman named Lysistrata who convinced the women of Greece to withhold sexual privileges until they negotiated an end to the Peloponnesian War.

Withholding is the key word here, and in these modern times women have a larger array of options to decline to bring a child into a situation until it changes for the better. The collective feminine has so far largely refrained, for whatever reason, from setting requirements for bearing a child.  That is a power position and one not to be acted on lightly. However, we could stand on it to birth a better world that we have conceived.

When one looks at Samiullah’s mother in the photograph in the link below, it is possible to imagine what it would feel like to be both a victim and invisible. There are those in this country who would choose that for women. For the sake of our sisters everywhere, perhaps we should not allow it. Just a thought.