Read nature; nature is a friend to truth.

As we move toward November 8, a walk in the woods would be a great way to escape election stress and prepare for whatever comes. The natural world can be the source of very wise and explicit counsel in that regard, something I learned guided by a beautiful Samoyed named Cassie. 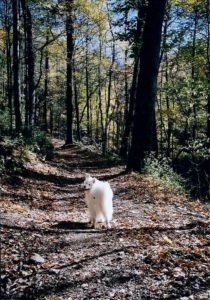 Cassie came into my life 20 years ago with a move to Nashville, Tennessee, and a radical change in lifestyle. Acquired to enrich the occasional visits of my husband’s children, she became my own constant companion. A nature preserve was nearby, and we began our walks there when she was still a puppy. A walk with a dog is a very different experience from a walk alone, and it was fun to see the natural world come alive through her senses.

Following her example, I too became an acute observer. One morning as we set out on the trail, I seemed to hear a voice among the trees: “Oh, good. We’ve got a live one,” and as though the source were showing off, the wonders multiplied.

Eventually it occurred to me that I could take a camera with us, and I began to record experiences that I was learning how to “read.” When struck by a particular sighting, I would go home and research its meaning in books on symbols, Native American lore, and the language of nature as interpreted by naturalists with a toe in metaphysics.

Over the first nine years of Cassie’s life, we pursued that woodland curriculum through a series of homes in Virginia and Alabama as well as Tennessee. Eventually I began to walk troubled by the questions of whether, when, and how I would leave my marriage. Due to the ways in which I had changed, I no longer felt that I belonged in that life or in the role I was playing, and the need to act on that knowledge was becoming steadily more pressing.

My walks became those of a seeker trying to understand my issues, and one image after another presented to clarify. For example, there was a tree with ragged bark that symbolized my state of mind and all that I would have to shed if I moved on–a rich history approaching two decades, a family I deeply cared about, a certain standing in life, and the approval of my siblings who would not understand.  On the other hand, a dead tree with confused branching warned about the cost of failing to make up my mind. 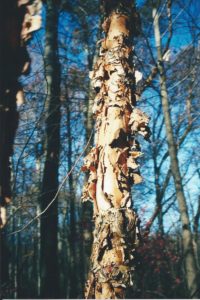 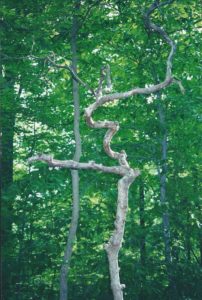 Other trees seemed to illustrate the challenge of partnering. Sometimes trees merge in a very tight space. There was one case in which the relationship seemed to work–but maybe better for one tree than the other.  In another, the partnership was clearly unequal, the aspen so much smaller, its slender trunk engulfed, its eyes more like mouths screaming for help. 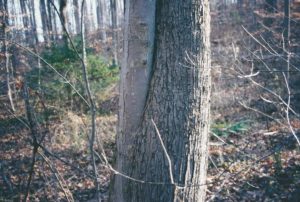 A Partnership that Worked 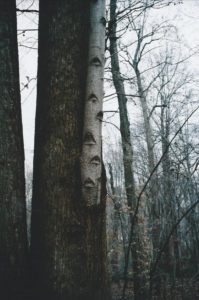 In a third example, only one species of a pairing had survived. It was impossible to know the identity of the partner that had twined at the base of the one that endured, but it had left behind a visually disturbing deformity that suggested the damage my own departure  might cause. Perhaps the ideal of partnership was visible in two fall leaves clinging like perfectly matched equals to the branch of their foundation tree. Were they together until the end? I would never know. The image didn’t resonate. 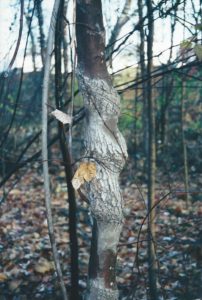 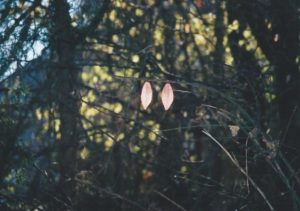 Fungi were also very evocative. One year in Virginia there was a fascinating array of species from the beautiful to the downright icky. 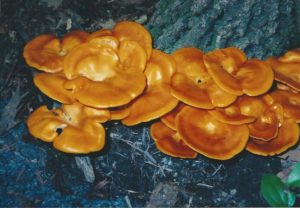 A Community of Fungi

Some vividly illustrated the difference between living in community and as an individual. The former sometimes seemed a bit crowded, even stressed to me.

But did the solitary toadstool look lonely? 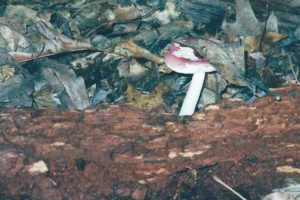 Two other specimens revealed the hazards of upward growth. One seemed injured and bloodstained, as though the birthing of a new life had been difficult. 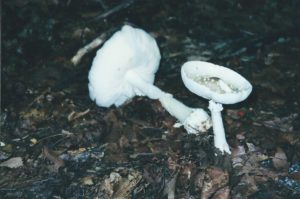 The Danger in Overreaching

Another had toppled to the ground as the result of a big head or overreaching. This pertained to the desire to “make a difference” on my own.

All these examples were helping me process my issue, but life was complicated, unfinished business yet to attend to including one final move to Birmingham, Alabama. Here the imagery seemed to become more pointed, as though I wasn’t “getting it” fast enough.

One day Cassie and I were walking near a lake in Oak Mountain State Park when I heard a few feet to my left the sound of something falling on the ground with a little thump. There among the leaves lay what seemed to be a juvenile bat, and as I watched, its life ebbed away. A nocturnal creature dropping out of the morning sky nearly at my feet was a real attention-getter. Research revealed that the bat is associated with the near-death experience that leads to shamanic wisdom, a message that a rebirth would come out of a time of impending darkness. 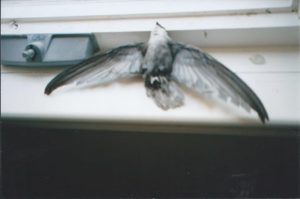 The Failure to Escape

Weeks later, I returned home from a lengthy trip to discover a dead bird caught between a shutter and the glass of a window. It was a chimney swift that had somehow found its way upstairs to my office in a very big house with many rooms and windows. The wood on the sill was spattered with poop, and the glass was scarred by beak and claw in the frantic effort to escape. Beyond the glass lay freedom, green trees, grass, and flowers, but the little bird had died on its back, claws curled, wings wide open.

As tension mounted, one final, very pointed–pardon the pun–lesson appeared on a woodland trail. What I call a survival knife lay before me unopened on the ground. Its message could hardly have been more obvious: Time to cut ties, time to make a clean break, time to cut and run.

And I did. An agreement was soon reached and arranged and the 11th anniversary of that break is just a few weeks away. On Thanksgiving Day, 2005–family all elsewhere–Cassie and I loaded up my Prius in Birmingham and hit the road for Santa Fe and a new life. 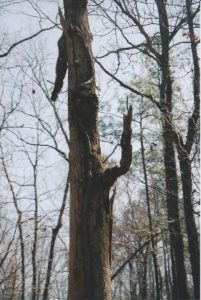 Before we left, however, I took one last photograph, which would close the collection of images representing my woodland journey to a decision. It was another dead tree, branch lifted as in farewell. I imagined “See ya!” in the gesture, but I knew I would never be back.

And so I finally crossed over that threshold known as the time being, which poet W.H. Auden described as “the most trying time of all.” This moment in our national history is also a very trying time being. It’s good to be reminded that coming to the end of it will be a kind of escape, beyond which we will have the freedom to create a better life for all in this country.

And I think it’s safe to say that part of that effort should involve preserving as much of the natural world as possible. It has always been a wonderful escape from the turmoil we tend to create, and there is also wisdom and guidance there about how to do better, if we will just pay attention.

5 Responses to “Remembering the Natural World as Counselor”