We consider the dolphin’s serene, benign, and undistinguished (by our standards) sojourn in the deeps and wonder what that big brain is for.

Over the last week or so, I have received many emails urging me to sign a petition protesting the Navy’s plans to test high-frequency underwater sound that will kill an estimated 1,800 whales and dolphins over the next five years and deafen about 16,000 more. As I read the material, I wondered irritably why human beings are such a menace. And then I remembered an explanation.

It had appeared in a book of essays by the late archaeologist Loren Eiseley that a friend had recommended five years ago. I had never heard of Eiseley, who died in 1977, and I was amazed by the way his gifts as a writer had bridged the worlds of both science and philosophy and had also made him a prophet of the environmental crises we are currently facing.

The title of the book was The Star Thrower, and a chapter called “The Long Loneliness” focused on the nature of the bottle-nosed porpoise or dolphin. He referred to them interchangeably throughout, but I will stay with dolphin to avoid confusion. 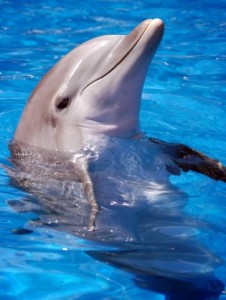 Eiseley was pondering recent discoveries that the dolphin’s brain was 40 percent larger than man’s and “just as complex in its functional units.” Research was also revealing a very social mammal that would rescue other dolphins in distress, could vocalize up to the threshold of speech, and could confidently navigate  frightening depths through the extraordinary gift of echolocation.

Nevertheless, human intelligence has become our universal standard. We value above all our ability to shape our environment and cannot comprehend the intellectual life of a creature that is incapable of such.  We consider the dolphin’s serene, benign, and undistinguished (by our standards) sojourn in the deeps and wonder what that big brain is for.

According to Eiseley, we differ first and foremost in the fact that, whereas the dolphin has a “paw,” we have a hand equipped with that revolutionary prehensile thumb. It was the hand that enabled man to become a toolmaker, an artist, a writer, a builder and a creator of weapons. It was a hand “noted for its ability to open assorted Pandora’s boxes,” as Eiseley put it.

He suggested that we reexamine our sense of superiority by imaginatively entering the dolphin’s kingdom and its body while retaining human intelligence. We would sacrifice all our possessions as well as our hands but take with us our native gregariousness, which is comparable to that of the dolphin.

We could explore, but we could alter nothing. We would see death and waste in many forms but be unable to do anything about it. No matter how much we wondered at what we saw, we would not be able to experiment. At best, Eiseley said, we would “nuzzle in curiosity a passing ship bottom and be harpooned for our pains.”

Eiseley imagined an actual return to the sea as a “deserved penitence” that would take from us the devastating power to wreak our thought upon the body of the world. We would instead acquire the ability to communicate with the dolphin, which “would break, perhaps, the long loneliness that has made man a frequent terror and abomination even to himself.”

I’m sorry that the sound testing issue has come up, but the petition is evidence of an awakening afoot that would have pleased Loren Eiseley. And he was one of the early thinkers, I now know, who became the catalysts of this change.

2 Responses to “Save the Dolphins”