So what is your shamanic power animal?

In my earlier post on petroglyphs, I wrote about how they are associated with shamanism. This reminded me of my own experience with this ancient practice. It is recorded in Lizard Diary, which I self-published in 2001. 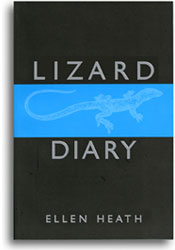 Let me say at the outset that this is not a plug for my book. A couple of years after its publication, I abdicated any financial interest in sales. The whole story is complicated, but I realized that my former husband, who would ultimately be enormously successful in his career, was not advantaged by the fact that his wife was regularly communing with a lizard. I had published under my maiden name, but . . . .

Oddly enough, the book has had a life of its own. I just checked Amazon at “Lizard Diary by Ellen Heath,” and under “More buying options,” the price has risen to $79.50 for a new copy. Hmm. Did it become important while I wasn’t looking?  Oh, well.

My engagement with shamanism occurred in 1996 at a time in my life when I needed guidance. My sense of identity had been bound up in my career, and with a move from Houston to Nashville, my focus shifted to “keeping the hearth,” so to speak, to create a beautiful home for my husband and maximize time with my three distant stepchildren. That all sounds very conventional, but even on my first visits in search of a house to buy, Nashville pitched me into sensory overload.

For one thing, I was affected by elements of the beautiful city’s history that were disturbing. There was the imprint of slavery and the Civil War but also the Trail of Tears. Like all the tribes in the Southeast, the Cherokee were forced to move to unsettled land west of the Mississippi by the Indian Removal Act of 1830. Some 4,000 Cherokee died on that dreadful journey.

I don’t remember learning anything about the Trail of Tears while growing up in El Paso, but one day when I was thrashing around in the Nashville library trying to figure out why my scalp was constantly prickling, I came upon the story. The Cherokee of eastern Tennessee had passed through Nashville on what would become known as the Trail of Tears. I stared at the print, realizing that I knew about this. Somehow I knew about this.

That discovery added to my perpetual sense of unease in our handsome new hilltop home in the suburb of Brentwood. Eventually, I would conclude–as the result of a psychic’s input–that it had been built on the sacred ground of indigenous people. I eventually discovered nearby a historic marker about such habitation around 1200 AD.

My initiation into Nashville seemed to have activated some kind of psychic software I hadn’t even known existed. And then came the coincidence that enabled me to turn it on.

A new friend, our interior decorator, realized I needed help managing stress and recommended a massage therapist named Kathryn. She also turned out to be a shamanic practitioner–in Nashville?!–who would become one of the best friends of my life. And now for another coincidence. 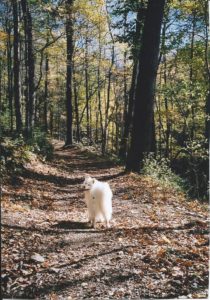 To make the children’s visit more fun, my husband and I had acquired a puppy we named Cassie. She was a Samoyed, the third of the breed that I had owned, and her species originated in Siberia. The Samoyed people are shamanistic, and Cassie soon became my guide and teacher in the natural world that opened to me through my own experience with it. From this remove and due to all the coincidences, this development seems inevitable.

My introduction to the practice began with Kathryn’s offer to do a soul retrieval and also to identify my power animal. I was in the mode of “doing research” through this experience; however, I immediately settled comfortably into its ritualistic launch. As I lay listening to taped drumming while Kathryn journeyed in “nonordinary” reality, I experienced for the first time the way my own mind could travel into a zone of “anything goes” imagery and activity.

The idea behind soul retrieval is that, due to some trauma in life, an individual may experience “soul loss,” or some degree of it. One goal of shamanic practice is to bring it back, which is possible only if it is safe to do so. For example, it cannot happen if the soul loss has resulted from some form of abuse that is ongoing. This idea resonates with some psychotherapists who have noted the difficulty of working with an individual who doesn’t seem to be all there.

I wasn’t aware of any form of soul loss, but when Kathryn returned from her journey, she described three different episodes that did relate to my life in ways she could not possibly have known. One of them pertained to the unexpected death of my father when I was 16. The other two were not serious, just constructive.

Kathryn also came back with my power animal. The idea, according to Michael Harner, anthropologist and founder/director of the Foundation for Shamanic Studies, is that each of us has a guardian animal spirit that has chosen to serve us. This idea emanates from a mythological past when animals and humans were one. When an individual becomes aware of this guardian presence, it can greatly enhance personal power in the world.

When Kathryn discovered that a lizard was my power animal, she was initially concerned that I would be disappointed. Wouldn’t anyone prefer something like a tiger or an eagle or a horse? To the contrary, I was immediately delighted. After all, I had grown up with lizards in El Paso, and I liked how fast they moved. 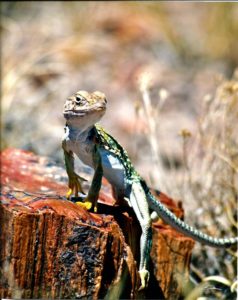 And, really, Lizard turned out to be a wonder. He is a bit of a character, sort of chameleon-like in shape, size, and garb (he is costumed at times) and in his ability to run, fly, swim, whatever. Supposedly, this versatility is an indication of power, and he had/has plenty.

I can still, after more than 20 years, access his guidance at any time. And to give you an idea of Lizard’s personality, he will probably appear in some natural setting, picking his teeth in pointed reminder that it’s been a while.

I need to bring this initial entry to a close, but a priceless benefit of my experience with shamanism is the way it connected me with the natural world. Practically every creature in it is associated with myths, symbolism, wisdom, survival skills, and teachings that enrich awareness. And why is that important when the natural world is perishing moment by moment? Well, duh!