It is primarily through relationship that we grow. Will computers get in the way?

A newspaper coincidence has inspired another blog. The idea this time came from two places in Sunday’s New York Times. One was an  article on the growing field of  biometrics, in which a person’s facial features can be converted into a mathematical code or “faceprint.”  Another was the old-fashioned “Vows” section of the paper featuring the happy faces of newlyweds. The juxtaposition caused imagination to take off. 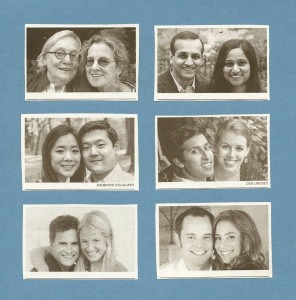 Newlyweds in The New York Times

This may seem a little odd, but every Sunday I enjoy looking at the wedding photographs in the “Vows” section. The black-and-white photos are like cameos, two heads usually leaning together smiling. Very simple. I study the faces looking for similarities, and I usually find them. To the right is a crude display that you can explore to see what I’m talking about.

The proportions of the features, the shape of noses, the style of teeth and smiles, and other facial details suggest the grounds for attraction. Sometimes a shared characteristic will even trump different ethnicity. Perhaps you will see that in the smiles of the couple in the middle of the right row. Often gay couples (top left) look so much alike that they could be siblings.

So one wonders if there is a mirror in play, a recognition of some aspect of self in the other. This would make sense in the case of couples who plan to have children. That was never on my mind, but maybe some couples factor in attractive physical features that they hope to replicate.

Sometimes I look at a photo and think, “This will never work. They don’t look enough alike.” That’s ridiculous, of course, but I really believe that there is something like recognition in play whenever people are attracted to each other. This may include recognition of a curriculum defined by convention. I have experienced that twice in marriage, and I certainly don’t regret the experience. Can’t speak for the gentlemen.

So what does this have to do with Biometrics? In general terms, the faceprint has mind-boggling potential. It might eliminate the need for keys, keypads, passwords, and maybe even a brain. All you would need to do is put your face in front of a screen and doors would open, phones would turn on, voicemail would become available, and data would manifest. This would be very useful for a variety of security purposes. If you wanted to volunteer in schools, your face would spare you the suspicion of being a pervert. And a terrorist couldn’t clear security at the airport with a fake passport.

Now let’s go to the potential of the faceprint in the matter of selecting a mate. For example, a facial recognition app has been created that could be used with Google Glasses, although Google has said it would not approve such (at least for now, one must assume). Say you are walking down the street wearing Google Glasses and see someone who attracts you. Your attention will instantly generate information about the person’s name, occupation, and Facebook profile. If it’s appealing, the pursuit may begin.

Identification particulars are just the tip of the iceberg, however.  How far can face reading go?  I mean can’t we deduce things about personality in faces? Don’t the mind, the disposition, and intelligence imprint in important ways? I guess so, since that’s the field of physiognomy. So could that knowledge be made available through biometerics?

If this capacity were developed, would people be interested in using it to assess the long-term viability of a relationship? I mean in addition to physical characteristics, pedigree, education, and profession, you could probably assess potential for fidelity, success, neatness, and addiction to sports channels. (You can tell this is from a feminine perspective.)

So why go through the personal growth thing resulting from dealing with the unexpected, the unintended? Through a faceprint, you might even avoid that first date that could lead to a troubled liaison. For example, a male’s readout might go like this: “The protruding brow bone is indicative of appetite–for food, drink, and sexual adventure. Watch him.  All the time.” And then for a woman: “That little bud of a mouth is indeed charming. However, it is of the shape that blooms full at menopause, emitting the fragrance of the Gardens of Hell.”

Ah, but perhaps there is such a thing as too much information and a too-present computer. With the threat of the faceprint looming, one thinks nostalgically about the good old days of blessed anonymity. How much longer will we be able to walk a woodland trail without worrying that someone approaching in high-tech spectacles is wearing the capacity to assess our very souls?

And really, where is romance going in this high-tech world? Shouldn’t we keep the comfort of our illusions? That willingness to take a big risk?

For myself, I like the idea of  those happy little couples venturing bravely out on the wilderness trail of commitment. When things get too certain, too safe, too secure, they can also get boring. Maybe it’s not in our best interest to be relieved of the possibility of a mistake or the chance to transcend an unanticipated challenge. And even when we know better, we sometimes commit.

The human psyche is, after all, an endless source of fascination whose complexity may be beyond the reach of even the most sophisticated computer. Let us hope so.