Did you know that St. George, the patron saint of Great Britain, was a Turk? And that he killed the dragon in Libya? Time for a little research.

I discovered that detail about Libya when I searched for the painting of St. George to include in my last post. Since I was writing about the effect of combat in the Middle East, I thought it would be fun to learn more about the saint’s connection to that part of the world. It turned out to be a fascinating exploration.

Aren’t we all familiar with that image of the warrior on horseback slaying the dragon? It is as though the story–and who knows how much if any of it is true–is one we need to believe. So here are some of the threads.

George was supposedly born in Turkey around 275 AD to Christian parents with Greek roots. He became an officer in the Roman army and the favorite tribune of Diocletian. When he was about 33, Diocletian created a crisis by ordering all of his solders to offer sacrifices to the Roman gods.

George refused even when Diocletian tried to bribe him with offers of land, money, and slaves. Diocletian ordered his execution, and George prepared for this by giving all of his wealth to the poor. He was tortured at great length, including on a wheel of swords, before he was finally decapitated in 303 AD.

So where does the dragon come into the story?

Crusaders apparently first heard a dragon story in the Middle East. Inspired by Pope Urban II, their goal over crusades that ran from 1096 AD to 1291 AD was to recapture the Holy Lands from the Muslims. The history of those campaigns, which included horrific attacks on Jews and Christians as well as Muslims, still informs tensions between the Middle East and the West.

If the fable originated in the Middle East, its structure evolved as follows in Europe: 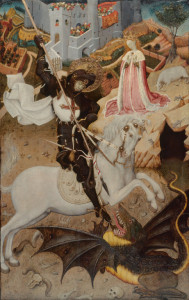 George is traveling through Libya when he comes upon a kingdom that  is being terrorized by a dragon. It has a fiery, poisonous breath that will destroy all life in the country. To appease it, the people feed it one sheep at a time, and when these are all gone, they feed him their children one at a time. Finally the only child left is the king’s beautiful daughter, and she bravely goes alone to meet her fate.

When George rides up to her on his magnificent white horse, she tells him the story of the dragon. Trembling with fear for his safety, she also tries to send him away. Instead, George pursues and attacks the dragon with his lance. The struggle is prolonged as George tries to find a vulnerable spot among the scales. Finally, he discovers an opening under a leg and kills the monster. The princess and the kingdom are saved, and she becomes his wife.

This is a very simple story, but has been embellished, probably by the Catholic Church, as follows:

In this version, George only wounds the dragon, and then he asks the princess to give him her girdle. He puts it around the dragon’s neck and leads the now docile monster into the town. The people are terrified, but George promises to save them if they will consent to become Christians. They do, and he slays the dragon as they watch and then baptizes 15,000 men–no women or children. On the site of the dragon’s death, a church is built, and from its altar a spring arises that cures all diseases.

There are many slightly different versions of the story that captured imaginations all over the world and became the popular subject of paintings and sculpture. In the background of some paintings, as in the one by Martorell in this post and by Raphael in my previous post, there is the figure of the princess. Some have interpreted her presence as symbolic of the Catholic Church.

George was canonized as a saint in 494 AD. He became the patron saint not only of Britain but also of Canada, Croatia, Portugal, Cyprus, Greece, Georgia, Serbia, Bulgaria, Romania, Bosnia, Herzegovina, and the Republic of Macedonia. He also became known as “the warrior saint” bearing a shield with a red cross on a white background, his name the battle cry of English knights.

My, how the story of St. George has traveled, and now let’s circle back to the beginning. A little village near Bethlehem called Beit Jala became known as the birthplace of St. George by many Christians. By Jews, it was known as the burial-place of the prophet Elias, Elijah in Islam. The shrine once was, and maybe still is, a place where Muslims also went to pray. Nearby is a monastery where the insane of all three religions were once incarcerated. There is much irony in this confluence of details, and I think I will leave it for all of us to ponder. 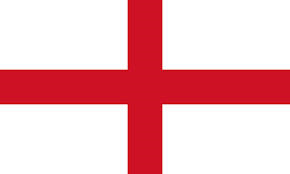 The Cross of St. George