The title of my last post was “Where To, Sapiens?” I have a response in mind. 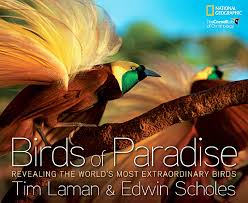 Anyway, this post was inspired by reviewing a beautiful book, Birds of Paradise, published by National Geographic. I turned to it because I really needed to get away from the news, if you know what I mean. This book provides respite through beautiful imagery of male birds-of-paradise vying for feminine approval–an approach that has ensured their survival. Hold that thought.

This book was created by two scientists, renowned wildlife photographer Tim Laman and ornithologist and videographer Ed Scholes. Tim, whom I met through a friend about two years ago, might be surprised by the turn this post takes, but it’s evidence of the ripple effect of a very important work.

It was Tim who initiated a partnership with Ed on a project that turned into an eight-year mission. Their ultimate goal was to capture camera and video images of all 39 birds-of-paradise known to live in New Guinea and northeastern Australia.

Their venture was extremely arduous. There was first and foremost just the physical challenge of exploring some of the most remote and uninhabited places on earth. All the while they were hauling around computers and very advanced cameras and video equipment, temporarily “nesting” in tiny spaces, including blinds and camps they constructed themselves. In one case, Tim built himself a perch 165 feet high in a tree. And then there was the need to patiently wait– hour after hour, day after day through heat, cold, humidity, pouring rain and the pitch-black hours before dawn–to capture a priceless moment. 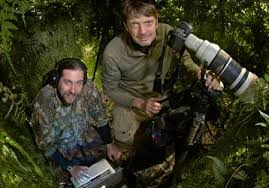 Tim and Ed go into humorous detail about this experience as they narrate a stunning National Geographic video about it. The pleasure and pride they have taken in their work is obvious, and they have done an enormous service not only in acquiring and sharing knowledge about the birds-of-paradise but also in thereby helping to ensure their survival. Three of the species are currently threatened with extinction and seven others are moving into the danger zone. The loss of habitat due to logging is the primary threat, but ecotourism may provide a critical economic alternative.

The stunning thing I learned through this book is how the female bird-of-paradise is “calling the species’ evolutionary shots,” so to speak. This was a possibility that conflicted with Charles Darwin’s concept of “survival of the fittest,” but he arrived at it when troubled by the extravagant plumage of the peacock. He concluded that there was such a thing as “propagation of the sexiest.”

But what does sexy mean? According to the authors, “Male birds-of-paradise aren’t picky, and more often than not any female will do.” It is the homely females that are picky, carefully studying males in search of the characteristics they find aesthetically pleasing. They also demand courtship displays that make it impossible for the male to take the female by force. When they decide to mate, the females pass all their preferences–and the characteristics they have dictated–on to their offspring.

The males have the luxury of plenty of time to focus on developing the required physical beauty and the courting choreography demanded by females. This is because they have no domestic responsibilities whatever, as in building nests, hatching eggs, or feeding chicks. They are also not threatened by predators, don’t have to compete with squirrels for seeds and nuts, and can feed upon a wide variety of fruits. 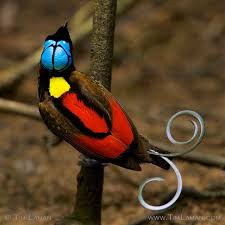 The species have been divided into two general categories. One is called the “color shakers.” Their feathers are every color and shape imaginable; the legs and feet often as though covered with red, yellow, blue, and purple tights; and the eyes and even the insides of the mouths of different colors. The plumage is splendidly beautiful but in some cases a little awkward to manage. 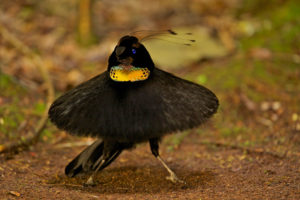 The second category, called “the shapeshifters,” seems to have developed because some females preferred a primarily black body. The male manipulates it to create magical, mutating moments during his mating performance.

It can take a male as long as six years to perfect his costume and his display. Some practice in an open space groomed daily, and it may include a horizontal limb above so females can watch the activity. In other cases, males may perform like gymnasts in a tree or do something like a “pole dance” on an upright branch.

Some of the videos capture the male subtly panting at the end of his solo. There are also moments when a female apparently goes “Hmph” and flies off, leaving the male in a dejected state. If she is impressed enough to mate, she signals this by gently fluttering her wings, leaning forward and cocking her tail slightly. The actual act only takes a few seconds. 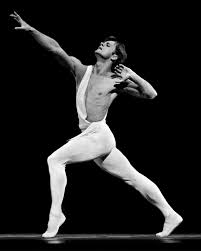 Tim and Ed repeatedly use ballet terms to describe the presentation of the male birds, and this seems very apt when you think of the elaborate costumes and choreography in ballets. Male dancers so often embody the “prince,” partnering a ballerina in the most courtly, complimentary way imaginable. However, a male principal often returns alone to command the stage with a bravura performance, beautifully sculpted musculature vividly displayed. An image of Mikhail Baryshnikov comes to mind, and one can metaphorically imagine audience tail feathers fluttering in invitation.

As I was working on this post, an interesting coincidence revealed that the story of the bird-of-paradise is ongoing. I discovered this in a little paragraph in the October National Geographic. This was about the fact that Ed (who now runs Cornell’s Birds-of-Paradise Project) and Tim last year confirmed yet another species of birds-of-paradise, which must bring the total to 40. This is the Vogelkop superb bird-of-paradise, which looks very much like the simple superb bird-of-paradise but is genetically distinct. You can see a  wonderful video of the two here.

One of the most challenging things about the research Tim Laman and Ed Scholes did was to capture the perspective of the female as the male danced and sang and displayed to win her favor. What, exactly, does she look for?

That makes one wonder: What if the human feminine, Femina sapiens let us say, awakened to the idea that our mating preferences could shape the evolution of our species? Which characteristics would we choose to preserve and cultivate? Physical beauty would undoubtedly be important, but what other features might establish the polygyny (the right to mate with as many females as possible) that male birds-of-paradise enjoy?

(Notice how I framed this to be attractive to the male? I am really smart.)

Anyway, a very interesting idea. It just goes to show how great a thing a walk in nature can be when you’re stressed out–even if it is through a book. It is also humbling to realize how much wisdom is accessible there, even in a little bird brain.

2 Responses to “Survival of the Sexiest”