“Yes,” was the answer, “since you’re going to write about this tomorrow.” Ah, that tempering subconscious had awakened me again.

I had come home depressed and edgy from a documentary called “True Wolf,” which I had seen at The Screen. At the very beginning, an old film is shown of what looks like a firing squad of men in black, mowing down a lone black wolf in a snowy landscape. Much of the remaining hour or so was blighted by the impact of that image.

The movie was about the life two Montana wildlife activists, Pat and Bruce, had devoted to a gray wolf named Koani. They had met Koani as a nursing pup destined to appear in another documentary. At the end of the project, the question was whether to have the young wolf euthanized or try to raise it, and they chose the latter, very difficult path. Koani lived with them for 16 years and traveled the country in educational programs dedicated to dispelling myths about the wolf and revealing its true nature.

Because wolves are never alone in a pack, Pat and Bruce finally had to get Koani a dog buddy to curb overwhelming anxiety if someone wasn’t with him every minute. They walked him on a long lead in beautiful landscapes two hours twice every day, fed him fresh meat from the butcher shop, built a tunnel to their home to give him easy access to the house from his kennel, and made every effort to socialize him with dogs and other people.

What stayed with me, however, was the image of Koani’s light eyes staring uneasily  at the camera from a lowered head. When he was filmed on walks, every sense seemed alert, the rangy body tense and ready to bolt at any opportunity. He clearly became steadily more comfortable with people and dogs, but there was never a recorded moment–except when he slept–that he seemed truly at peace.

Pat and Bruce are interviewed throughout to create the story, and their concern about whether they did right by this creature they clearly loved is obvious. It’s hard to know the right thing. Pat commented that wolves are not comfortable being touched, and yet there was view after view of her tussling way of expressing affection. 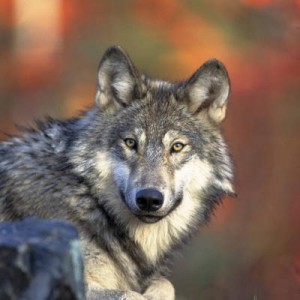 Throughout the documentary there are views of handsome wolf packs in the wild and recordings of their beautiful, eerie call. Bruce states that no one is ever the same after looking a wild wolf in the eye, and the camera captures the visage of a gray wolf that makes that point. One wonders what it is about the cast of the head, the color of the eyes, and the steadiness of the gaze that seems to address the soul. And there is so much in the documentary, including the faces of raging ranchers and demonizing Christians, that makes the expression of the wolf seem noble by comparison.

Wolves don’t live long in the wild, and it could be said that Koani dedicated many times the normal life span in service to his species. He was euthanized at the end of it, and Pat and Bruce carried him to a level place up in the mountains and left his body to deteriorate there naturally. Their intent was to set him free at last, but they installed a time lapse camera to record the steady deterioration of his carcass. At the very end, green spring growth is coming up among the white bones.

I don’t know what to think about this conclusion. Maybe it is what I feel about it that is important.

One Response to “Take on “True Wolf””