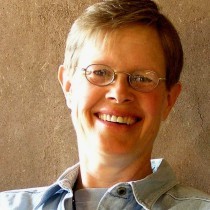 For about 16 years now, I’ve been regularly making the 80-mile drive south from Santa Fe to visit sister Kate in her country place. Only recently did I begin to register a warning in the vast and rugged landscape. And Ann Adams, a long-time friend and neighbor of Kate’s, confirmed the warning with the quote above.

Ann is the Education Director for Holistic Management International where she has worked for 25 years. Inspired by Zimbabwean ecologist Allan Savory, the organization is dedicated to promoting regenerative agriculture worldwide. What a great way to help restore land defaced by our human footprint. 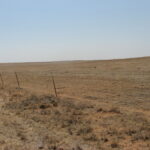 And that footprint was in part what I was seeing on my long drive through largely deserted open land. Like all of the Southwest, New Mexico is in deep drought, no relief in sight. The gradual onset several years ago is now moving into the severe mode. There are very few cattle on the range, and plants are steadily vanishing. Here and there are large expanses that have been grazed down to the dirt. 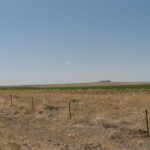 But there are breaks in the brown, so to speak, in acreage of hay and corn that is a vivid green from irrigating. That seemed unnatural to me, untenable long-range like the few cattle surviving on provided hay and water. So I asked to meet with Ann. “What’s going on?” was the fundamental question. But the one she deals with daily is broader than that: “How do we get an eco-literate culture?”

We met in the morning in a shaded seated area outside the off-the-grid home she had built. And she taught me in part by pointing moment after moment at the ground with its weeds, flowers, and bare spots but also at the hidden world beneath. It is a very dynamic world, of roots going down to twelve feet and of microbes fed by the carbon pulled from the sky by the plants.

Ann explained that the carbon serves as a sponge that will absorb and store any rain that falls. In fact, she said that if there are living plants or plant litter to cool the soil, the carbon in it can store 20,000 gallons of water in an acre of land blessed by 1″ of rain. And then there are the leaves of the plants that serve like solar panels so that they can cycle energy in the ground as well as minerals.

Of course, if cattle overgraze, the bare ground interferes with this dynamic. Cattle do help by giving the earth a “deep massage” as Ann put it. They till the soil in a beneficial way, as long as they travel. Ann pointed to the way the great buffalo herds created a rich landscape, but this was due in part to predatory animals and Native Americans who kept them moving.

Ann made it very clear how soil, plants, and animals need each other, and so do we. However, I had no idea how important the soil is relative to carbon capture, nor did I realize the degree to which carbon dioxide has increased on the planet. The National Oceanic and Atmospheric Administration (NOAA) reports that levels are higher than at any point in at least the past 800,000 years. This clearly relates to climate change, and the fact that 2/3 of the world is covered by grasslands makes their maintenance especially important.

The farmers and ranchers following the guidelines provided by Holistic Management International have discovered multiple benefits. For example, they have achieved an increase of:

Further, on the Holistic Management International site, the 15-minute slide show (Ann’s voice) provides some before-and-after images like the one below that vividly illustrate the value of their regenerative approach to agriculture. 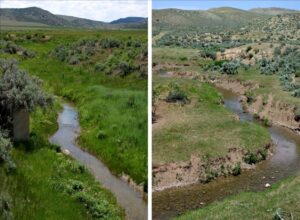 However, there is the status quo to deal with. Large landholding corporations and individuals are known to do a minimal amount of agriculture to qualify for a property tax that is only 1/10th of the usual. And then there are subsidies to promote the raising of corn to feed beef rather than let them graze on open land, and the synthetic fertilizers and pesticides applied damage the soil. At the same time, thousands of acres of open land are being lost every year to development.

I’m not involved in regenerative agriculture, but I hope the approach will travel ever more widely. And as I drove home after interviewing Ann for this post, I was sure we would be dealing with “not soon enough.” As the desolate landscape flew by, I realized how inadequate some nice rain would be to bring the huge acreage back to health. A very old ruin of a frame home on the way seemed to confirm that bleak outlook. 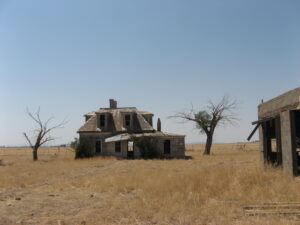 Long ago, I was told that the house was a Craftsman model, something you could buy from Sears and ship by train. I’ve long wondered why the owners don’t just tear it down, clean up the property, and maybe build something new.

Every time I make that trip, I expect to see the old barn next to the house flattened. For a time there was a young elm tree that helped hold it up, but then it snapped. I’ve had a fantasy about getting a big sledge hammer and going there some night and knocking down the one visible beam sustaining the roof. To get things moving, you know. 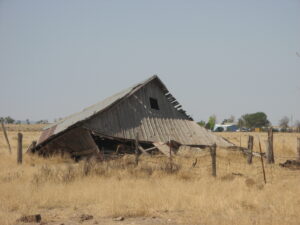 Ann has said that our troubled agricultural sector can endure for only 30 more harvests without radical change. It’s time to level the barn of old thinking and start over. One wonders how far down the road it will be before we all see that truth.

So what do we do In the meantime? Ann says we can help by eating organic, grass-fed/pasture meats and dairy products and buying local agricultural products grown with a focus on healthy soil. I’m on it.