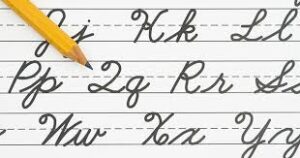 I am devastated. I just discovered that I/we are going extinct. I mean those of us who write by hand.

This realization came fast upon the heels of inspiration for this post–to encourage readers to begin keeping a journal to track developments in this very historic moment. I even imagined readers willing their journals to descendants who are already manifesting qualities that could serve to advance human evolution rather than curtail it. I do have a tendency to get carried away.

And then suddenly I realized that the ability to write in cursive, the fundamental skill necessary for keeping a journal, is disappearing.

I haven’t given up on promoting such a practice, but I would like to begin here by sharing some of its history.

THE LIFE CYCLE OF CURSIVE

I think almost everyone reading this probably took writing classes in elementary school and were handy with it, pardon the pun, before 2010. That was the year when national learning standards were established via Common Core. It no longer required elementary school students to learn cursive, the style so much faster than printing each letter by hand.

Of course as typewriters and word processors began to change the educational scene, the importance of learning cursive ebbed. In fact, according to The History Channel, the Saturday Evening Post had by 1955 dubbed the United States a “nation of scrawlers.”

However, I exaggerated a bit with my opening statement in saying that those of us who write by hand are going extinct. After all, 21 states have now acted independently to require training in cursive. As of the moment, this includes Alabama, Arizona, Arkansas, Delaware, Florida, Georgia, Illinois, Indiana, Kentucky, Louisiana, Maryland, Massachusetts, Mississippi, North Carolina, Ohio, Oklahoma, South Carolina, Tennessee, Texas, Virginia, and West Virginia. California is allowing districts to make their own decisions in this regard.

I find this reassuring. I recall a moment several years ago when a friend told me about getting a call from a grandchild who had just graduated from high school with honors. My friend had sent her a handwritten note commending her on her achievement. The granddaughter had called to ask her what she had said. She couldn’t read cursive.

For those shocked by the evidence of a certain ignorance rising among the educated, I will detour to the book that inspired me to begin keeping a journal decades ago.

A PATH TO CREATIVITY

Creative inspiration would be a wonderful refuge in this troubled time, and The Artist’s Way by Julia Cameron, which I acquired in 1992, is a great resource for awakening it. 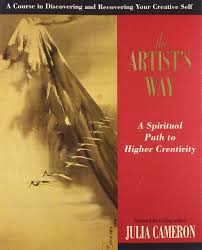 For two decades Cameron had worked in Hollywood as a film and television writer, director, and producer of independent features and documentaries. Later she developed classes to unblock creativity in a workshop on screenwriting and fiction, and that experience ultimately led to the writing of this book.

Cameron learned that a foundational requirement for any creative awakening was the writing of “the morning pages”–three pages first thing every morning. Although Cameron did not mention this, the writing would be cursive, of course, and mostly stream-of-conscious, just whatever comes to mind. “Nothing is too petty, too silly, too stupid, or too weird to be included,” Cameron wrote. She promised that it would ultimately lead to making contact with an inner power and “a strong and clear sense of self.”

The course was 12 weeks long, enriched by helpful tasks to choose among. For example, one was to make two lists.  One was the names of five people you admire. The other was the names of five people you secretly admire. Very thought provoking. I found the whole three-month experience wonderful. It was assumed that one might continue with the daily morning pages; and I have, with occasional intermissions, to great personal benefit.

When I suddenly realized that cursive is disappearing in our culture, I was afraid that this would compromise the potential in keeping a journal. And I also began to wonder about the ripple effect.

I am not well informed about the way early education has evolved in America because I’m not in close touch with little children. I had no idea that they are now becoming keyboard proficient in the earliest grades. And even though 21 states are continuing to require the teaching of cursive in elementary school, long-range there may be a significant communication problem if eventually more than half the people in a generation here can’t read it. 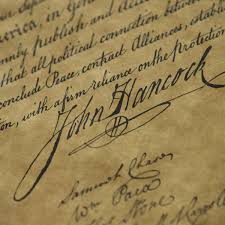 I think of trivial problems, like greeting card sales declining if people can’t write on them. And what about sales of pencils and ink pens? Will they go into steep decline also? Will there continue to be such a thing as signatures?

It gives me the creeps to think the day may be coming when a young person will look at the signature at the left and ask, “What does it say? And what does that mess all around it say?” 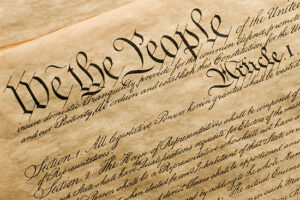 The same for the Constitution, whose script, as beautiful as it is, will be as legible as Egyptian hieroglyphics.

A special thing about handwriting is that it is individualistic. I remember fretting at the instruction to slant a certain degree and defied it as soon as I could.

And I take note of other people’s handwriting. There really is a lot of scrawling going on, an indifference to the aesthetics of beautiful penmanship, and you can read a little personality in it.

Of course electronic print erases all those considerations. But perhaps I’m not the only one who is irritated at times by intrusive “corrections.” They may be about spacing or punctuation or grammar, and I feel like saying, “Buzz off. I know how to do this.” But perhaps the tech takeover will become so aggressive that grammar and punctuation will no longer need to be studied. Will the less taxed brain begin to shrink? Are we seeing that already?

Just kidding. While exploring this topic, I discovered several references to research revealing that when one is working with cursive, the brain is stimulated in multiple places that aren’t affected by keyboard activity.

Apparently, cursive began to manifest among the Romans in about 500 A.D., and they used quill and reed pens with ink. It’s amazing that some of the greatest literature in all of human history ensued. Perhaps there is a certain benefit to consciousness when the mechanics of writing by hand take more time.

The process began to speed up when the first commercial typewriter appeared in 1873. In our new computerized world, writing is so much easier. Is the content better?

I learned all of these details just due to the idea of how valuable keeping a journal during this historic time could be. There is a lot of pressure now on many fronts to “go along to get along.” However, we might do a great service by retiring with our journals to consider certain trends and ask, “Is this good? Or do we need to rethink?” Of course, our conclusions will travel in conversation–and no telling how far. Independent thinking could ultimately be priceless.

And those of us who learned cursive from the beginning can simply continue to nurture it in our unique style of longhand. It will no doubt be noticed, and here and there among the younger folks, the idea of sustaining it may catch on. And as my previous post suggested, the subtle ripple effect of a good idea may eventually change the world.

5 Responses to “The Accursed Cursive”