Her wings are clipped, and it is found deplorable that she cannot fly.

My last blog on the concept of the Other ended on the note that Hillary Clinton’s role as Other in the White House could be even more harrowing than it has been for Barack Obama . . .unless. This blog will be about that conditional. 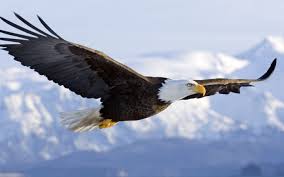 A Female Eagle in Flight

I must say at the outset that I have been ambivalent about Hillary’s potential run for office. I greatly respect her but don’t find her an endearing personality. In addition, I am suffering a bit from “Clinton fatigue” and am a little concerned about her. There are already indications of how brutal the campaign will be; and after all she has been through, I wonder why she would want to risk even worse. She may be intent on making the sacrifice, however, because there is no one else to lead as she will. After all, she is a woman.

From a feminine perspective, there is no potential candidate in the country, nor has there ever been in history, with a comparable and relevant level of knowledge and experience. She also “stood by her man” through every difficulty, for those who consider this a defining value.

However, through a couple of clips that showed up on the Internet last week, the attack strategy has been revealed. The forces of opposition will sic the women on her. They are betting that we will cannibalize our own. Now the “unless” thing comes up, and the source is Simone de Beauvoir, author of The Second Sex.

I have not read this book, just studied research on Beauvoir in the Stanford Encyclopedia of Philosophy. Published in 1949, The Second Sex analyzed the way that patriarchy has thwarted the full development of innate feminine potential. The perspective is historical and philosophical rather than feminist. In fact, Beauvoir, who was born in 1908, did not embrace the second wave of feminism until about 1970.

According to the Encyclopedia, Beauvoir made it clear that the liberation of women is our own work and does not involve appealing to men to change. Instead, it is “a matter of women discovering their solidarity.”

This is impossible for women many places in the world because they are struggling simply to survive. Even among privileged women, there is the ongoing temptation to submit to the authority of others and thus remain children, as Beauvoir put it. However, there is no place in the world where women have a greater opportunity to step up and do this work than right here, right now.

The challenge is to move actively toward bringing our unique values, skills, and perspective into absolute parity. At a time when male-dominated democracy is failing effectively to address the most critical issues of our time, it is especially urgent that we become involved in the highest levels of government. But how could the necessary feminine solidarity that Beauvoir wrote about happen?

For one thing, perhaps we need to know more about our gifts. James R. Flynn, the professor of political studies at a New Zealand university who has become famous for decades of study of the human IQ, has asserted that the sexes are “dead equal” on cognitive factors pertaining to the use of logic on abstract problems. In addition, there are findings elsewhere that the IQ of women is developing faster than that of men due to the benefits of education, professional opportunity, and multitasking with home responsibilities.

If we are dead equal and rising in cognitive ability, consider what a loss our disadvantaged status has been to the story of humanity. Consider also what a loss the rarity of equal and creative partnerships with men has been to civilization. Simone de Beauvoir, for example, had a lifelong, “open” relationship with Jean-Paul Sartre, another intellectual giant of the era, and it seems that the foundation of their devotion to one another was the way their ongoing dialog enriched each other’s works.

Women have certainly made progress toward equality in this country, but we are at a critical juncture due not only to the urgency of issues afoot but also to an unprecedented opportunity. If  Hillary runs, we have through her leadership and our support of her leadership an opportunity to show what women can do, given a chance. We don’t have to resonate with her personally, we don’t have to agree with everything she says, but we can show her respect and support her emotionally. What we have to “get” now, however, is that a vote for her is a vote for the feminine itself. Everything is about timing; and love her or not, through Hillary our time may finally have come.

And look at it this way. This is also an opportunity to restore civility to public discourse. That could come about in private moments with our men when we deliver a new message: “You can disagree with Hillary intellectually any time you want, but if you ever abuse her just because she’s a woman, I’m going to have your ass.”

2 Responses to “The Age of Hillary”