My last post was about change and one way it can begin. A certain barn outside of Estancia, New Mexico, represents another way—actually two other ways.

Estancia is a town of about 600 people southeast of Albuquerque. I have become familiar with the little community because I drive through it every time I go to visit my sister, who lives about 12 miles west of town. As I head toward her place on highway 55, I pass by a striking property on the left. The centerpiece is an abandoned old frame home that looks like the classic haunted house. It is kept company by dead and dying elms whose spidery limbs reach pitifully skyward. A few yards to the west is a big old barn. 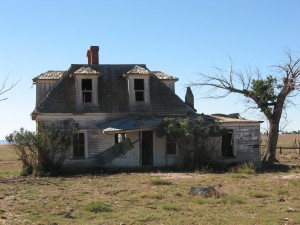 Friends who live in the area, one of whom is an architect, believe that the house is a Craftsman home that was probably bought from Sears Roebuck and shipped as a kit by railroad. Sears started advertising kit homes in 1916, so the house may be approaching 100 years old. Asked by the representatives of the estate if it could be rebuilt, my friend said it was too costly and recommended that it be burned down for practice by fire personnel. Concerns about a potential health hazard from smoke and asbestos have so far stymied that possibility.

The home has attracted the attention of many artists and photographers, but it is the barn that intrigues me. About three years ago I thought that its collapse was imminent, that only a frail young elm tree was holding up the entire structure by its sagging roof. I kept watching and saw the leaves on the elm die and the trunk buckle, but still the barn remained standing. The deterioration is steady, the wooden walls rotting and boards falling in, sheets of the tin roof separating and lifting, the eaves on one side dropping all the way to the ground.

I wonder how many other people are watching it, wondering when and how it will come down. Ancient and useless, it is nevertheless dynamic due to the ongoing tension manifest in remaining precariously upright.

It has become for me a symbol of change that will happen when the old and outworn is cleared away. However, perhaps this requires a plan. If my friend had on his drawing board a design for a wonderful new home on that property, maybe his very imagination would begin to release the barn from its upright obligation.

If it isn’t critically buffeted by such creative energy, what will the tipping point be? I wish my mind could be installed as a sensing device so that I could observe the moment of the inevitable. Where is the structure most vulnerable? Will a heavy rain or snow spell catastrophe? Will a high wind buckle the crucial wall? How about something more subtle–an iron nail rusting all the way through at a critical joint, a mouse digging a hole under a center beam, one crow too many landing on an eave, a bee colliding with a spider web that binds an angle? Who knows how delicate the balance is. 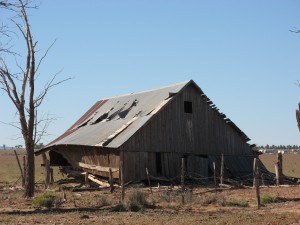 Or maybe there is someone in the town who finds the barn a constant reminder of a tenacious obstacle in his own life. Perhaps he knows about construction and over many sleepless nights has identified the critical post that will yield with one blow of his sledgehammer. Let us imagine that one moonlit night he heads out with his tool, thinking, “Why not? We all know it’s going to happen.”

When he gathers with others the next morning to view the rubble, a gentle breeze explores the unfamiliar shape and sun flashes on the twisted tin. The quiet within the small group is respectful, thoughtful. They glance at the haunted house, more exposed than ever. Something has begun.

A very eloquent and unsettling old building that barn is. And maybe it’s a lot tougher, a lot more resistant to change, than I could ever imagine. I’m watching.

One Response to “The Barn Choice”