I haven’t retreated one iota on the issue of gun control. However, I have begun to feel sad about the good men who may feel blamed for and threatened by the killings in Connecticut. I thought I would take a moment to think about the things I love about men in general.

I think first of my brother, a veterinarian in Texas. He is also a great sportsman and has a big collection of guns secured in steel cabinets. He walks a little stiffly these days, all the injuries from football, polo, hunting and fishing accidents, and belligerent horses and cattle beginning to take a toll. He is one of the most colorful and complex characters I have ever known, and probably the most wonderful memories of his life have to do with sometimes hilarious and dangerous adventures hunting with friends and family. I get the idea of the masculine camaraderie but the dangers, the hardships, and the killing are beyond me—probably beyond a lot of women.

Biggy (the nickname by which his sisters know him) is a person of contrasts. I remember him working with needle and thread to learn to suture at the kitchen table, and one day he helped me with some crochet. I was creating a flowered spread and made a mistake, and he volunteered to unravel the mess, which he did with great delicacy and patience. I’ve watched him work many times and have always been struck by his sensitivity and kindness with creatures. 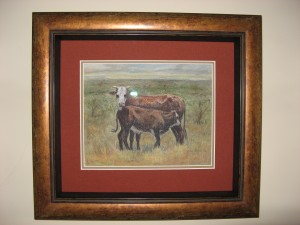 We haven’t talked about this gun issue, and I’m sure it is freighted for him with the prospect of a way of life coming to an end. At the same time, something new is beginning as he turns to developing great artistic talent that has lain pretty dormant all these years. Change can be good too.

Biggy represents masculine qualities that I treasure, and I see different ones in others every day. When I go by roadwork or pass by a building under construction, I often marvel at how good men are at design, engineering, building, and whirling around on earth movers as though they were tricycles. It doesn’t interest me and I don’t know how they do it, but I’m grateful that they do.

The other day I drove by a home under construction in my neighborhood, and I saw the builder who wears a cowboy hat. He was leaning forward, hands on his hips, dressing down the foreman who no doubt needed it. Just getting the job done. I’ve never dressed down anyone in my life. I wish I had what it takes.

And I remember the pale, dangerous eyes of a young, former husband as he confronted a table full of insurance adjusters. “Oh yes you will, in fact, fully compensate us for this water damage” was the message, and they did. He went on to become famous for the turnaround of what was then the biggest corporate fraud in history. I have no idea how you do a thing like that, and I admire it greatly.

Not too long ago, I happened to catch a clip of a champion polo player on TV, and I was absolutely riveted by the beauty of an intensely competitive nature combined with incredible horsemanship. At the end of the game, the player met briefly with the camera crew. He was tired, but as he spoke, I also thought, “Oh, dear. He may not be very smart.” This has always been my foremost requirement in a man to be admired, but I found the game on YouTube anyway and watched it over and over.

I guess my western roots are showing, but I saw three times that documentary “Buck” about the horse-whisperer Buck Brannaman. He “breaks” horses with kindness and respect and teaches others to do the same. At the end of the documentary, there is a beautiful scene of him putting a horse through its paces in a green pasture. As I walked out of the theater with my sister, Kate, I turned to her and asked, “Are we in love yet?”

And I see a stunning side of the masculine at Carl and Sandra’s Gym where I work out. Stunning and puzzling. I find it hard to comprehend some of the things these athletes love to do, like the one who has recently completed a 100-mile marathon; another who cycled through mud up the last mile of a six-day, 30,000 foot ascent; and another big dude who continually hones his ability to lift 400+ pounds. Doesn’t this involve suffering? Why do they enjoy suffering?

These guys and others like them are not vanity-driven body-builders. You would probably never guess their capacity from seeing them in street clothes. What especially touches me is the way they have channeled what I think of as the classic warrior energy into the service of self-mastery. They may not have articulated this to themselves, but I think they are cultivating power held in reserve, inner resources to be accessed only in the moment of need. I can’t say that I understand it, but it impresses me.

And the question for men now must be what to do with that masculine drive in a world that is changing so fast, in a country where the needs of the collective for peace and security seem to be challenging traditional male privileges and prerogatives. The frontier is gone. We don’t need to kill what we eat anymore. Climate change is destroying the habitat of wild game, and development is encroaching on the landscapes where hunting has always been done. People who are not hunters have acquired the weaponry of war as though it were some kind of toy, and war itself has become potentially so deadly that humanity will soon no longer be able to risk it.

“I’m sorry,” I feel like saying to my brother and others like him. “I’m sorry that the world has changed so much that you may have to change too.”

And in conclusion, I don’t think men really know what women love most in them, and perhaps it is time for other women to share this as well. In my own trail of memories, it is their fierceness and strength in time of need; the ways in which they sometimes temper strength with kindness; their gifts in creating, building, and managing; and their tremendous capacity for self-discipline in athletic endeavor. At least that’s part of what I love in them.

So there. My moment of appreciation. Wonderful as men are, however, they are not my/our superiors. And they’re going to have to start listening to us because some of us are very, very smart and have important things to say.