Are humans heading toward our own version of colony collapse disorder?

I’m tired of writing about sexuality—the birds and bees, you know—and today I’ll just  focus on bees. It looks as though we may be moving toward a bee crisis.

As you may remember, the first news of the bee die-off referred to as “colony collapse disorder” came out in 2005. Unusual numbers of bees began to die over the winter, and there were stories about them simply disappearing from their hives, as though their navigation system had failed.

No research has been able to define a specific cause, and there are probably many factors, including mites, viruses, chemicals, odd weather, and stress. Hives by the thousands are trucked all over the country to pollinate vast acreages of crops. If I were a bee, I would find that very stressful.

As the bees work, they are exposed to the many chemicals that support industrialized agriculture. In fact, about 150 different residues have been documented in pollen and wax. The substances of greatest concern now are the neonicotinoids, whose use has soared at the same time colony collapse disorder was advancing.

The losses this year are the worst recorded. In fact, the biggest beekeeper in theUnited States, the Adee Honey Farms of South Dakota, had lost 55 percent of its bees by this spring. Similar experiences with die-off are reported by other bee keepers all over the country. There is no suggestion whatsoever that the problem might suddenly disappear.

The United Nations Food and Agriculture Organization estimates that bees pollinate 71 of the 100 crops that provide 90 percent of the world’s food. Forget global warming and pollution. How about this for a really big problem?

Bee die-off is happening worldwide and is currently high profile in Europe. The European Union recently failed to place restrictions on the use of neonicotinoids until their role among faltering bees could be determined. As in the United States, the position of biochemical producers is that they fully support more research, but sales should not be restricted until there is proof of damage. Of course they’re not going to do that research.

It is so odd to watch these crises building on so many fronts and to observe the failure of the powers that be to address them effectively. This “What’s it going to take?” question hovers over so many unresolved issues.

One day this weekend I sliced into an orange. It was beautiful on the outside, but the interior was the oddest thing I have ever seen. It was like the orange was stuffed with tissue paper that was both dry and tasteless. It was not organic. Conventional production gone awry?

That kind of moment makes you realize that we, like the bees, are exposed to countless chemical unknowns in all this beautiful, conventionally grown produce we consume with less and less pleasure. Organic produce is becoming steadily more attractive, but even if we have to pay a little more, slice off flaws, and dig out a bug or two, we would be better off eating  it.

In response to complaints by a coalition of environmentalists, consumers, and beekeepers, the EPA is now taking another look at the neonicotinoids it has approved. The question arises, however: How long does it take to really know the full effect of all the agricultural chemicals that so permeate our lives? Like the bees, are humans heading toward our own version of colony collapse disorder? 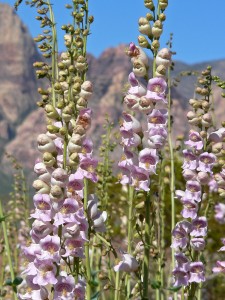 Let us hope the EPA has adequate funding to do this research. But if it does find reason to prohibit the use of the neonicotinoids, the cry will go out: “More interference by Big Government!”

Well, we all have a tiny bit of Planet Earth to care for, so I guess the comfort of the moment is to do the best we can with that. There is this very sturdy weed, Palmer’s Penstemon, that grows in the desert environment around my home, and I have noticed that it is very attractive to wild bees. Instead of pulling them up this summer, I plan to protect and water them a bit, even give them a bit of “worm juice” from my bin to help them thrive.

And at the nursery, I’ll see if I can find some plants that are drought tolerant and attract both bees and butterflies. It may be time for all of us to do what we can.

One Response to “The Bee Crisis”