I’ve written respectfully about astrology. Now let’s consider the possibility that it is a “fad”–just like economics.

This is the perspective of Nassim Nicholas Taleb. A Lebanese American scholar and essayist who is devoted to the study of randomness, probability, and uncertainty, he was recently described by a journalist as “the hottest thinker in the world.” On reading his book, The Black Swan, I can understand why. The world will never look the same to me.

Actually, I am exaggerating a bit. I skimmed here and there, numbed out occasionally by Taleb’s intelligence and erudition and the relentless proof thereof. I am really grateful that he used some simple bird metaphors to illustrate his complex points.

Taleb has issues with humanity’s tendency to mine history in search of patterns that will enable us to predict and plan for the future. This is impossible, he asserts, because we edit history to insert cause when the world’s most momentous events could not have been anticipated. These powerful, improbable events are what he calls “Black Swans.” 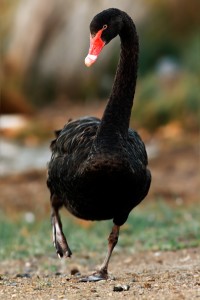 As in nature, the Black Swan is extremely rare and utterly random. Only in retrospect can we follow the trail to the nest where the egg hatched. Examples in modern history include the rise of Hitler, the spread of the Internet, the market crash of 1987, and the terrorist attack on the Twin Towers in 2001.

To drive home his message about our misguided focus on history, Taleb also uses turkey metaphor. Readers are to envision ourselves as turkeys in a turkey farm, fed generously and daily by friendly humans. Yesterday, the day before, and so on represent history that would convince the turkey mind that the pattern of the past will predict the reality of the future. Then comes Thanksgiving and the Black Swan experience.

As if that metaphor were not pointed enough, Taleb goes on to make a connection between pattern-seeking and a high concentration of the chemical dopamine in the brain. (Maybe that’s where the slur “dope” comes from.) He says that such concentrations are apparent in people who attend to fads like astrology, superstitions, tarot-card reading, and economics. I feel chastened. I wonder if the Nobel Prize Committee does too.

I am having a little fun, but Taleb really is brilliant. On top of being a scholar, he has also been a hedge fund manager and a trader, and he has made a tremendous amount of money from applying his theory of randomness to the market.  Some of his advice is paraphrased as follows:

– Avoid dependence on large-scale, harmful predictions. Those experts with the biggest reputations, as in economists, are the worst predictors.

– Invest in preparedness, not prediction.

– Unless we know what new technology will be invented, it is impossible to predict the future.

– Trust in cause only when it has been verified by experiment.

– Read history, but don’t reverse engineer to establish cause.

– Insulate yourself from the toxicity of the world by shutting down the television set and minimizing time spent with the newspaper. Train your own reasoning system to control your decisions.

Even though one does sense in Taleb frustration with inferior minds, he also occasionally communicates in ways that are reassuring. After all, Black Swans are not innately evil, and he gives examples of ways in which their appearance has been a great boon to humanity. For example, the discovery of penicillin was an accident, laser surgery evolved from an experiment in splitting light beams, and Viagra was meant to be a hypertension drug. Those too are examples of Black Swans, especially that last one.

Taleb also suggests that we pause and take a look at all the Black Swans in our own lives. These can include not only unforeseen disasters but also experiences of extraordinary good luck and synchronicity that have led to love, opportunity, fame, or some kind of breakthrough.

When we look back at the good Black Swans, we say, “Never in a million years would I have expected that . . .” In the case of the bad ones, the comment might be, “There was nothing in the world I could have done to avoid this.” No matter what we do, the random will still have its day.

As I approached the end of Taleb’s book, I wished that there had been some reference to the severe consequences that have been predicted about climate change. I learned elsewhere that he is definitely “green” but avoids this discussion. After all, a Black Swan must by definition “sucker” the public,  as he puts it, and we have been warned.

Nevertheless Nassim Taleb does anticipate another Black Swan: “I know that history is going to be dominated by an improbable event,” he says. “I just don’t know what that event will be.” And neither does anyone else, he would add. I wonder how soon we will know that a new Black Swan has landed.