Spit into a glass of water the first thing in the morning. If the saliva looks like white threads, that’s Candida.

As I wrote in my previous post, after my mother’s death from breast cancer I decided that I would do whatever it took to avoid this disease. That determination seemed to evoke two supporting coincidences.

In the one case, I joined the National Cancer Institute’s Breast Cancer Prevention Trial, which was launched in 1992 a few months after my mother died. The purpose was to test the effectiveness of tamoxifen as a preventive therapy. Often called an “anti-estrogen,” the drug was designed to prevent cancers that test positive for estrogen receptors.

At about the same time, I met Jane Remington, who became a great friend and encouraged me to meet a naturopath named Sylvia Flesner. Jane had experienced a remarkable healing by Sylvia after becoming extremely ill following several courses of antibiotics associated with gum surgeries. The antibiotics had caused a severe infection of the yeast called Candida albicans. Sylvia believes that such infections are the place of cause in a raft of disorders, including cancer. It was explained to me as follows: 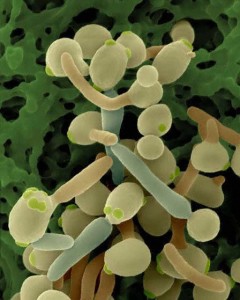 Candida albicans is basically the microorganism that consumes our bodies once we die. Due to our modern lifestyle, which began to incorporate large amounts of antibiotics steroids, hormones, and birth control pills after World War II, the yeast has been enormously stimulated. It normally lives in balance with other microorganisms in the gastrointestinal, respiratory, and female genital tracts. In overgrowth, however, it has begun to move into blood and lymph and travel to the organs, impairing the immune system and creating havoc wherever it concentrates.

Having always been very open to the unusual, I didn’t blink when Jane told me that Sylvia was clairvoyant and would know exactly what I needed to fortify my own system.  At first meeting, Sylvia told me that cancer cells were already beginning to multiply in my body–perhaps I suspected this–and recommended a severe diet and supplements to “clean up.”

As I said, the diet is severe and eliminates all the food in modern life that causes the yeast to flourish. I could not have any sugar, dairy products, yeast, caffeine, alcohol, or anything fermented, and processed foods were to be avoided. Fortified by supplements, I was to eat this way for three months, drinking eight glasses of hot lemon water per day to help cleanse my system.

Not everyone would want to do this, and it takes a lot of character. Having observed my mother’s sad passing, I had plenty. During all those three months, I slipped up with only a taste of wine at a luncheon at someone else’s house.

Once the yeast begins to die, you can go through a “healing crisis” distinguished by headache, flu-like symptoms, muscle pain, etc. Foggy brain and headaches were my main symptoms, and they didn’t last long. I had had frequent headaches and problems with constipation for years, and soon I began to function normally. I lost a little weight, and people kept commenting on how pretty my skin was, not that it had been bad to begin with. I just began to look healthy and feel wonderful.

At the end of the three months, I returned to Sylvia for a follow-up appointment. As soon as I walked into the room, her face lit up. “You’re clear,” she said.

At that point, and under the guidance of Jane Remington who is also a fabulous cook, I acquired a new interest in healthy eating. Soon Jane came out with a cookbook called The Yeast-Free Kitchen with recipes to support the diet, and it contains some of my all-time favorites. Just last year she also published a brilliant book called Re-Caging the Beast about the whole issue of health problems caused by Candida albicans. After you read it, the American healthcare system will never look the same.

Although reassured about my own health, I continued with the Breast Cancer Prevention Trial. It was terminated early after six years due to the discovery that tamoxifen had proven highly effective, with a 49% reduction in the number of likely invasive breast cancers. I discovered at the end of the trial that I had actually received the drug, so that kind of murked up the reason for my cancer-free life since then.

But these two different approaches were very telling, putting alternative and conventional techniques in stark relief. With regard to the yeast-free diet, the intention was to fortify the body by cleaning it up so that its own immune system could function optimally. And long-term, there are no negative side effects from healthy eating.

With regard to the conventional approach, a pharmaceutical product was designed to prevent a certain type of cancer. All participants could go on with the same lifestyle as always. I was not affected, but the researchers did discover in the course of the trial that tamoxifen could cause life-threatening side effects. These include endometrial cancer, pulmonary embolism, and deep vein thrombosis.

My introduction to the yeast-free diet made permanent and beneficial changes in my lifestyle, and I have, on the whole, been unusually healthy ever since. I have been grateful for an antibiotic for a bad respiratory infection and a painkiller after hand surgery. But the other pharmaceuticals I briefly submitted to resulted in nasty side effects, and one prescription could have killed me. But more about that later.