“By the pricking of my thumbs, something wicked this way comes.”

The witches in Macbeth

The extraordinary pace of change was much on my mind as I drove home to Santa Fe on Monday after attending my 50th high school reunion in El Paso. How could so many years have passed? How had decades left old friendships so fresh? I had had a wonderful time.

It was when we toured our high school that memories had really flooded back. Out on the tennis courts, a fellow team member and one of my best friends suddenly recalled delightedly how we had worked on memorizing lines from Macbeth as we volleyed back and forth: “Will all great Neptune’s ocean wash this blood clean from my hand? No, this my hand will rather the multitudinous seas incarnadine, making the green one red.”

As we continued to walk around, I wondered if students today are memorizing anything. Is this skill still cultivated?

And are they still chewing gum? The school that had been new when we entered looked a little worn in places. Everywhere on the sidewalks were black spots of aging gum. Funny what you notice.

Maybe reunions attract classmates who are happy in their lives. This was the first one I had attended since the 20th, primarily because I had moved so many times that only a friend with the skills of Sherlock Holmes had been able to track me down. It was a group of exceptionally nice and interesting people, many of whom I had not really known in high school and who had enjoyed extraordinary accomplishments since then. There was plenty to talk about.

There were also technologically sophisticated members of the group, many capturing images with the most advanced devices. At one point a woman lifted her phone up in the air and showed me an app that made it possible to identify constellations. “I wonder if there’s an app to track your husband,” I joked. Nothing personal, but maybe I shouldn’t have said that.

Perhaps it was that moment in which I began to home in on the way our lives have been revolutionized by technology, maybe not entirely for the better.

I had to hurry back to Santa Fe Monday for a radio interview on my book, and I needed to be at home with my land line because I had lost my cell phone in El Paso. As I went through the interview that afternoon, my land line was invaded by static. I could hardly hear what was being said at the other end, and I can only hope I was intelligible.

Both times I finally gave up. Maybe if I call close to 11:00 p.m., closing time, I’ll get some action. Remember the good old days when you talked to real people right from the beginning? More things were local back then.

I had decided that the loss of the cell phone, which I used only for travel, was a sign that it was time to upgrade. I headed off to a new Verizon store to get an Android. Because it’s a new store, there were virtually no customers, and that was a good thing. The Internet service kept going down.

The young Native American who was helping me was clearly brilliant, and he was so frustrated and determined to make the sale in spite of crash after crash that I hung with him. At one point, I asked him if we could do any of this by paper. He looked at me blankly for a moment, then started rummaging around in a cabinet searching for forms and a manual. It was clear that he was uncomfortable with paper, unhandy with a pen, and frustrated with the need to write. I bet this is not uncommon.

It was a beautiful day, I could see a touch of snow on the mountain under brilliant blue skies, and I was just glad to be back in New Mexico and able to relax. Actually I also got fascinated with the process, the writer in me moving into observation mode. I ended up staying in the store for three and a half hours.

Of course I was tired by then and got home so late all I wanted to do was charge the phone. The next morning, I couldn’t get it to turn on. Back to the store. A different young man with those flying hands of the tech-savvy young immediately turned it on. There was no such thing as “On and Off” in the inadequate brochure that came with the phone. It was “Power/Lock.” And even if I had known that was the on and off place, there were no instructions that said to press and hold.

The web site I was referred to is also confusing. I really ought to write a letter to Verizon and say, “You need to hire me to write an instructional brochure. This makes no sense at all.” In fact, I think many companies now assume an advanced level of expertise in the consumer and disregard the need for clear guidance for initiates. 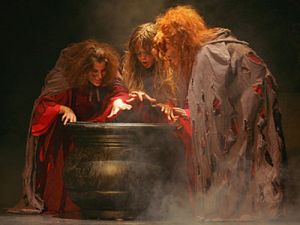 The Witches in Macbeth

I tried to work with my Android last night, waving my hand over it like one of the witches stirring the cauldron in Macbeth, in order to explore all sorts of mysterious and powerful functions I don’t really need. I have decided that if you were in solitary confinement in a prison, an Android would be a great thing to have. It would consume the hours until you suddenly discovered that your sentence was over.

That takes me back to the flow of life in high school. We had a phone at home that we used to make arrangements. Nobody did a lot of recreational chatting. During the week I suited up for tennis at the end of the school day and practiced for a couple of hours.  After that, home to dinner, hit the books, and study until late at night.

Today I am very familiar with the Internet and work at the computer much of the day. I am also up on Facebook and am learning how to Twitter to promote my work. Although it is fun and interesting, keeping up with the social media is demanding. When I think back on my high school days, I can’t imagine having had time for any of that, and yet it seems as though today’s young people are deeply invested in it.

So the question is whether all these fancy advances are really enhancing our quality of life and making us more secure or whether they are making us ever more dependent and vulnerable. They are certainly addictive for some, eating up time that could be more fruitfully invested elsewhere.

Of course I’m not the first one to notice this, and maybe my perspective will change. Perhaps when I’m incarcerated by old age, I’ll be happy for the magical, lit square in the palm of my hand. Until then, though, I’m setting boundaries. It’s not taking over my life.

3 Responses to “The Cauldron of Change”