My prickling scalp trumped the need for proof.

I wonder if I saw the future on my drive home from Albuquerque yesterday.

I had had a little adventure, an errand taking me into the western side of the city that I had never seen before. I ate lunch in a little café shaded by a giant cottonwood and just enjoyed the unfamiliar sigh of greenery along the Rio Grande Boulevard. I decided to follow it for a while before I headed east again to connect with I-25 north to Santa Fe.

The real estate along the river included farms, vineyards, big estates, and irrigated lawns and pastures where horses were kept. Some of the homes looked historic, others suggested new wealth, and a few were a little unkempt, as though the owners had fallen on hard times.

We are heading into our third year of drought inNew Mexico, and the forecast for the Rio Grande is grim. The snow packs that feed it are only 45% of average, and we’ve had dismal monsoon seasons back to back. Big trouble is looming, and it was visible even in this prime real estate along the river’s banks. Cottonwoods drink a lot of water, and they are dying right and left, as are all sorts of other trees I can’t label. I passed a whole orchard of what looked like dead pecan trees. 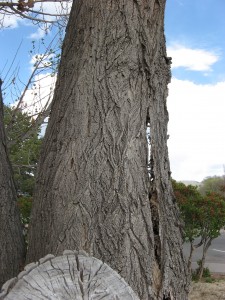 On the drive in I had been preoccupied with my new Ian Tyson CD, which has many songs about the cowboy way of life coming to an end. Nostalgia was already afoot, and it deepened as I headed north on I-25, committed to paying more attention to the landscape on the way home.

Some people may think the desert is static, but it changes constantly. I grew up in El Paso and vividly remember having to crouch down on the way to school to wrap my skirt around me for protection against stinging sandstorms. There was a bad drought there in the 50s, but then a little rain came and the sand dunes began to be covered with vegetation.

I was seeing the opposite cycle as I drove. There were gray patches of dead trees along the river beds and ravines where spring green has always assembled. Cottonwoods were failing wherever they congregated. They are such magnificent trees, striving toward towering height, their limbs adventurous, their rugged bark scarred by a tough existence. Now things are getting too tough for them.

And the hills that sometimes mist with green are now turning into sand dunes. There is the look of winter dead, winter dry, but something else is afoot, something that looks ominous. Everybody knows we’re having a drought, but this one seems to be accelerating. In Santa Fe so far this year, we’ve had .39 inches of rain, less than a fifth of what is normal. If the monsoon season isn’t good, well…

So we’re probably talking three years of drought at least, and what if we’re heading into a megadrought? Everybody who lives in the Southwest knows that the patterns of rainfall vary cyclically, but we also know that there have been dry times that lasted for decades. In fact, the twelfth century drought that launched the collapse of  the pueblo civilization in Chaco Canyon in northwest New Mexico lasted fifty years!

Due to further cycles of drought, all the people in the Four Corners region of New Mexico, Arizona, Utah, and Colorado had scattered by 1300 A.D. There are now millions in the area most at risk, and that includes Phoenix and Tucson.

That our own version of civilization in this part of the country could be destroyed by drought is incomprehensible. “This is just a cycle. The rains will come back. Everything is going to be fine.” These are the comforts afoot, but they are not founded in science.

There is actually no way to know what lies ahead, as Michael de Buys points out in his book The Great Aridness. However, in view of our knowledge of weather cycles in the Southwest, one thing is certain: The commitment to continuing growth here is very unwise.

De Buys also points out that the water conservation underway is actually perpetuating unsustainable development. For example, xeriscaping one’s property actually enables construction of additional homes that will also be xeriscaped. The wiser course would be to ban further development.

The history of persistent droughts revealed in tree rings alone should be cautionary, but another factor is in play. As de Buys points out, we now have forty-two percent more CO2 in the atmosphere now than in the time of Chaco Canyon. Science suggests that this will not only accelerate but also intensify the advancing aridity.  Some would dispute this theory. However, my prickling scalp on the drive home trumped the need for proof. We need to start taking that number down now.

2 Responses to “The Cottonwood Speaks”