It began with this sense of waiting, of expectancy. And then I tuned into the significance of the number three.

The importance of the number three is captured in the Latin phrase omne trium perfectum. The interpretation is that “everything that comes in threes is perfect, or, every set of three is complete.”

I have been thinking that, at this moment in history, humanity needs a huge breakthrough. Two enormously powerful developments are already visible worldwide, so a third may be pending that might ignite change. What could it be?

With regard to the first two, I’m thinking of the rising evidence of global climate change, especially vivid here in the huge wildfires that have been raging in California. The second development is the COVID-19 pandemic traveling the world. The third big source of concern here is our upcoming national election. However, it won’t have the international impact of the other two issues. What could happen, what could manifest, that would act as a catalyst for breakthrough? Not a third dangerous thing, necessarily, just something comparably powerful.

A factor in my speculation was my perception that humanity is experiencing about as much stress and strife as we can stand. We’re a problem on the planet and a problem for each other in a world riven by our obsession with differences rather than commonalities. What could serve to launch our higher evolution? That would be a very good thing pending.

THE TRAIL OF THREE 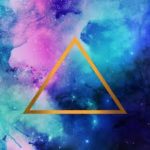 My personal speculation is a reflection of humanity’s fascination with the number three. Its trail in history is long, appearing early in the symbol of the triangle that would eventually signify all sorts of trinities. The solid base, the two sides converging in a point suggest a direction, a rise, a lifting.

The Three Musketeers may have been the first relevant hefty book we read later. However, I found a site that lists 100 good books with three in the title. The same source provides the names of 129 songs with three in the title. I wish I had been a child in 1973 when Bob Dorough came out with “Three is a Magic Number.” If you listen to this song, get ready to tap your foot.

THE MEANING OF THREE

This brief sketch does not do justice to the recurring themes of three in history, and one goes back to that phrase omne trium perfectum. Why is a three imagined as perfect and complete, even magic, and powerful? A blog by Dave Wraith responds by addressing what is known as “the rule of three.” which relates primarily to writing.

He says that “words grouped into threes are more appealing and easier to remember. Our brains are pattern-seeking machines, constantly looking for relationships and meaning in the world around us. Three is the smallest number we need to create a pattern, the perfect combination of brevity and rhythm.”

Once one tunes into this idea, examples flourish in memorable titles, sayings, concepts, directions, and all sorts of attention-getters. Below are a few examples:

And on and on. We remember the threes.

For enduring effect in communication, the rule of three also advises writers and speakers to keep to three major points in important presentations. Beyond three, attention wanes, memory fails, skepticism sets in. By contrast, completion is achieved with three: Points made, points registered, points remembered.

I can close this post with fewer words than usual because I’ve followed my own guidance. I’ve illustrated the importance of the number three through symbol, texts, and memorable expressions. However, my overlying point is that we may, subconsciously perhaps, be waiting for an epic three at this moment in time.

We have an international crisis rising through two monumental, worldwide challenges–climate change and the COVID-19 pandemic. A thing that might save us is a third element also of monumental importance–something we can’t even imagine. It might disable the other two while inspiring an awakening within humanity that, going forward, would grace Planet Earth. Do you sense it pending? Just curious.

7 Responses to “The Countdown to Three”