I love the treasure to be found in coincidence. Just imagine a connection with Crimea discovered in old office files.

I seem to be in a “clean-up” mode, which involves throwing away old papers among other things. And so I happened on memorabilia from my years working on Capitol Hill. 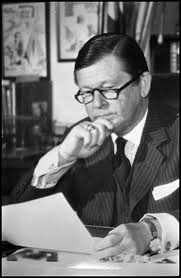 Included was a set of humorous memos sent to Senator John G. Tower (R) of Texas in the year 1975. I was serving on his staff as a legislative aide and speechwriter, although he needed the latter only for detail. Senator Tower was one of the best speakers I have ever heard, gifted with a courtly eloquence regarding even the most mundane of matters. He was a great admirer of Sir Winston Churchill’s gift with words, and that was where the story began.

My first memo forwarded a Harper’s  article by Geoffrey Bocca titled “Lessons in Eng. Lit. from Sir Winston Churchill.” Bocca, a well-known writer himself, had had a number of encounters with Churchill under circumstances that he felt contributed “a miniscule but fascinating footnote to both history and literature.”

Bocca first questioned Churchill about what great literature, other then The History of the Decline and Fall of the Roman Empire  by Edward Gibbon, had contributed to his skill as a writer. Churchill responded to the question with one word, “Kinglake.”

Bocca followed that trail, and it led first to a book called Eothan about Alexander Kinglake’s travels through the Orient. Enchanted by the writing, Bocca described Kinglake as “the personification of Victorian wit, sophistication, tolerance, and observation.”

A couple of years later, he had the opportunity to share his experience with Churchill and to ask if he would recommend further reading. Churchill responded simply, “More Kinglake.”

Bocca faltered. The only other thing Kinglake had written was his nine-volume history of the Crimean War. “It is completely unread,” he protested.

Churchill responded with eyes twinkling: “Read it, my boy. As you say, nobody reads it. So nobody can accuse you of plagiarism, can they?”

Bocca proceeded to find the set at a book store on Charing Cross Road in London at a price of about $10 at the time. He sat down that evening to read with a stiff vodka and tonic. Four weeks later he regretfully closed the last volume, bringing to an end “one of the most thrilling literary experiences” of his life.

He concluded that the volumes were largely trash as history but peerless in their mastery of the English language. He also noted that “some of the more rolling phrases and the lofty passages” seemed to echo in Churchill’s works.

Bocca never saw Churchill again, but he ended his article with a punchline. He would later learn that it was not Churchill who had discovered Alexander Kinglake. It was Rudyard Kipling who had recommended that he read him. “Beat that,” said Bocca.

The article inspired me to buy and read a copy of Eothan, which I later gave to the senator. He enjoyed the banter associated with the exploration of history and humorously offered to help me search for the nine volumes on the Crimean War if my heart could not rest “until it can be borne aloft by the soaring majesty of the English language as it leaps from the many pages of Kinglake.” I never took him up on the offer, but was thereafter addressed as Kinglake.

So what about the Crimean War? It was fought between 1853 and 1856, and Russia lost to an alliance between France, Britain, the Ottoman Empire (Turkey), and Sardinia. The story is complicated, but Napoleon apparently started it by attacking Eastern Orthodoxy to mobilize Catholic support for his own ambitions.

The war was distinguished by many errors and the ineffective use of new technologies, and it inspired all combatants to fortify their military strengths. The thing that we remember best about it is the tragic loss of life in a misguided charge of British cavalry armed with sabres against Russian cannon. The event was immortalized in the poem by Alfred, Lord Tennyson called “The Charge of the Light Brigade.” It begins as follows:

Half a league onward,

All in the valley of Death

So that is my distant connection with the history of Crimea. Now the country is back in our consciousness, as are war and senseless tragedy. I enjoyed the walk down memory lane, but I really wish there would be no new histories of war to write, no matter how well.

2 Responses to “The Crimean Connection”