If we don’t make peace in the Middle East soon, perhaps conflict will be the source of a new myth.

There were totally disparate articles in my newspaper Sunday that tied two issues together.

The first one was about Germany’s success in moving into renewable energy sources. This had special significance for me because friends from Berlin had recently visited. I was very impressed by their personal vigor and a healthy lifestyle that includes wonderful public transportation and meticulous recycling.

According to one article in The New York Times, Germany will probably be meeting about 30 percent of energy demand from renewables by the end of the year. This is more than twice our level in the United States.

The gains come primarily from solar panels and offshore wind turbines, and there are challenges involved. The country has invested about $140 billion to bring this about over the last ten years, and every family has to pay about a $280 surcharge each year for cleaner energy and the privilege of helping to stave off climate change. Of course the utilities are panicked over the loss of profit, so not everyone is happy.

However, as I read the story, I wondered wistfully how Germany had mobilized in this way. Are the people simply more enlightened than we are (from my perspective), or is it a matter of limited oil and gas reserves?

When I sought an answer to the latter question, I found in Wikipedia that Germany ranks 48th in proven gas reserves compared with the U.S. at fifth place. In oil reserves, Germany ranks 57th compared with 12th place for the United States. (These figures are collected from different sources, so they may be controversial, but you get the picture.) Russia, Canada, and the Middle East are way up there on both charts.

So as the world currently works, Germany is short in a very valuable resource, and so why wouldn’t they invest in renewables? And why wouldn’t the countries lavishly endowed with fossil fuels try to eke every bit of profit out of them that they can? To think that Germany could somehow alter that trajectory through its inspiring success with renewables seems naïve.

So that takes me to the second article in the same issue. This one was about the fact that ISIS, the militant jihadists that intend to bring all of the Muslim world under their control, is being funded by the oil fields and refineries it has captured in Iraq and Syria. The oil is being transported to Turkey where it is sold on the black market, and Turkey is so far unwilling to stanch the flow, which benefits some of their elite. The flow reportedly enriches ISIS to the tune of one to two million dollars a day. That estimate seems to be rising.

And consider that the Middle East accounts for approximately 70% of the world’s proven gas reserves and 80% of its oil reserves (again based on Wikipedia figures). Just think what power we have given to this part of the world–and consequently to its extremists–through our investment in and dependence on fossil-fuels as our primary source of energy.

As I was exploring around, I discovered the story of an Islamic hero that may relate to the ISIS strategy of the moment. Threatened by a pagan enemy, a warrior named Ali ibn Abi Talib got permission from Muhammad to take the lead in defense. He gave the enemy three options: (1) abandon idolatry and accept Islam, (2) retreat in order to avoid damnation, or (3) strike the first blow and see what happens. The pagan’s fierce leader, Amr ibn Abd Wudd, accepted the third option. As Ali stood his ground, Amr’s giant sword cut through his shield, his helmet, and his turban and gashed his forehead. Ali then struck back and split Amr in two. 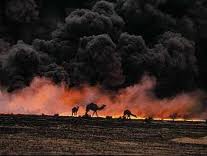 In this light, one thinks about the Western journalists ISIS is beheading one after the other. Is this not an invitation to strike first? Does anyone have a sense that ISIS has limits? If they cannot impose their ancient system of belief over all the people in their world, would they just as soon destroy it? Does the idea of turning the Middle East into an inferno of blazing pipelines, refineries, oil and gas wells seem glorious? After all, paradise beckons.

The insult, the dare, the thrown gauntlet of old are an invitation to do battle, and many in the Western world are calling for vengeance. We have superior might; why not use it? Why not call out the warrior heroes to test God’s will? For the first time in this country, however, fatigue is afoot. Our experience of victory is well in the past. The cost to the treasury and individual lives of recent conflicts of uncertain merit is a daily burden.

And finally, it seems we are at pause. That black oil under the Middle East and the uranium we have mined elsewhere have been applied to the creation of horrifying destructive potential, and it kind of looks like we are being taunted into using it. What we are dealing with in ISIS is unfamiliar to the Western mind. It is as though ISIS is mirroring for us a barbarism to which we would like to consider ourselves superior. Our military have figured out ways to distance the individual from the act, but killing is just killing.

So who knows what consequences ISIS will invoke and how costly they will be–perhaps to the entire world if the Middle East ignites. It really is a good time to hit the pause button and to explore new approaches to peace. If we don’t, there may ultimately be a need for a new myth to explain things to the young of the next millennium:

Once upon a time, there were kingdoms of people who lived peacefully upon the earth. Beneath lay kingdoms of minerals beyond the reach of human eye and hand. Then one day a nugget of gold appeared in a landslide, and people in the kingdoms above began to dig out of curiosity and discovered all sorts of wonders. Unfortunately delight eventually turned to lust for all the riches and the power that could be acquired through the kingdoms below, and they invaded.

For years the people in the kingdoms above ground experimented with the riches of the kingdoms below. They did not know, however, that what they took by force needed only to catch fire in order to escape and seek revenge. Eventually they turned to evil use in wars among themselves, until one day they ignited a conflagration beyond anything they could ever have imagined.

Those who survived learned an important lesson. This was to cherish all the riches that Mother Earth had so generously provided above ground, riches supplemented with the gentle power of wind and sun. They also learned that the riches residing in kingdoms below were to be left there, where all that was black and fiery belonged.

Kind of simple, but myths usually are. I hope it doesn’t come to this.

One Response to “The Dark Kingdom Below”