The archetypal hero of old slayed the wicked dragon. But today?

Sunday there was a great article in The New York Times about the extraordinary suicide rate of the Second Battalion, Seventh Marine Regiment, that deployed to Afghanistan in 2008. Of about 2,000 men, 13 have since committed suicide. This is unusually high, but about 22 veterans are killing themselves everyday. For the first time and through this article by Dave Philipps (“A Unit Stalked by Suicide”), I began to understand why.

It was as though this battalion had deployed to an ancient version of hell to destroy the myth of “the thrill of combat.” War must always have been hell, but prior to the advent of psychoanalysis, men may have hidden the truth. Here some share experiences so horrifying that death has become a welcome escape from the nightmare of memory. Perhaps their sharing will serve a general awakening.

Their memories are not about heroism as we imagine it. One gets a sense of overriding guilt–about the friends who couldn’t be saved for example, about an old woman with a rocket-propelled grenade who had to be shot to death, about being unable to find a proper bag for the body parts of comrades, and about having to kill so many people, so very many people.

The day after this article was published, another appeared about how American forces in Afghanistan have also had to stand by while village commanders used little boys as sex slaves. Apparently child sexual abuse is rampant in Afghanistan, and our troops have not been allowed to interfere. The word is that this is the province of Afghan law. 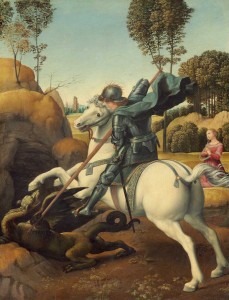 But how must experiences like these affect a psyche informed by ideals of service, bravery, and honor? The archetypal quest of the hero is to find and slay the wicked dragon. What happens when you look in the mirror and see its reflection? Some veterans turn away and get the rope, the gun, the drugs to kill it.

And yet two days after this article on suicide was published, David Petraeus, who had commanded the U.S. Forces in Afghanistan in 2010 and 2011, urged members of the Senate Armed Services Committee to build up military leverage in the Middle East. He believes that if there is ever to be a political settlement, it will happen only within a military context. Every command must still be hoping for a win, somehow.

This is a man thing mostly, I think. So I turned to The Beacon Book of Quotations by Women to seek the feminine perspective on war. It was very consistent, and here are some examples:

“You can no more win a war than you can win an earthquake.” (Jeannette Rankin, 1947, first woman in Congress.)

“War is the unfolding of miscalculations.” (Barbara Tuchman, 1962, American historian and author)

“Everything, everything in war is barbaric . . . But the worst barbarity of war is that it forces men collectively to commit acts against which individually they would revolt with their whole being.” (Ellen Key, 1916, Swedish feminist writer)

“War, which perpetuates itself under the form of preparation for war, has once and for all given the State an important role in production.” (Simone Weil, 1933, French philosopher and writer)

“I dream of giving birth to a child who will ask, “Mother, what was war?” (Eve Merriam, 1989, American poet and writer)

Very wise voices, I would say. And perhaps with regard to that last quote, war could become a thing of the past if such speakers had more say in world affairs. Do we yet have time for that?

4 Responses to “The Dragon in the Mirror”