This is the bitterest of all–to wear the yoke of our own wrong-doing.

Since we’re still in the zone of New Year’s resolutions, I thought I would write about one I wish we would embrace as a country.

The idea came to me as the result of a lecture I heard in December. The topic was “Our Spiritual Relationship with the Earth,” and the speaker was Leo Killsback, Ph.D.  A member of the Cheyenne nation in Montana, he is an assistant professor of American Indian Studies at Arizona State University.

Dr. Killsback is a soft-spoken, gentle young man, and there was no recrimination in his voice as he shared information about his people’s sacred places and their history. The Cheyenne won the Battle of Little Bighorn against General Custer, and the consequences were severe. However, the assault on their freedom and way of life had begun much earlier. There was only one moment when Dr. Killsback expressed a living resentment. He mentioned our November holiday and, with a wry smile, said that the Cheyenne refer to it as “Thankstaking.”

When the speech was over, I slunk off into the night, or that’s the way I felt. There are so many dark chapters in the history of our relationship with Native Americans. At this remove, we wonder, “How in the world could we have done these things? Is this who we really were? Is this who we are?” It wasn’t that long ago, after all, and the mistreatment of people deemed inferior because they are different and “in the way” goes on. It doesn’t line up at all with the values we profess, with the pride we have long felt about being exceptional, evolved, and a leader setting standards for the rest of the world.

The truth is that our style of leadership is much in the nature of the bully, both economically and militarily. It has become urgent that we develop skills in cultivating relationships. Having recently posted a blog on the black truffle of Europe, I think it has much to teach us in this matter.

If you read that blog, you will remember about the truffle’s symbiotic relationships. These are with trees, pigs, squirrels, and flies. All of it reminds me of the linkages in the old nursery rhyme about the “House that Jack Built.” It inspired a verbal trail that goes like this:

We never know when to stop, because it is the getting of whatever and the selling of  more and more of whatever that eventually trumps our relationship with the natural world. The result will look like this: “These are the people who took the land, who killed the wildlife, who cut down the trees, who mined and drilled the riches, fouled the waters, polluted the air, destroyed the shade, and  heated up the world so that not even they could live.” 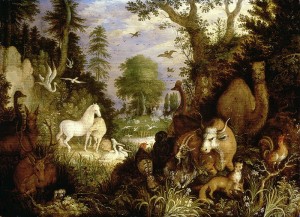 The Garden of Eden

Of course, we don’t have to go that far, but it takes stopping and thinking. We have memories, we have art and stories that tell us how beautiful, how hospitable this earth has been. And all we have to do is look around to see how we have altered it for the worse. Sometimes I try to come up with one creature that is better off because we have been here, to imagine one natural landscape that has become more beautiful by our hand, soil somewhere that is richer, and water and air anywhere that is healthier because of our presence. I fail. There is a shadow side even for domesticated animals.

And this brings me to the proposed resolution. If America were to begin to live up to the pride we feel in ourselves, we will take Dr. Killsback’s message to heart. We really need to learn about the importance of relationships with each other and the natural world and transform our lives accordingly. We could begin to balance all the taking with much more giving to ensure that health, space, food, and freedom are more fairly shared among all life on earth. We could resolve to do away with Thankstaking altogether.

In fact, we have been rather rude as we feasted on earth’s bounty. I wonder what it would be like, as a human being, to feel welcome at the table among all creation.