New Mexico became a state in 1912. Declining economically after being left off the railroad line, Santa Fe determined to become an exotic tourist destination, “The City Different.” It’s architecture and history–including its history of ghosts–have become enormous assets.

I trust in synchronicity, and I was inspired by one to reboot my blog. I have to take a break every now and then, and it was a high school classmate who now lives in Berlin who gave me the idea for this post. She suggested writing more about New Mexico and its unique culture. The next day, which was Halloween, guidance arrived in the newspaper.

An article taken from The Washington Post was prominent. It was about “Hair-raising tales at the White House ” by Theresa Vargas, and it seems that the spirit of Abraham Lincoln is very active there. At the bottom of the page was the announcement of a “Ghost Tour” of Santa Fe that evening. Bingo. I made a reservation. 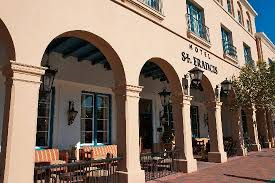 The two-hour walking tour guided by Peter Sinclaire, a colorful figure in a clown nose and a wig of iridescent red plastic, started at the historic St. Francis Hotel, which is itself haunted. We were told of odd goings-on in the bar. The bartender has described an evening in which a ghost was shoving bottles around and destroyed shakers for the lemon drop cocktail, which is no longer served. In addition, we were shown a photograph from the outside at night of one of the hotel windows revealing a small, illuminated figure in a stairwell, which may be a child of the historic Ortiz family that once lived on the site. 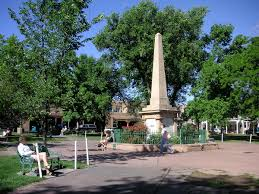 Before setting out to walk to the Plaza about a block away, Peter warned us to be careful crossing the streets, because he didn’t want us to create “a new ghost for the tour.” It has been unseasonably warm in Santa Fe this fall, but an appropriate chill was rolling in. The streets were quiet, and only a few people were walking around in fragments of costume.

We stood by the American Indian War memorial as Peter rambled widely over ghost lore. Across the way and under the portal of the Palace of the Governors, a man was filming two bent figures in period dress, one on a cane, another trailing a transparent veil, moving toward him at an excruciatingly slow pace. 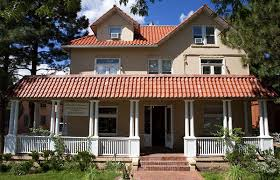 Peter’s focus as he talked settled on a house of Victorian architecture a few blocks away, which preceded the institution of Spanish/Pueblo Revival Style in 1912. Known as “Santa Fe Style,” it was embraced by city fathers to turn Santa Fe into a tourist attraction, which has worked beautifully. The house in question, constructed in 1905, is located at 122 Grant Avenue. Currently the home of the Andrew Smith Gallery, it looks serene and homey as opposed to creepy. However, it was the tragedy of an unwell little boy who lived and died there that left a residue of violent energy.

For years, the house was a bed and breakfast, and the former caretaker had many memories of the sound of temper tantrums in the boy’s former bedroom on the second floor, drafts of freezing air that killed indoor plants, and the stench of rotting meat in spirits that would occasionally manifest. The most disturbing tale, though, was that of a visiting cat that hissed and growled outside the door of the troubled room. It was later found in a refrigerator, alive, placed there by unknown hands. 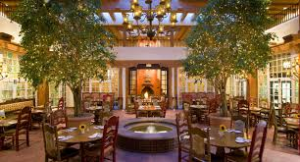 Next, we went to La Fonda Hotel, site of murders and a suicide commemorated by apparitions. Our focus was La Plazuela, the dining room which had once been an outdoor area and the site of a well. Peter told of a gun salesman who had arrived there one night in the old days, his saddle bags stuffed with money, including his sales commissions. He took the saddle bags into the bar where men were gambling, and by the end of the evening, he had lost everything. He went mad on the spot, ran across the open space to the well, flung himself in, and drowned.

I have a close-to-home account of activity there. In the 70s, my brother and his wife stayed there two nights for a veterinary conference. The first night, a light across the room turned on and woke them up. My brother got up and turned it off. It came on again and he unplugged it this time. Later they were both awakened by noise at the foot of the bed. There was a big trunk there, and the lid was now up. My brother, who is not the least bit into woo-woo, got very animated recalling the oddity. Fortunately, the next evening was quiet. 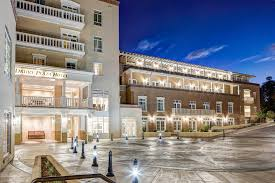 On our way to La Posada, the high point of the evening, we passed by the Drury Hotel, which had once been St. Vincent Hospital. In its in-between years, there were many accounts of blood manifesting on floors. Once an elderly woman in Peter’s group who had worked there long ago told about strangeness in the kitchen. She said that it was impeccable, but no matter what they did, they repeatedly found hair balls in the freezer. (!) The conversion from abandoned hospital to hotel has happened only recently. I wonder how well it is doing.

La Posada is the site of the most famous ghost in Santa Fe, Julia Staab.  She moved here from Germany in 1865 as the wife of Abraham Staab, who had become an extremely wealthy merchant after moving from the village where they had both lived.  The beautiful three-story mansion that would eventually become La Posada was completed in 1882. 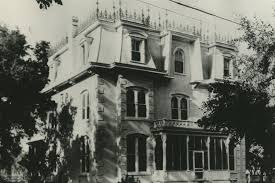 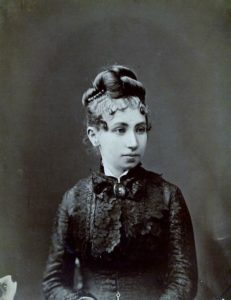 Julia, who was reportedly very sensitive, had seven children, but the last, a son, died soon after birth. It is said that one failed pregnancy after another followed, six altogether, and she became depressed and retired permanently to her suite. She died at age 52 in 1896. In the 1930s, after the top floor of the mansion burned up, it was acquired and became the centerpiece of La Posada, with Pueblo Revival casitas scattered among landscaped gardens and a fountain. 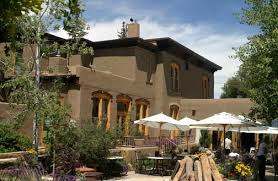 The name, “La Posada” is Spanish for “inn” or “resting place,” but Julia does not rest there. Her white-haired presence has been detected many times and in many ways, like standing by a fireplace, resting in a chair, and walking down a hallway. It’s especially likely to sense her in her second-floor suite, Room 256. Perhaps it was unwise to name Julia’s Bar after her–doesn’t sound like her personality.

I heard this history standing with my group in a back hallway of the mansion part of the hotel. The walls were lined with paintings for sale, so I couldn’t lean against one. The moment came when I suddenly began to feel nauseated and faint and had to go sit in a chair on what would once have been the front porch of the mansion. Head in hands, I began to recover. Was the sinking spell due to Julia’s fretful presence or the two vaccinations I had had that morning?

I don’t know, but I was glad for the cold, fresh air as I walked alone on dark streets back to my car. I felt safe. Reality is good. I love stories, but reality is good.

I wonder if Abraham Lincoln has visited Donald Trump yet. He would have to turn out all the lights.

4 Responses to “The Ghosts of Santa Fe”