This is all about critical mass as the catalyst for transformation, and this is in regard to the introductory statement in my last blog: “We can’t keep this up. We’re going to have to change.” Perhaps you’ve noticed that this idea is traveling, verified in new numbers on many fronts.

The quote doesn’t refer to anything in particular, however. The seminal realization is that it’s just time for humanity to rethink how we live on this planet. A kind of cosmic truth, it has to be perceived worldwide to serve our survival, but an awakened critical mass here in the United States would certainly be an auspicious beginning. 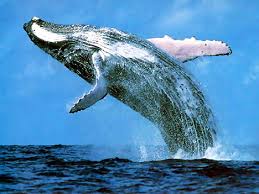 The problem is that we’re all so different that the moment of “I get it” regarding the peril afoot will come in an infinite number of ways. Numbers are especially important here in the United States when preceded by a dollar sign. As reported in the Washington Post last week, the great whale has suddenly breached in the awareness of economists because one of their number, Ralph Chami of the International Monetary Fund, has for the first time attached a dollar figure to its value–$2 million per whale.

Chami studies macroeconomic policies in developing countries. Stunned by the figure he had come up with, he confirmed his conclusion with two outside economists before sharing this finding. Additional outside research has set the value of the world population of whales at $2 trillion. According to author Ben Guarino, this is “due to whale tourism, the nutrients whales disperse and the carbon captured by their massive bodies.”

This carbon capture function is extremely important to scientists trying to identify ways to mitigate climate change. An average great whale is estimated to capture around 33 tons of carbon dioxide in its body. This compares with about 4.6 tons of carbon dioxide per year released by a car. During the 100-year height of the whaling industry ending in 1999, about 2.9 million whales were killed. I’m not good at numbers. How much carbon dioxide running free does that amount to?

Very big numbers altogether, right? Scientists have so far been pretty frustrated by the way their findings have been dismissed. Wouldn’t it be funny if the most effective perspective comes from economists assessing the dollar value of each threatened species. Aren’t we threatened? I wonder what we’re worth. 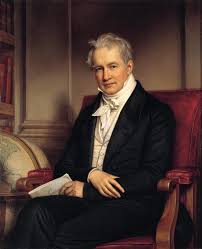 As I was thinking about this article on the great whale, the term “the web of life” came to mind. I had encountered it many years ago, probably in one of my books merging nature and mysticism. A little research revealed that it had originated with a once-famous Prussian explorer, geographer, and naturalist named Alexander Von Humboldt. Born in 1769, Humboldt explored the Americas extensively between 1799 and 1804. He described what he saw from a scientific point of view in numerous books, including his five-volume Cosmos: A Sketch of the  Physical Description of the Universe. According to Wikipedia,  he was “the first person to describe the phenomenon and cause of human-induced climate change.”

But back to the web of life. Although Humboldt had been largely forgotten, he returned to great acclaim as a result of Andrea Wulf’s award-winning book, The Invention of Nature: Alexander Von Humboldt’s New World, which came out in 2015. In a speech the next year, Wulf said that “Humboldt invented a concept of nature (the web of life) that still very much shapes our thinking today. He described the earth as a living organism where everything was connected, from the tiniest insect to the tallest tree.”

We need to know more about that, meaning the role that each creature and insect plays in that web. When I looked up images of the web, they all invoked the spider web, and they have a center. I think we probably think of ourselves at the center, primarily because of how smart we are, but also because of the Bible. I refer to Genesis 1:26 in which God gives man “dominion” over every creature that swims, flies, walks, and creeps on the earth.

OUR PLACE IN THE WEB

However, as word rolls in about the degree to which we have drilled, mined, pillaged, and polluted the earth and destroyed the habitat of so many creatures, one begins to wonder about this decision. If Michelangelo were alive today, he might paint an image of God seated on top of a mountain, fist gently striking the third eye of the forehead, voice repeating over and over, “What was I thinking?”

Now back again to the great whale.  According to the World Wildlife Fund, seven out of 13 of this species are endangered or vulnerable. And again, the entire population of whales, big to small, is valued at $2 trillion. To preserve them, we don’t need to increase emissions to make them more plump. Instead, we could ratchet back on exploitation and focus on making their habitat more healthy and safe. 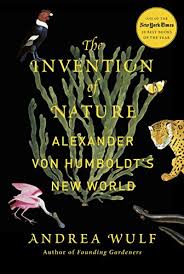 And as smart as we are, we can probably figure out how to give back in a way that will benefit all life on earth–and maybe even at a profit. In search of inspiration, I hope many readers will join me in reading The Invention of Nature, which I acquired Sunday. I think it may be like going on a great adventure–safely–in the wilds of nature. I bet we will return caring more about it than we ever have before.

P.S. For some reason, cousin Cary’s comment wouldn’t load, and since his perspective is very valuable to me, I thought I would append it. Here it is:

Hi Ellen,
I read your blog on the value of whales with great interest.  I had no idea whales create externalities of such benefit.  The basic conclusion of economic theory is that positive externalities should be subsidized. Of course, economic efficiency requires, theoretically speaking, that FULL costs and FULL benefits be equated at the margin.  No one knows exactly where that happens, in terms of “the marginal whale.”  But it seems obvious that extinction is suboptimal!  Probably the best we can do is ensure whales’ survival, and know that the planet is better with whales than without.
Cary Heath, Ph.D.
Full Professor
Faculty of Economics
B.I. Moody III College of Business Administration
University of Louisiana at Lafayette

6 Responses to “The Great Whale Breaches with a Message”