I refer to the Allan Houser Sculpture Garden on open land about 13 miles south of Santa Fe. A Chiricahua Apache, Houser is an internationally renowned artist. His birth name was Allan Haozous.

I had seen and admired Houser’s art in many places in Santa Fe, but a walk among his sculptures on a very hot day under a brilliant blue sky was a revelation. This pertained not only to my own realized ignorance about Apaches but also to the relevance of his genius in the moment. I was in a group guided by David Rettig, curator of the Allan Houser Collection, who was extremely informative. However, I was soon seeking to learn more from a biography written by W. Jackson Rushing III.

The sculpture above and the images at right give a hint of how Houser’s work evolved, but its full range is stunning. Having begun life as an “Apache farm boy,” as Rushing  described him, Houser had a gift that would carry him farther in the world than any of his forbears could have imagined. Now, back to the beginning of that history.

Immigrant anxiety is high profile in America now, but in the beginning of Houser’s story, the immigrants threatening the Apache were our ancestors from Europe. Up until the time of our arrival, the nomadic Chiricahua Apache had claimed a territory of about 15 million acres in parts of New Mexico, Arizona, and northern Mexico.

Conflict began in New Mexico in the 1850s over the drive to develop mining in the state. The Chiricahua fought the invasion of their land, and  the US military intervened. Led by Geronimo, the Chiricahua were defeated in 1886.

Over the ensuing 27 years, about 500 Chiricahua were serially imprisoned in Florida, Alabama, and finally Ft. Sill, Oklahoma. When those who survived were set free in 1913, they were given the option of joining the Mescalero Apache in New Mexico or remaining in Ft. Sill. Houser’s family chose to stay in Oklahoma. In 1914, he was the first child born in his family outside of prison.

Houser received some education in Oklahoma Indian and public schools and early revealed artistic talent. However, he grew up working on his father’s farm, which he might have inherited. His life as an artist began finally at age 20 when, as Rushing put it, “Houser made a courageous and fortuitous decision to decamp for the Santa Fe Indian School (SFIS) to study art.” 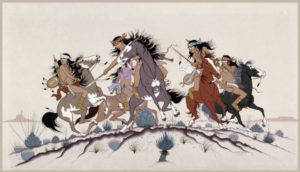 His journey toward a career was not to be easy, however. Very soon after enrollment in art classes, he had to contend with the intention of his teacher, Dorothy Dunn, to confine his work to replicating traditional Native American art. He became a master of that style, but for the rest of his life, his interests would range all over the history of art and its evolution internationally, and he gave himself the freedom to experiment.

However, the era of total freedom did not begin for Houser until retirement. For decades after leaving the Santa Fe Indian School, he provided for his family by teaching art at the Inter-Mountain Indian School in Brigham City, Utah, and at the Institute of American Indian Arts in Santa Fe. All the while he gained growing acclaim for his own skill.

Upon retiring at age 61 “when most artists begin to slow down” as  Rushing put it, Houser began to pour himself  into his art “with confidence, vigor, and enthusiasm.” He sketched and painted; but he also carved wood, worked with stone and marble, and taught himself how to cast bronze and create sculptures of steel. On the day of my visit in the Garden, there was evidence everywhere of how energizing freedom had been. 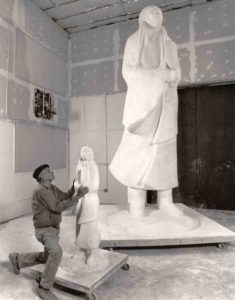 Talent untethered, Houser experienced moments of joy: “Sometimes, when I am in the middle of something especially challenging,” he wrote, “I stay awake all night, as if drunk with the excitement of it, anticipating the work the next day, and thinking about the special problems that are waiting to be solved.”

TRANSCENDENCE  IN THE GARDEN

In the open air of the Sculpture Garden, one gets a view of how Houser’s late art evolved, as in the series of images below. 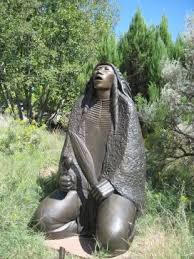 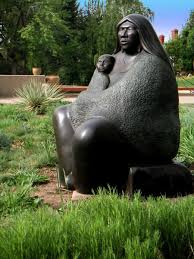 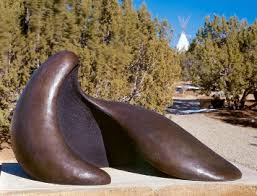 His work serves to connect visitors with Native American spirituality and strength. There seems to be no evidence in any of his works of anger or bitterness about the way his people had been treated, and there is no trace of this in Rushing’s book either. Houser’s focus was on his art, and its power seems not only to transcend history but also to raise the Chiricahua themselves above it.

Walking through the Sculpture Garden on a very hot, dry day, I found the statue of the “Sacred Rain Arrow” with which this post begins particularly affecting. It represents a ritual during a time of drought, the arrow aimed at “The Great Mystery” with a prayer for rain. The need for such rituals promises to continue and intensify in the West.

And I will conclude with the statue called “Unconquered II”. Surely the spirit of the Chiricahua has been lifted by all of Houser’s stunning images of their courage and dignity as well as the monumental, artistic daring of Houser himself. This casting was completed in 1994, the year Allan Houser died of cancer; but his work and his fame may endure forever, as we understand it. 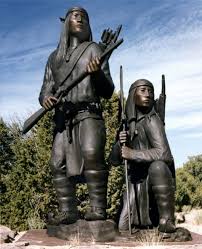 One Response to “The Greatest Apache”