If climate science doesn’t resonate, how about Hopi prophecy?

I believe in the possibility of being guided by coincidence, and that’s how I came up with this post.

I was thinking about my last blog on climate change when I meandered into a book store in Santa Fe called Op. Cit., a term that means “in the work already cited.” It’s a wonderful store, shelves stuffed and boxes piled almost to the ceiling with quality books being sold very cheaply as second-hand or overages. Every time I visit, I get overwhelmed by what I should have read, what I would like to read, and the knowledge that I am running out of time.

On this particular day, an orange book perched on a stand caught my eye: The Hopi Survival Kit, The Prophecies, Instructions, and Warnings Revealed by the Last Elders by Thomas E. Mails. When it was published in 1997, it created quite a stir. The message was that an imminent and catastrophic event would signal the end of the fourth cycle of life on earth, the one in which we are currently living. The attack on the Twin Towers occurred four years later.

If 9/11 was the beginning of the end–let’s take an imaginative leap–could climate change also figure in that ending? I spent most of the next three days reading the book and learning about the history of the Hopi. The author, who had written many other books on Native Americans, was supposedly summoned for this work by Dan Evehema. He was the last of four elders who were the keepers of Hopi prophecies and wisdom that were to be passed on to save mankind. Evehema was about 108 years old when he died two years after publication.

The story of the Hopi, about which I was totally ignorant, is fascinating, and my apologies for summarizing as I need to here.

According to Hopi tradition, Massaw, a strange being who was the emissary of the Great Creator, helped humanity emerge from the Underworld at a place called Sip-pa-pu in the floor of the Grand Canyon. Massaw disappeared after that, and as directed by the Creator, people wandered the earth for thousands and thousands of years. They were told that Massaw, the Guardian of the Earth, would eventually reappear and show them where to settle. Apparently this was a testing time, and the Hopi differentiated from what would become all the other Native American tribes through their extraordinarily peaceful nature and their dedication to living a simple life steeped in rituals seeking oneness with Mother Earth.

Evehema explained that Massaw reappeared in AD 1100. He was chipping on a rock in northern Arizona at a place on the Black Mesa called Oraibi, which would become the home of the Hopi. He stayed with them for a while, sharing a “pattern of life” they were to follow in order to align with the ways of the Earth. With certain chosen individuals, Massaw shared more than 100 prophecies relating to the way the human experience would unfold, and the source of these was the Creator.

These proceeded to be transmitted by word of mouth for hundreds of years. Apparently it was known from the beginning that cycles were afoot. According to Hopi tradition, one had ended with fire, another with ice, and the third with flood. Every cycle has an end, and the Hopi were warned that the fourth would conclude with a “purification.” However, through instructions and warnings, it was revealed how some could board a “Spiritual Ark,” and survive. 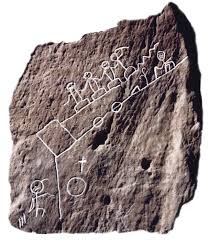 The Road Plan at Oraibi

The vision Massaw shared called The Road Plan is etched in stone outside Oraibi, and it appears above. (It has been modified so that the carving is more visible.) Here we see how it was foreseen that the path of humanity would divide basically between those who lived simply and peacefully and were consciously attuned to the earth (the “one-hearteds”) and the materialists (the “two-hearteds”) who might eventually destroy it.

The figure at the lower left (Maasaw) holds the reed through which humanity escaped from the Underworld. The path on top is the one followed by the materialists; and as you see, it leads to a zig-zag that dead-ends. The lower path is the one followed by the Hopi, the people of heart. It goes through and beyond three great obstructions and then travels on endlessly but via the Hopi traditional life in the cornfields.

Among all the prophecies is, of course, the appearance of the Whites, the “Bahannas” who would proceed with conquest until the last Native had disappeared. As in all the prophecies, however, there was the suggestion that if the Hopis remained faithful to the pattern of life, they would live on. Today there are about 18,000 Hopi living in 10 villages on the Black Mesa, and the village that adheres most strictly to traditions seems to be Hotevilla (population 767 in 2000). Mails suggested that as long as it faithfully endures, mankind will as well.

Interestingly enough, among all the prophecies is a reference to a “gourd of ashes” that will drop  “and mankind will end up in the lowest level of darkness where they will crawl on all fours forever.” It is assumed that the gourd represents the nuclear bomb, and the third obstruction on the lower path in the Oraibi carving symbolizes a third world war. There are also references to climate change among the prophecies. In this case, however, the cause is Mother Earth, enraged by the ways in which she has been abused.

Many of the prophecies have come true already. I especially liked the ones saying that (a) “There will be roads in the sky,” (b) “There will be moving houses of iron,” and (c) “Men will have the ability to speak through cobwebs.” And I saw truth in yet another: “Women’s skirts will be raised above the knee, devaluing the sacred body of the female. . .”

As I said at the beginning, the Hopi believe that they are the keepers of the way mankind may survive in spite of the seemingly inevitable closing of the fourth cycle. As Mails put it, the requirement is that “human beings the world over must undergo a total change in attitude regarding life and the environment.”

This is a very tall order indeed for us Bahannas, and yet these words resonate. To put it simply, we have made kind of a mess of America and need to do something. It is helpful to imagine that the way in which each of us lives can make a difference. So here you are, the requirements to board the Spiritual Ark. They include:

In conclusion and with regard to practicing self-sufficiency, as in the fourth item above, I will share that a friend is at the moment working on a wonderful book about this. How’s that for another meaningful coincidence? If you pay attention, guidance manifests.

One Response to “The Hopi on Climate Change”