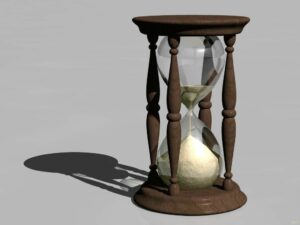 Is this the moment when just a few grains of sand remain?

In my last post, I pointed out several ways in which the human presence on Earth is causing problems. In short, there may eventually be too many of us to be sustainable in an environment we have also damaged. The moment may have come to take the long view in order to course correct. And although the very large human brain and the achievements therefrom have played a major role in bringing us to this perilous moment, that same resource can enable us to address it. First, however, there must be an awakening.

So the symbol above represents this moment in time. Those last remaining grains in the upper half of the glass signify the items of news rolling in daily that confirm the seriousness of the moment. When the last grain falls, we could reach for the glass and turn it over to begin a new era. It would signify a universal leap in human consciousness. As we go forward, it might be helpful to remember this symbol, not as an hour glass but an “era” glass.

And as urgency ramps up with the drop of each grain of alarming news, an idea may also be of comfort. What if each one of us who is fully conscious of this dangerous moment in history chose, in a soul state, to be here? Perhaps we have business with it, we have something to learn from it, we have a gift or knowledge that will be helpful in dealing with it, or we simply chose to be present for some reason yet to be determined.

That idea may be especially timely for elders because we have the long view mentioned above of the developments that brought us to this critical juncture. This idea can also ensure higher regard for younger generations because we can imagine enormous courage in their presence–more than we needed coming into life–and aptitudes yet to be discovered that will enable them to meet the challenges of the century. With that idea in mind, we may create new ways to support them when many others are cultivating fear in community to increase their own stature and power.

HEROISM IN THE WINGS 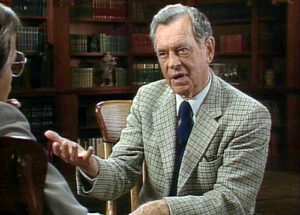 What we need in the moment is to develop a potential for a quality of heroism that will lift us all. That brings to mind all the books by the great mythologist Joseph Campbell that I read in the 80s. The foremost was The Power of Myth, which derived from a six-hour PBS series of interviews with Bill Moyers.

The interviews touched on countless stories Campbell had studied about the archetypal hero appearing in teachings all over the world. The most vivid and enduring image is of a brave male who embarks on a perilous journey into the deep dark woods to discover his destiny. He is transfigured by his experience and returns to teach the lessons he has learned from a life renewed.

In spite of the wonder of all the mythologies in Campbell’s books and the tremendous fame and public gratitude they inspired, Campbell’s perspective had begun to change by the time he was 83. In an exchange with Bill Moyers, he said that “when you come to the end of one time and the beginning of a new one, it’s a period of tremendous pain and turmoil. . . the notion of Armageddon coming.” This was in about 1986, but the reference seems to align with the current moment.

Campbell also detected the ebbing influence of the spiritual sources of the earliest myths. He spoke of the need for something new, a myth unconfined by geography or communities, a myth without boundaries. “The only mythology that is valid today,” he said, “is the mythology of the planet–and we don’t have such a mythology.”

As Campbell approached his death in 1987, he seemed to be exploring the idea that the mythology of the planet would relate to nature, and the feminine would gain new standing in that regard. “Since her magic is that of giving birth and nourishment as the earth does,” he said, “her magic supports the magic of the earth.” 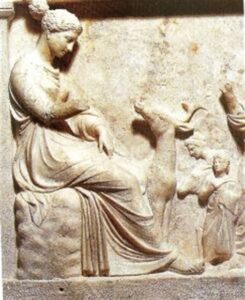 There seems to be a reference to a goddess of old in that statement; and these spirits, as in the Greek goddess Artemis, were often closely connected with the natural world. One of our problems is our distancing from it. However, greater earth consciousness may be emerging from our awareness of how we have depleted natural resources and are suffering from extreme weather events emanating from climate change.

At the same time that there is growing concern about population growth, the feminine’s role in this regard is changing. Stature and independence are increasing, and that is affecting breeding patterns. Women have been encouraged to bear children not only to create families but also to provide followers for power-seeking entities, laborers for construction and agriculture, and troops for the military, etc.

In summary, women are enjoying greater independence and authority than ever before. Many will continue to want to create families, but others will be driven to cultivate intelligence resident in a brain no smaller than that of the male but that hasn’t been comparably accessed and developed. With the feminine’s innate aptitude “for giving birth and nourishment as the earth does” a rise in standing supported by increased opportunity could be key to our species’ survival.

When one thinks about how tragically the beauty and abundance of this pristine continent have been compromised since the arrival of our ancestors just 400 years ago, two conclusions begin to surface. It is very clearly time (1) to rethink our way of being here and (2) to begin cultivating an earth consciousness that could result in an evolutionary leap.

And my last point is that new, incontrovertible evidence of planetary danger may be pending. When it drops into our awareness like the last grains of sand into the bottom of the hour glass above, for the first time in human history, the feminine hand may partner in turning it over to begin a new era. If so, this will not manifest as a rebuke to the masculine. It will simply confirm the way new life and new eras naturally emerge cyclically on Planet Earth, and now the time has come for . . . .

And what a coincidence! Just as I prepare to post, a friend has sent a link to a post by the Center for Action and Contemplation in Albuquerque. It shares quotes by Martin Luther King, Jr., and Victoria Loorz, co-founder of the Wild Church Network, on the importance of restoring relationships with humans and nature. I think readers will greatly appreciate their views.

2 Responses to “The Hour Glass Waits”