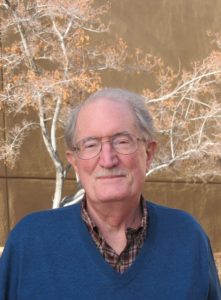 Tom Taylor always loved being out in nature–backpacking, hiking, and kayaking. However, during our interview, he said it was as though he were wearing blinders. “I knew stuff was around,” he said, “but I didn’t see it or hear it.” And then early in the 90s, he went on a Christmas bird count in the little community of Tesuque northeast of Santa Fe. Present was one of the best “birders” in New Mexico, and Tom’s life began to change.

I know Tom as a fellow tutor at Santa Fe Community College. Retired from Los Alamos National Laboratory, his 25-year career there began as a surface scientist. As he explained it, “This involved experimental measurement of the geometry, composition and bonding of the topmost layers of surface atoms on solid materials.” Obviously, he was extremely skillful in observation. After that Christmas bird count, his eyes lifted to the skies.

He wants to share the wonder of the ensuing experience. He recently did so at a jammed meeting at the Randall Davy Audubon Center and Sanctuary in Santa Fe. Tom presented a brilliant slide show that framed in riveting imagery, bird song, and commentary all he has learned over the last six or seven years of being a bird photographer.  (Tom compares the presentation to the “defense” of his doctoral thesis.)

The accomplished birders in the audience were fascinated, but so were I and the guests I had brought. Tom’s goal of effectively sharing with the uninitiated the awakening he had experienced has clearly been achieved.

Tom’s presentation focused on the migrations of birds in the Western Hemisphere that he calls “a flow of life,” of which most of us are totally unaware. Over the years, his own journeys to study birds began to cleave to their migrations, and he has traveled widely. Each trip is a “revelation filled with excitement,” he said, and also affords an important connection with the birding community.

An early trip he will never forget was to the Magee Marsh Wildlife Area 10 miles north of Oak Harbor, Ohio. The marshes became famous in the 1800s as a great waterfowl hunting area, which led to the decimation of wildlife. This led to the control of hunting in the 2,000+ acre area and also to bird watching by thousands of visitors.

Tom first visited the area around 2005 during spring migration, arriving on the threshold of a huge storm. The next morning a big wind drove down into the parking lot vegetation more songbirds than Tom had ever seen. The countless birds were met by nearly as many people. For three days, “rookie” Tom moved around among the visitors, learning things from everyone he spoke to.

As the years passed, his travels ranged ever wider–to Ecuador, Panama, Guadeloupe, Honduras, Costa Rica, Puerto Rico, Martinique, Dominican Republic, and even New Zealand. Along the way, he became an expert photographer and began to collect the data and do the analyses intrinsic to his training as a scientist. He also has mental lists of all the birds he has seen in life, all he hopes yet to see, and all he has photographed. 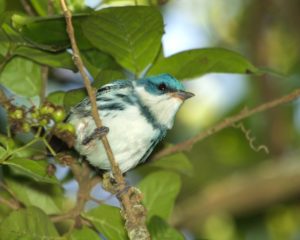 For example, Tom has yet to photograph four of the roughly 30 sparrows commonly found in the lower US. He has other goals in the warbler category, running short of three of roughly 45 in number. His “nemesis,” he says is the Connecticut Warbler. He has failed to photograph this bird–although he has glimpsed it several times and heard it singing in the trees in northern Minnesota where it nests in the summer. In spite of his excitement, he knew better than to tempt fate and enter into the potentially bottomless terrain to get a good look. Birding can apparently be a physically arduous and an even dangerous pursuit for zealots.

Of course, as the years went on, Tom became increasingly aware of how climate change was altering the timing and course of migrations and also reducing populations. He was concerned, but he also became very tired of all the negative flow of information, the fear-based logic, and the tendency, as he puts it, to look at nature as a separate world. The need, Tom believes, is to balance concerns with the joy of engaging with the natural world. This involves awakening children to it, as his own father did when he was growing up in Iowa. 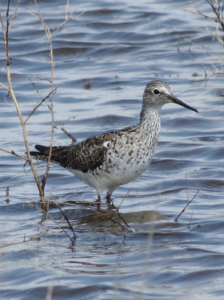 Tom told a story that really made his audience at the Audubon Center stop and think, and this was about a point on the journey of Christopher Columbus. Heading southwest across the Atlantic, the crews had not sighted land for ten long weeks. They were near mutiny. Then suddenly one sailor sighted a sandpiper. (One type, a Solitary Sandpiper, is shown in the photo at left.) Aware that they needed to rest around shallow waters, he knew that they must be close to land. A day later, they arrived in the West Indies.

“We are the sailors,” Tom said at the end of that story. The meaning is open to interpretation, I’m sure. However, it does seem that we have lost our way at this time in history, and perhaps we can save ourselves by attuning to the natural world the way Tom Taylor has. And by learning about it, as had the sailor who spotted the sandpiper, we may be able to find “land,” or safe ground. 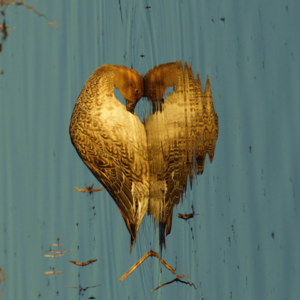 Words are wonderful, but Tom also left his audience with a very unusual and beautiful image, a photograph that was an unexpected and stunning reward for paying attention. And it certainly is a vivid representation of his encouragement to experience the “joy of engaging with the natural world.”

This is a photograph that Tom took of the Pintail Duck, a female, grooming her breast as she floated on the floodplains of the Bosque del Apache Wildlife Refuge in New Mexico. When he turned the photograph on its side, the heartfelt response to the natural world that birding had evoked in him became vivid.

4 Responses to “The Joyful Chasing of Birds”