“This living hand, now warm and capable of earnest grasping . . .”

I have returned to my “worry” book (What Should We Be Worried About?) for today’s topic. Yes, I promise that I will be done with it after today.

The focus is on essays by two women. As I wrote earlier, their interests throughout the book seemed more accessible to me than those of many of the men. Not always so scientific, you know. In this case, both wrote about the human hand.

Susan Blackmore is a psychologist, and Christine Finn is an archaeologist. Both expressed concern about the way human intellect seems to be distancing from the physical through declining use of our hands. In “Losing Our Hands,” Blackmore noted that every time we create a machine that usurps manual skills, we are foreclosing the interaction between brain and hand.

I need to look this up, but I think that the making of tools promoted the development of the human brain. Blackmore’s concern is that the more dependent we become on all our new machines, the less capable we become of surviving in their absence–should something happen, you know.

Then in “Losing Touch,” Christine Finn asks what the future of fingers will be in the Digital Age. “Now that the latest interface is a touch that is smooth and feather-light, and human-to-machine commands are coming to be spoken, or breathed, or blinked, or even transmitted by brain waves, will finger-work be the preserve solely of artists and child’s-play?” 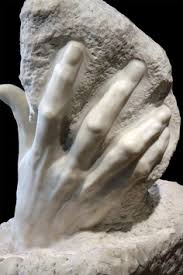 An interesting question, and I’ve been thinking about it for days. Am I imagining it or is it possible that a sense of rivalry with technology is beginning to develop within the human psyche? If so, the degree to which we continue to use our hands could be very important in winning an imagined contest.

On the other hand, pardon the pun, there are places  we may yet wish that machines could go. For example, I am very open to the possibility that a computer will someday scan and perfect teeth. However, early this week I was awed and very grateful for the hands of a new young dentist repairing a filling. He worked with extraordinary skill, deftly working numerous instruments and a mirror, his touch firm, considerate, and confident all at once. I have had many good dentists, but this one is unusual. How fortunate we are that this kind of manual skill flourishes among a wide range of medical experts, like surgeons.

And beyond our normal view, there must be all sorts of professions where dexterity has reached new heights. However, Finn and Blackmore were thinking about regular, everyday people. How much do we use our hands and what skills do we have away from the computer keyboard and the screen? It seems obvious that the range has radically diminished with the advance of civilization, and the loss is greatest among young people. The problem is that we can buy practically everything we need. We no longer need to make it.

I know many people who are very good with their hands in traditional ways. Among the women are very skillful cooks, quilters, knitters, needleworkers, gardeners, potters, carvers, and artists. The men can do all the things that go with hunting and fishing, and some know how to maintain and repair equipment, even rebuild vintage cars. Some are artists also and skillful with the land, growing things for the table. Among both sexes, there are those who build things and work with livestock.

They have many different kinds of hands, some scarred, calloused, and gritty under the nails; others well groomed. I hadn’t realized until I started writing this how much attention I pay to people’s hands. You can tell those that are competent, sensitive, and useful. Some, both male and female, are quite beautiful, and many women see their hands primarily as decoration. Good luck getting a flaky pie crust out of one of those.

Perhaps I notice in part because my own hands are not fancy. When I was young, the sister of a childhood friend once commented that I had the strongest hands she had ever seen. I remember looking at them and wondering what she was talking about. Maybe she said this because the blood veins are prominent. I use my hands a lot just taking care of things, which is why they never look fancy, and I don’t call attention to their homeliness with jewelry.

I have learned, however, that they have a certain intelligence of touch that works with animals. It has occurred to me that the human hand may have been a very important factor in the evolution of dogs from wolves. Food could have been a draw among wolves who began to hang around camps about 15,000 years ago. However, the evolution of the dog may have begun when wolves first felt the kind touch of a human, as in the skillful tending of a wound. Then came the wonder of a scratch behind the ears, the affectionate rub of a shoulder, and so on. The potential of the lap dog was born.

Here is where we get to the real nitty-gritty of an advantage technology will never–I’m pretty sure–match. I refer to the power of the attentive human touch.  Because I have long been interested in alternative medicine, I have encountered many times individuals whose hands reveal genius not only in the breadth of their understanding of human physiology but also in their ability to mobilize the body’s self-healing capacity.

And although outer space is well worth exploring, this inner universe may be just as vast and important in its own way. For example, it is a territory where computers may well monitor and record but never duplicate the achievements of true healers. In fact, there is really no telling what gifts lie within, as long as we stay in touch with our hands and through them our humanity.

Because it speaks to the tragedy of potential loss of this connection, I will end as I began with the poem, “The Living Hand” by John Keats.

Of earnest grasping, would, if it were cold

And in the icy silence of the tomb,

So haunt thy days and chill thy dreaming nights,

That thou would wish thine own heart dry of blood

So in my veins red life might stream again,

And thou be conscience-calmed—see here it is—

I hold it out towards you.

3 Responses to “The Living Hand”