How odd to remember a benefit of growing up in poverty.

I refer to a sharing by a beautiful and intelligent young Hispanic mother whom I tutored a couple of times last semester. I will call her Maria, and we reviewed a paper she had written on how social media interferes with child imagination.

In the paper she fondly remembered all the toys and games she and her playmates  had created, basically out of throwaway things. Now when she sends her elementary-school-age son outside to play, he wanders around aimlessly for a while and then wants to come in and be with her device.

Maria was frustrated and resentful, helpless to resist the tidal wave of technology that has radically altered lifestyles and at rising momentum. And Maria faces the challenge of finding a job that will enable her to meet the competitive demand for the latest and greatest new thing among young people the tech industry is now exploiting through the educational system.

Do I sound like a grouch? I am, in fact, feeling grumpy. Tuesday I was one of about 38% of voters In Santa Fe who tried to block a technology bond that will continue to levy property taxes for the school district’s $55 million, five-year Digital Learning Plan. Now, if you don’t live in New Mexico, this may not seem like a thing worth thinking about. However, the drive to invest heavily in classroom technology is a nationwide–even worldwide–phenomenon. I’m one of the people who question its effectiveness.

And this is not because I’m very, very old, as some readers might think. I may be more computer savvy than many in my cohort just because of this blog, and I greatly appreciate internet resources when I’m researching something. However, I think that a proponent of educational technology exaggerated a bit when he said that “The internet gives any student access to the sum of human knowledge.”

And some of us are resisting herding messages like these: “If you don’t want to make this investment it’s because you’re a Scrooge. Technology is the future; we have to prepare our children for the future, and schools must lead the way. And in addition, foreigners are taking all our good tech jobs because they’re better trained on computers.”

Our opposition camp can also imagine the strategy sessions launched years ago among the tech moguls:”Just think of all the money we can make by getting our computers and software into the public school systems. We’re talking billions here. And then when the children become proficient, they’ll want their parents to buy more equipment. So that’s another expanding market. Everybody in the family from age two on should have our products. And we can build in obsolescence so it all has to be replaced frequently. If we keep coming up with ‘have-to-have’ innovations, the demand will be endless. And then we can use all our products and software to ply users with ads. We’ll market not only our own stuff but charge other entities for ad space. Just think of the money!”

Well, in fact that has happened, so investors have been very, very happy–although the latest Apple and Yahoo news is a little creepy. But let’s go back to the education question where I started. Does technology in schools actually work? A person in New Mexico has to factor into this two points. One is that our students’ scores on these PARCC (Partnership for Assessment of Readiness for College and Careers) tests are at the bottom of states reporting. Another is that New Mexico is also at the bottom of the national barrel in measurements of child well-being. This relates to poverty levels, the struggle with a second language, and the lack of adult guidance. Computers are not going to fix that.

Internet research on the topic of school technology reveals arguments on both sides of the issue, but a BBC interview in September provided an international perspective that was very interesting. The subject was the findings of the Organisation for Economic Cooperation and Development (OECD) through a test called the PISA. It is administered to 15-year-olds every three years to assess scholastic performance in mathematics, science, and reading. (The OECD is an organization of 34 democracies with market economies that work with each other, as well as with more than 70 non-member economies, to promote economic growth, prosperity, and sustainable development.)

Andreas Schleicher, director for the Directorate of Education and Skills at OECD represented the findings relative to school technology. To summarize, he said that it has raised “too many false hopes.” Here are the particulars:

1) The PISA tests results from more than 70 countries indicate that education systems that have invested heavily in school technology have seen “no noticeable improvement” in test results for reading, mathematics or science.

2) Student performance is “mixed at best” in spite of annual spending of approximately $25.5 billion.

3) The countries with the lowest use of the internet in school (South Korea, Shanghai, Hong Kong and Japan) are among the top performers.

4) Among the seven countries with the highest level of internet use in school, three (Australia, New Zealand, and Sweden) experienced “significant declines” in reading performance.

5) And in conclusion, Mr. Schleicher found that the “socio-economic divide between students is not narrowed by technology, perhaps even amplified.” He concluded that making sure children have a good grasp of reading and math is a better way to close the gap than providing access to “hi-tech devices.”

The reasons why nations differ in scholastic achievement are complex, of course, but research also revealed some down-home points of great interest. One was an interview with Steve Jobs in 2010 in which he said that he limited his own children’s exposure to technology. A few weeks later, The New York Times  broke the news that Silicon Valley executives were sending their children to a Waldorf School, which severely restricts the use of technology. Schools can vary their policies somewhat but here is one example of media policy:

Waldorf education has long been grounded in the belief that media exposure is counterproductive to the development of imagination and the ability to entertain oneself, especially in the younger grades. While we know that most families have some media as part of the home experience, we encourage families to significantly limit or discontinue exposure to television, movies, video games, computers and other entertainment media. At the very minimum, we expect families to maintain a no-media policy during the school week.

So if Silicon Valley executives want media exposure severely limited for their children, perhaps the general public should take note. I liked one summary of the Waldorf advocates attitude about technology. They’re not opposed to it, they said, “but there’s a time and a place for everything.” The time seems to be later rather than sooner. And I hope the entire nation will revisit this issue, sooner rather than later. 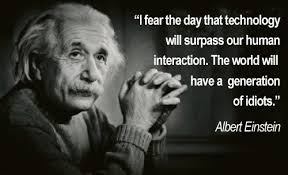 3 Responses to “The Media Toll on Education”