How great that in 1969, America was the first country to leave a footprint on the moon. But after 50 years, could it be time to commit to a different kind of ambition that would make us even more proud?

This question arises from comparing the present with the landscape of the past. We are living in a time of political and social turmoil very similar to that of 1969. The Vietnam War had endured for four years by then, and ours in the Middle East has gone on for 16. For us, potential intensification looms on the horizon due to conflict with Iran.

The recognition of repetition in history can be frustrating, even depressing. However, there is hope in the fact that humans, especially our men, have this pioneering spirit that wants to go beyond what is. This has classically involved adventuring beyond the familiar ground of existing knowledge and space. Can it be, however, that the time has come for all of us to turn and focus on “home” to re-think the terms of national achievement?

I get that personally–I mean the need to get re-inspired. I published my last blog almost two months ago on the threshold of a “downsizing” move to a charming little cottage not far from the capital in Santa Fe. My timing was perfect and the transition advanced rapidly. I always find a move stimulating. Since graduating from college, I have had 25 different homes in eight states, D.C., and one foreign country, and this is my fifth in Santa Fe. However, this move was different.

Age is a factor, and downsizing has connotations that are taxing. On top of that, I came down with a flu virus that had not been anticipated by the vaccine. I stayed on my feet, but I’ve never had such a deep and juicy cough or so much congestion. A friend suggested that I was undergoing a “cleansing,” a clearing. I liked that idea. I was ready for a new literary trajectory, let’s say.

The flu dragged on, though, and as I tried to haul myself back up into the saddle to “write” off into the future, I had no idea where to go. The landscape of possibilities looked drab–until the Moon came up beyond the horizon.

As we all revisited America’s moment of glory back in 1969, memory was enriched by many articles on the history of our space flights. And it’s natural in the moment to want our scientists and engineers to continue to excel in this field. After all, their peers in China, India, Japan, Russia, and even Israel are also engaged in exploration.

Among all the articles were those touching on the “resources” on the Moon that might be exploited. These include helium-3 that could be mined for fusion reactors and also water that could supply spaceships flying to Mars. These possibilities made me feel sort of sad. This would create further evidence of humans making messes wherever we go.

For example, NASA has cataloged 765 man-made items that American missions left on the Moon. No big deal, right? It’s a big place. And so is space, but as space flights go back and forth to the moon, they will initially have to navigate over half a million pieces of junk orbiting within about 1,250 miles of Earth. (The Moon is about 240,000 miles away.) Again, no big deal, right? Humans are messy. We’ve always been messy.

That’s a depressing fact, though, when we need inspiration in the moment. Suddenly I found it in a different kind of article about the Moon. Written by Shannon Stirone, it included examples of the ways in which the Moon has inspired artists. Titled “The Moon as It Has Lived in Our Imaginations,” it included an 1897 painting of “The Sleeping Gypsy”  by Henri Rousseau. I recognized the image but suddenly also realized an extraordinary and meaningful connection with a recent experience. Back to that later.

Stirone’s article was about the human fascination with the Moon that must have been with us from the beginning of our history. I found the imprint of that fascination in 855 quotes via Goodreads. There I was reminded of how often, even among men, the Moon has been associated in imagination with the feminine. This includes Oscar Wilde in describing “The Moon in her chariot of pearl.”

Another quote touched on the need for a new turn in human ambition that I was feeling personally. This quote was by French-Cuban American writer Anaïs Nin: “We are going to the moon that is not very far. Man has so much farther to go within himself.”

Of course, there is that use of the word “man” to encompass all of humanity, but we know who has been running the show. No criticism is intended, just the idea that humans have unfulfilled individual potential in mind and spirit to pursue on Planet Earth. And with the feminine seemingly beginning to rise toward full in a way, perhaps the landscape of possibility will brighten. 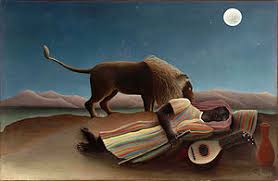 Now back to “The Sleeping Gypsy,” an image that my mind’s eye immediately connected with a book, a memoir, I had just read. Published this year and written by a woman who lives here in Santa Fe, it seems extremely timely to me. If we as a nation are standing on a threshold where we will decide to continue down a path of history perpetually repeating itself or where we will make a bid for transformation, this book may play a significant role in inspiring the latter.

And I will close on that point. I hope you will return to hear more about this idea in my next post.

3 Responses to “The Moon Rises Anew”