I will definitely wave. We are now friends.

There are many things that make Santa Fe a colorful and charming city, including the men who sell the New Mexican at certain intersections. For example, there is the guy at Zia Road and St. Francis who will give away a paper if you can answer a trivia question posted on a bulletin board. Then there is the comic with the funny hats at St. Francis and Paseo de Peralta north. But best of all is John O’Donnell.

John, who works at the corner of Guadalupe and Paseo de Peralta north, is a character who invites fascinated study. Small and wiry, wispy hair emerging from a cap covered with souvenir buttons, he always dresses in some form of cargo pants, every pocket under bowed legs stuffed with brochures and notebooks and mysterious reading material that must be hard on his bad eyes. 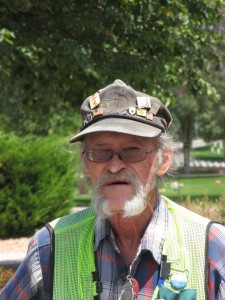 He wears a chartreuse safety jacket adorned with many clips of graduated size, buttons with messages (“Yes, I’ve heard about decaffeinated coffee. So what’s your point?”), and a pocket full of ballpoint pens. He carries a backpack that must be loaded with essentials for survival, even though he will catch a bus home sometime between 2:00 and 4:00. He is out in the weather, any kind of weather, and he looks tough enough to endure the worst that global warming can dish up.

We sat down with coffee and a slice of pizza in De Vargas Mall today, and he told me his story. He has been selling in the downtown area for 25 years and eight-and-a half months. (He is very good at dates and numbers.) He is 67, but his challenging life has taken a toll, and he looks older.

John was born in Stoneham, Massachusetts, and he and Hillary, his wife of 30 years, came to Santa Fe via Colorado. When they arrived here back in 1985, they camped out in Hyde Park for a year and a half. Then he got jobs with the newspaper and Mo’s Ribs, which was replaced many years ago by Cowgirl BBQ. Now John only sells the newspapers.

The business goes like this. The formula is complicated, based on different sales levels for each weekday, but he pays about $23 per week for a total of 220 newspapers. Friday is the big sales day because the Pasatiempo comes out, which includes all the entertainment for the upcoming week. He gets 80 papers for that day as opposed to 35 on all the other days. On his own initiative, he stuffs every Wednesday paper with the Reporter, which he picks up from the Sunflower Market.

A van picks him up in the morning and delivers him and his papers to his spot. He keeps whatever money he makes and returns the unused papers, which are recycled. He has never had a vacation since he started, and I doubt that he has ever been too sick to work.

He is exasperated by the fact that beggars have been taking his spot on the weekend, sitting on his crate, which he has secured with a cable, and holding up a plaintive message on a piece of cardboard. “They’ve never worked a day in their life,” John says disgustedly, and he has to clean up after them. Mondays are the worst, and he collects whole bags of trash and syringes by the handful. It’s better lately, he says, because the police have been cracking down.

Every year John and Hillary create a Christmas card composed of photographs of their cat, Buddy, and he takes them all over town and gives them to all the people he knows—multi-generations of the same family in some cases. Last year he passed out 258 cards. He gave me one several years ago when he was on Grant Street, and I wish I had saved it.

I get the paper delivered at home, but I may buy one from him every now and then. I will definitely wave. We are now friends.

One Response to “The Newspaper Man”