Funny how you can get attached to an insect. I’m referring to Herbert, the pumpkin spider.

I’m not sure when I tuned into Herbert. He lives in my garage and has made his home in the alcove where my Can-O-Worms composting bin sits. I immediately recognized him as a pumpkin spider because I learned about that species several years ago when one caught my eye outside a bedroom window.

The pumpkin spider belongs to a category of spiders called orb weavers of the family Araneidae, of which there are over 3,000 species worldwide. Their webs are round, and I read that the orb evolved from the horizontal web about 136 million years ago. How in the world do arachnologists know that? 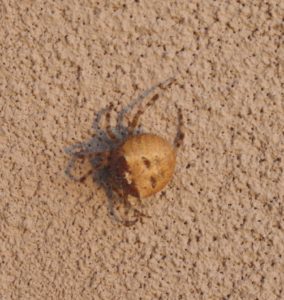 I guess they’re called pumpkin spiders because they become most active in the fall–pumpkin time, you know–and because they are kind of orange-colored. The variation ranges widely, and Herbert is a dark rust. You can see in his predecessor to the left the markings that evoke a pumpkin, but I haven’t looked at Herbert closely enough to see if he is similarly decorated.

Herbert was smart to have homed in on the composting bin, because there are many fruit flies around it, a steady source of food. He built a big web connecting the bin to the wall to maximize his catch. I was grateful for his help in controlling the flies, and I let him be. Well fed, he kept growing, and soon he was a big dude, more than an inch across when fully extended.

He was also very industrious, replacing the web frequently, and sometimes I would see him with a big bundle of it between his legs.  As I understand it, they eat the web and then reweave it at night. They travel on the smooth spokes to feed on the flies caught by the sticky, circular strands.

Admiring the engineering and complexity of the web, I wondered if it had also caught the eye of early humans—women in particular. Perhaps it had inspired them to weave baskets out of grasses at first and then move into making textiles with wool yarn.

Every time I added garbage to the worm bin I was very careful not to disturb Herbert, but there were times when I couldn’t help it. He would just recreate the web, but he seemed to be experimenting with how to attach it to the bin so that moving the lid wasn’t dangerous.

Maybe Herbert eventually relaxed, got a little accustomed to my coming and going and trusted in my effort not to disturb him. If I did bother him, he would bunch up, so I apologized. I worried a little bit if he was lonely, if he missed the sun in the dark garage.

Greeting him coming and going became part of my daily routine. When I drove into the garage with my headlights on, he cringed, so I began to turn them off before the door went up.

As the fall deepened, I wondered how long he would live. The earlier pumpkin spider had died with the first freeze, but this year has been especially warm; and after all, Herbert is very well protected in the garage. In the winter, I always bring in a small space heater to keep the worms warm.

Everything was fine for a while, but as big as he is, Herbert was still not able to eat all the fruit flies. Things began to get messy. Other spiders were gathering around the bin and creating clotting, unstructured webs. Plus, Herbert did need to use the toilet. You don’t notice this out in nature, but little black spots were accumulating. They immediately dissolved under a wet rag, but I was getting restive over the look of things. The big dude seemed to be taking up more than his share of the space, as men sometimes do.

And then came the observation of sister Kate. A bug person from the time she was a child, she well understood my growing attachment to Herbert. She was probably reluctant to address my fantasy about him, but one day she suggested that he might actually be female.

When I proceeded with some research, my world shifted on its axis, a world constructed on some basic assumptions about the differences between males and females. Males are bigger and they like to build things, create things. They’re good at engineering. They kill things. They’re adventurous, pioneering, and natural leaders. They’re survivors, sometimes loners, and opportunists—as in recognizing the dietary goldmine of a worm bin.

The male has always been symbolically bigger in my mind in ways that seem to demand deference; and, of course, I’m not the only human who has thought this way. Civilization, or what currently passes for it, has been profoundly influenced by associated assumptions. But a new truth shot up on my computer screen: In the universe of spiders, the female is the big dude, in some cases many times bigger. But why?

I read that this has been a disturbing question since the time of Darwin.  Some biologists rationalized the size superiority, let us say, of the female by speculating that this enabled her to lay more eggs. But then recently–meaning in the last 10 years or so–an alternative idea has been proposed that makes the males look very intelligent in restricting their size. 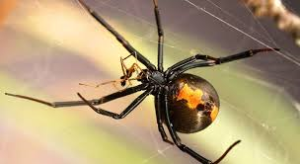 It has been discovered that they do this thing called “bridging,” in which they fling a thread out to some kind of support, a little like the long arm of a monkey traveling from tree to tree. Because they’re tiny, the male spiders can travel the thread–presumably to seek out females to mate with. This sounds good until you also learn that the females often eat them after mating. Now you can understand more fully the reason for the axis tilt.

Maybe my subsequent mental destabilization accounts for the evening I bumped the worm bin harder than usual. Apparently, it was the last straw. The irritated creature I had known as Herbert headed for the ceiling. It seemed symbolic of the cosmic ascension of the feminine, which is afoot even as I write this. I think of this every day now as I come and go.

It is now Bertha, not Herbert, far above my head in a new and efficient web, safe from my clumsiness, comfortably warmed by the heater, perhaps secure in the knowledge that she may live many more months. Perhaps a little bitty male will find her up there next fall, the usual mating season; but in the meantime, she can just relax and enjoy her elevated view. I feel empowered by the newfound knowledge about her presence. No telling where this will lead.

4 Responses to “The Orb-Weaving Oracle”