It is time to return to the Garden.

“Exploration really is the essence of the human spirit.” I was cleaning my computer keyboard with a damp Q-Tip as I thought about this statement. It’s not exactly true, is it?

I’m back to the “Pathfinders” chart in National Geographic on which I wrote my last post. The quote that introduces this chart is by Apollo astronaut Frank Borman. As I polished up my keyboard, I considered that he was actually referring to the essence of the masculine spirit or to the spirit of some exceptional men or to the spirit of a few extraordinary women. The more you drill down, the less true the statement becomes.

The fact is that when men comment on mankind in an admiring way, they are usually thinking of their own heroic values. “Hold on,” I want to say. “You are not we. We are always the ones waving our hankies from the shore as your ships set sail for adventure.”

There is a key on my number pad that is relevant to this issue. It was chewed by an adventurer mouse almost exactly a year ago. (See “Oracle Mouse” in the Nature category.) I met the mouse personally, and the encounter was freighted with significance.

I had been kind of freaked out by the droppings that seemed to signify a mouse invasion of my home and had gone to the hardware store for traps. I specified a humane trap, and the clerk recommended that I bait the little boxes with Snickers.

The mouse was clever. I heard the traps clatter in the night, but they were empty in the morning. The next night the mouse got stuck in a trap on the kitchen counter, and I picked it up and set off for the ravine across the street to set it free.

There was a brief moment when the mouse dangled from the trap and I saw the little pink testicles. Ah, the adventurous male explorer mouse. He was a fine, sleek fellow indeed, and there was this brief, unforgettable moment as I squatted down beside him when his black eyes locked with mine.

I read a bold spirit in those bright eyes as he studied me apparently without fear. It was I who turned away first, and I wished him well as I headed back to the house. A Marco Polo mouse, and there has been no other since. What he found tasty on the number four key will always be a mystery, but I have decided he was on a mission.

There is probably something essentially feminine in the fact that I chose a humane trap and released the little guy back into the natural world with a feeling of respect. Perhaps it is time to go a little deeper into the feminine psyche to articulate such values that should be more prominent in these troubled times.

As I wrote earlier, we’re running out of unexplored terrain for the male adventurer, and things have gotten so messy, so polluted and mined and excavated and bombed out on planet earth, that Mars looks like the next exciting frontier. Symbolically speaking, the ladies will again wave our hankies to the astronauts in farewell. Then we will stop staring up at the sky, turn around, and head for home. Time to clean it up. 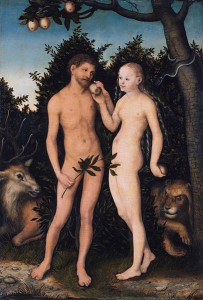 Adam and Even by Lucas Cranach the Elder

My mystic, master-landscaper friend, Elizabeth Robechek, and I have discussed this before. We are both very attuned to nature, and we have separately gravitated toward the idea of the need for humanity to “return to the Garden.” Of course the biblical story is that mankind was ejected from the Garden of Eden because of us, “the cutletsized consort,” as James Joyce put it. How appropriate, then, that we should lead the way back.

I’ve actually been thinking about this since 1998 when detail about the atrocities in the Bosnian War began to come in. The idea then was that the feminine needed to intervene to stop this kind of thing. This would involve the development of principles of leadership that would prepare us to play a larger role in governance.

These principles would apply not only to home and family, neighborhood, city, state, region, and the United States but also to the world at large. There is no point in thinking small anymore. My next post will launch the discussion of such principles. I have four—as suggested by the Marco Polo mouse—that I would like to submit just to get the conversation going.

I would also like to propose a companion statement to the one by Frank Borman. This is from my perspective, of course, a feminine perspective. Here it is: “Taking care of home is the essence of the human spirit.”

2 Responses to “The Other Essence of the Human Spirit”