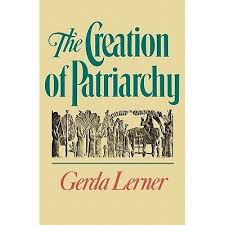 “Women’s history is the primary tool for women’s emancipation.”

I haven’t posted a blog for almost a month, but nothing bad has happened. I’ve just been thinking, trying to figure out what to do with what I’ve learned since writing my last post on the status of women. Following up with further research, I came upon a book published in 1986 titled The Creation of Patriarchy by Gerda Lerner. I have never been so affected, so disturbed by a trail of history.

Gerda Lerner was an Austrian-born American professor who established the first PhD program in women’s history at Sarah Lawrence College in 1972. She was also a driving force behind the establishment of women’s studies programs in colleges and universities all over the United States. As of 2017, there are 326 such institutions. After a very distinguished academic career and the publication of eight books, Lerner died in 2013 at age 92.

Her deeply researched work on patriarchy covers its development from about 3100 B.C. to 300 B.C. It’s not as though I didn’t know any of the detail; I had just never put it together to understand how the conventions of patriarchy had affected my own life. Suddenly it seemed that reality as I had known it shifted, and the harsh truth became visible.

There were times when I got so upset in this reading that I had to take a break for a day or two. As I learned about the ways in which the subordination of the feminine was initially enforced, I couldn’t help but wonder, “Why did men hate us? What were they afraid of?” However, way back in the beginning, perhaps the inner life we take for granted did not exist and a wife as a form of property was as emotionally evocative as a tent or a donkey.

Lerner’s history tracks the “commodification” of the female. This included her person, which could be bartered for economic gain and valuable alliances; her sexuality, which could be prostituted at will; and her capacity to breed children for labor and advantage in numbers.

In the deep past, there had been goddess religions that honored the female as the source of all life. However, as the masculine ascended in power, men began to imagine companion male gods. Eventually all were displaced by the institution of a supreme, essentially masculine, power.

In Genesis 17:7, this deity blessed man’s “seed,” formally demoting the womb to “passive receptacle,” as Lerner puts it. The feminine role in procreation proceeded to decline in importance until it reached a new low with Aristotle in Greece in about 300 B.C. Supposedly one of the greatest thinkers of all time, he consigned the feminine to the status of a “multilated male.” As though that were not enough, he also asserted that “the male is by nature superior, and the female inferior; and the one rules and the other is ruled; this principle, of necessity, extends to all mankind.”

On reading that paragraph, I got so mad that I had to get up and walk around. 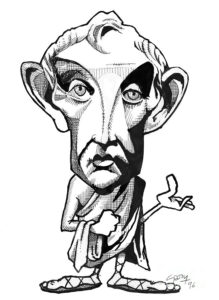 Caricature of Aristotle by Gary Brown

One knows that this idea is still out there, greatly diminished though it may be. And how is it that we have put up for thousands of years with its manifestations, subtle through brutal? Lerner explains that, because women were so disempowered, we naturally turned to men as protectors and providers. In that way and through other forms of adaptation, we became complicit with the patriarchy. Up to a point, anyway.

Memories that surfaced in the course of reading this book reminded me that, like beads on an endless string, experiences with patriarchy have recurred throughout my life–including in recent emails with conservatives. With the reading of Lerner’s book, however, I have begun to feel urgent about the need for transformation. I don’t know how long this will take, but there’s one thing I know for certain: Women are not inferior; we are different. And the world desperately needs to see more of some of the ways in which we are different.

It is also comforting that Gilda Lerner saw transformation as inevitable: “The system of patriarchy is a historic construct; it has a beginning; it will have an end. Its time seems to have nearly run its course–it no longer serves the needs of men or women and in its inextricable linkage to militarism, hierarchy, and racism, it threatens the very existence of life on earth.”

2 Responses to “The Patriarchy on Notice”