All I wanted to do was learn more about petroglyphs. I didn’t know that I would end up with a quandary.

Let me begin by acknowledging that I am impaired in this matter by the lack of signficant knowledge about art in general.  As a result, I have asked my brother-in-law, Paul Karlstrom, who is a distinguished art historian, to weigh in with regard to my issue. I am looking forward to the possibility of a comment.

My primary guide in the matter of petroglyphs is Polly Schaafsma, an archaeologist and research associate in the Laboratory of Anthropology, Museum of New Mexico, here in Santa Fe. I don’t know her personally but have two books sharing her knowledge. One is Indian Rock Art of the Southwest (1980). The other is Images in Stone (1995), a collection of spectacular photographs of rock art by David Muench for which Schaasma wrote the introduction and other text.

As I studied the books, I quickly realized that anything I wrote would be very superficial. This was due not only to my limited knowledge but also to the need to summarize the main points Schaafsma made covering thousands of years of evolution.

The quandary at the core of my emerging perspective had to do with deep time. In the second book, Schaafsma said that we can be pretty sure rock art in America began about 4,000 B.C. What was making me squirm as I studied was the memory of rock art images created about 30,000 years earlier in Europe–France, to be exact. Those memories were tempting me to compare and judge to the detriment of the American work.  I knew that wasn’t right, but I’ll get back to that later.

There is rock art in many places in this country, but it is best preserved in the arid states of the Southwest. The two primary types are “pecked” and painted. The pecking was done with a stone tool, direct strike eventually yielding to angular force that was more versatile. This was often done on surfaces with a dark patina and lighter colored stone beneath. The colors for painting were created by mixing water and minerals. 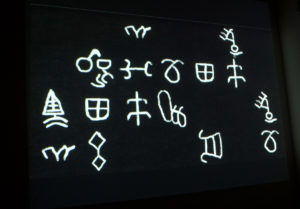 Schaafsma divided the work between “abstract” and “representational.” The abstract work, which was the earliest form of art, comprised simple designs and symbols. The representational included human figures as well as creatures like birds, insects, snakes, lizards, and the very popular bighorn sheep below. 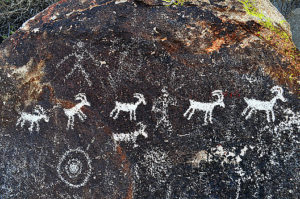 THE ERA OF THE HUNTER-GATHERER

Most of the rock art was created in the hunter-gatherer era that ended in about 1 A.D. Shamans were the spiritual leaders and healers at this time. Their bodies were triangular, eventually garbed in elaborate costumes with headdresses and jewelry. 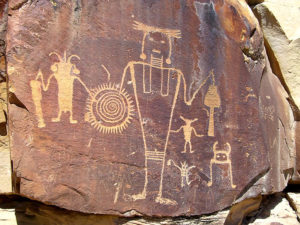 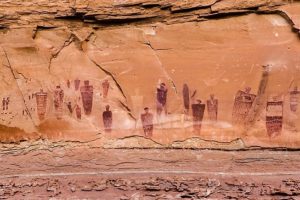 Artists also began to paint images in sheltered places, and there seemed a new sophistication in mysterious figures like those below seeming to emerge from the walls of Horseshoe Canyon in Utah.

This work developed where people were congregating socially, ritually, and spiritually. Schaafsma wrote that wherever these gatherings were happening, different cultures were developing different styles of image-making. She explained that the art served to “communicate myths, stories, cultural values, and abstract ideas from one generation to the next.”

In spite of the different styles of image-making, and even though cultures were developing hundreds–even thousands–of miles apart, there were also similarities in the rock art nationwide. It brings to mind that saying, “We’re all connected.”

Unfortunately, I couldn’t seem to help getting into that place of judgment as I studied some of the images. They reminded me of grafitti, crude and disorganized symbols often imposed on top of each other. As Muench’s photography revealed, they sometimes seemed to deface a beautiful landscape.

I fully understand the value of this work as artifacts and am just as supportive of preserving them as archaeologists like Schaafsma, who wrote that “Every effort needs to be made to protect this diverse record of past ideologies and cultures from vandalism by individuals, and complete destruction in the name of economic and industrial growth.”

The questions bothering me were “What is art?” and “Is this really art?” The first definition of art in Webster’s Dictionary is “human ability to make things; creativity of man as distinguished from the world of nature.” That’s way too broad, isn’t it? And I was also troubled by the knowledge that these indigenous people would eventually be renowned for exquisite basketry, weaving, pottery, jewelry, etc. There was no genetic shortage of creativity, but it seemed as though it were not being fully accessed.

So had the culture the communities were developing imposed constraints? Was there something afoot, like “These are the symbols you are limited to. This is the way we do the sun. Shaman shoulders are always wide; use stick figures for other humans. Bighorns can look real, but a lizard looks like this.” All of us are shaped and limited to a certain extent by the conventions of our culture, and this may have been a factor way back in the time of petroglyphs.

I wondered about this in part because of the French rock art I mentioned earlier. It was created around 32,000 B.C. in Chauvet Cave. To my mind it seemed–and I kind of cringe at saying this–vastly superior. The material used for drawing was probably the soot from torches that would have been necessary to create enough light to work. 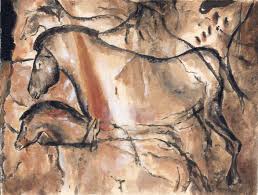 Brother-in-law Paul says that “great art has the ineffable aesthetic power to fully move the senses and emotions.” That was what I was missing in the American petroglyphs–aesthetic power. And how odd that it was visible in the drawings in Chauvet that had been created more than 30,000 years earlier. What a puzzle.

In the Chauvet Cave there are beautiful and dynamic images of bison, panthers, bears, rhinoceroses, and even hyenas as well as horses–but no humans as far as I know. Why not? What was the purpose and who were the artists, and how did they sustain such talent so long? We’ll probably never know, and I will focus for the time being on petroglyphs in New Mexico.

THE EVOLUTION OF PETROGLYPHS 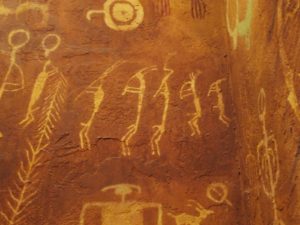 As the era of horticulture developed, the images of shamans yielded to those of the Kokopelli and Kachinas. As Schaafsma put it, the humpbacked flutist called Kokopelli was a symbol of fertility, and the Kachinas were “supernaturals” that mediated between the Pueblo people and their gods for rain. 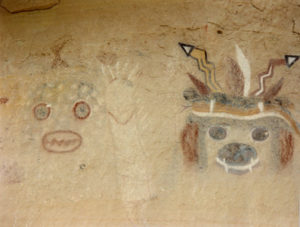 Perhaps I’ll write more on this, and I think it will be good to go out “on site,” so to speak, and see what the rock art evokes. I like what Schaafsma wrote about how its surfaces are “altered daily and seasonally by dynamic shifts in sunlight and shadow and rain or snow, which provided a uniquely dramatic, constantly changing theater for this landscape art.” This sounds like man-made images and nature are working together to create art. Something to be experienced, as well as seen. My senses and emotions might actually be moved. We’ll see.

6 Responses to “The Petroglyphic Challenge”