“God’s eye is in the sparrow, and I know He watches me.”

There was more kind of sad animal news in the newspaper yesterday, and it made me think of the power for good a preposition could have.

But back to the story that was reported in The New York Times. It outlined an issue affecting zoos worldwide, which are responsible in part for saving many creatures from extinction. The challenges zoos are facing is how to manage their populations. Do you let females experience parenthood and then euthanize the weaned, or do you manage pregnancy through birth control?  The issue makes the heart feel tired.

It also reminded me of a song sung by the gospel singer Mahalia Jackson that I heard many times growing up. There is a line in it that goes like this: “God’s eye is on the sparrow, and I know He watches me.” It must have been very comforting idea to people trying to endure slavery and then racism.

But suppose you change the preposition so that the words go like this: “God’s eye is in the sparrow, and I know he watches me.” Now the song suggests that we are known to God by the way we treat even the humble sparrow. There is also the hint of a threat: “This is my sparrow in which I am well pleased. Harm it and I will . . .”

I tried to find a reference to the sparrow in the Bible and found nothing pertinent. I did find a phrase by poet Alexander Pope (1688-1744) that relates as follows:

“Who sees with equal eye, as God of all,

I wish somebody really famous would change the preposition in that gospel song and popularize it worldwide. It would certainly complicate things–as in research labs–but it might accelerate the changes already afoot that have been fueled by human compassion for all living creatures. 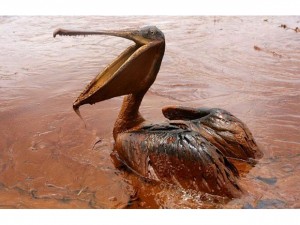 And now my mind goes back to one of the tragic images of wildlife sickened by the BP oil spill back in 2010. The news media frequently replayed one of a lone pelican, still afloat, suffocating in crude, great gobbets of oil dripping from its beak. It seemed to be in shock, but the eyes continued to open and close on the vision of a hellish catastrophe. It would have been unnerving to imagine God seeing us through the dazed eyes of that pelican.

Whether we do rightfully have dominion over every living thing is open to question, I think. But if we do, surely we have had enough experience with the dark side of authority by now and will continue to try to do better. Just think of the potential power of the revised preposition: “God’s eye is in the sparrow, and I know He watches me.”

5 Responses to “The Power of a Preposition”