First published in 2013, a book of essays by an Indigenous writer is soaring on a The New York Times list of bestsellers. What’s going on?

THE SEEDING OF AN IDEA 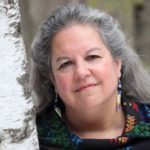 The book in question is Braiding Sweetgrass, and the author is Robin Wall Kimmerer, PhD. She is a decorated Professor of Environmental and Forest Biology at the State University of New York and a member of the Citizen Potawatomi Nation.

In her preface, Kimmerer says that the fragrance of sweetgrass, braided for ceremonial use but also to make beautiful baskets, causes one “to remember things you didn’t know you’d forgotten.” As I read one essay after another revealing Indigenous wisdom, I wondered if the content represents an opportunity for readers like me not to remember a conscious connection with the earth but to create one.

My reading of Braiding Sweetgrass was inspired by a tiny column in The New York Times Book Review. After reading six fascinating chapters, I paused to scan the index, and one title, “The Three Sisters,” caught my eye. Readers may remember that this term figured in my previous post. The Three Sisters are corn, beans and squash; and I had related an experience with planting them in a bed in front of a big barn at sister Kate’s country place. The planting was my idea, and I didn’t do any research beforehand so we enjoyed only mixed success.

The corn ears kind of pooped out after a while, and we harvested about one good bag of beans. However, the yellow squash overwhelmed us with its abundance, maybe because I brought two sprouts acquired at a nursery rather than planting seeds.

Through Kimmerer’s essay, I belatedly learned how reciprocity figures in the ability of the Three Sisters, growing near each other, to produce more food than each growing alone. And for millennia, women from Mexico to Montana have planted the three in one mound at a time, each mound one square foot in area. I now realized that I would have benefited from Kimmerer’s description of the stages of their development summarized below.

Planting begins in the spring, of course, and the seed of the corn sister is the first to germinate.

As the growing season continues, the corn may grow eight feet tall, ears angling a little away from the stalk. Her height allows the climbing bean to escape “bean predators” below. Bean buds produce clusters of fragrant flowers that turn into hanging bounty. The squash, the baby sister, is now free to choose her own path as she moves away from her siblings to produce offspring that will lie on the ground.

Kimmerer concludes her description of the symbiotic relationship among the three sisters with an analysis of the special role of the bean. She fertilizes them all by transforming nitrogen in the air to a usable nutrient. Rhizobium bacteria can do this, but it needs an oxygen-free environment, something like a lab, in which to work. The bean provides this in the form of a nodule, and this enables the bacteria not only to produce the nutrient but also to share it with the bean while leaving enough in the soil to fertilize the corn and squash as well.

Of course you noticed that I used the pronouns “she” and “her” instead of “it.” Kimmerer shows how the indigenous way of imbuing the natural world with spirit and consciousness awakens respect and compassion. Instead of an “it”, everything is known as an animated being with intelligence other than our own, whether a bear, an oak, a rock, or a stalk of corn.

Kimmerer wrote how she has seen the interplay among the Three Sisters in human families,  including her own presumably, since she has three daughters. That comment inspired me to think of the three Heath sisters in a very different way.

Like the corn, Ann was the oldest and the tallest among us at 5’8″, and she achieved even greater height in toe shoes through her passion for ballet. She was a leader academically as well, a high school valedictorian, the first of us to attend Stanford University where all three would eventually graduate with degrees in English. She spent 33 years as director of publications for the Fine Arts Museums of San Francisco, with height pertaining to her last four years in her office in the tower of the de Young Museum.

I was like the bean among us, trying to climb up Ann’s stalk by copying. I was 1/4″ shorter, however, and couldn’t remember what to do with my feet in ballet class so made the tennis team instead. I didn’t make valedictorian, earning only magna cum laude instead of summa because I got a “B” in typing one year. (I’ve never been good at things mechanical.) Like a bean vine, I rambled professionally but never found a permanent stalk to cling to. As far as making fertilizer goes–no, not that kind–I like to think that my writing adventures were occasionally stimulating.

Now to “little sister” Kate, who, like the squash, sprouted latest of all–four years after me. Being shorter (5’4″), she has also lived closer to the ground like the squash does. She too was a high school valedictorian and graduated with distinction from Stanford. After that she worked for the Adams Papers in Boston for two years. She transcribed handwritten, archived documents associated with John Adams, our second president, who is known as a Founding Father, (a ground-level role) in America. We did finally plant an acorn squash seed on her property, and it took off in a unique way, stem moving rapidly toward the road beyond the fence, many acorns ripening along the way. Kate’s journey far afield from her English major eventually led to a very successful career as a software consultant.

So there you are, my awakening as a human to a dynamic shared with the three vegetables when planted together. Shopping for them in the produce section of the grocery store will never be the same. And I look forward to the possibility of having fun by creating a more successful community of the three next year.

That was quite a detour, wasn’t it? And I haven’t done justice to Robin Kimmerer’s book, which I expect will inspire at least one more post as I progress with my reading. It has already had a very powerful effect on the way I see the world, and I hope this post will help support its soaring sales (from No. 14 to No. 5 since mid-November), which suggest that other people are having a similar experience.

Something very important is afoot, and an anecdote comes to mind. One day a Cherokee writer gave Kimmerer a corn husk bound like a little package and told her not to open the gift until the spring. In remembering the moment when she later found three seeds within, Kimmerer wrote about knowing that she held in her hand “the genius of Indigenous agriculture, the Three Sisters. Together these plants—corn, beans, and squash–feed the people, feed the land, and feed our imaginations telling us how we might live.”

Time to think about that indeed.

6 Responses to “The Rise of Indigenous Wisdom”