One of my most important childhood memories has to do with the Bible story of Abraham and Isaac. 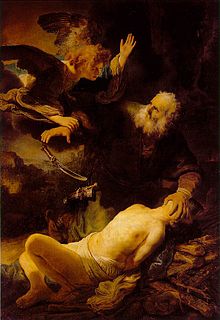 Abraham and Isaac by Rembrandt

The setting was a summer afternoon in our backyard in El Paso. I was reading to my sister Kate, who is four years younger, from a collection of illustrated Bible stories. It had recently come to us from an aunt who often sent the four Heath children wonderful books.

The story was probably related in very simple language, and when I got to the part where God orders Abraham to kill his own son to test his obedience, I reacted indignantly: “This can’t be right!”

The kitchen window nearby cranked open. “Ellen,” my mother said in a warning tone.

My family wasn’t religious, so I think my mother was just alerting me to attitudes beyond our fence. This memory has come up because the story is mentioned in another book I just finished reading, Why Does Patriarchy Persist? I guess I should begin with the definition of patriarchy: a system of society or government in which the father or eldest male is head of the family and descent is traced through the male line. It is a system in which men hold the power and women are largely excluded from it.

In their book, authors Carol Gilligan and Naomi Snider explore the psychological as well as political forces that sustain patriarchy. The story of Abraham and Isaac is referred to in the introduction, and it may represent the foundation of this age-old system. (Abraham is an important figure in Judaism, Christianity, and Islam.) The work began on this book in 2016, right after the election of Donald Trump. He seems to represent the classic advantages of patriarchy as engendered through wealth, status, and power.

The structure of patriarchy is “binary” or of two parts, as in “If you are male, you do this; if you are female, you do that.” Gilligan and Snider make it clear at the outset that they do not believe this is “natural” or that it has endured simply due to masculine reluctance to relinquish status and power. Their book is about a further explanation, and they certainly have the standing to be heard.

Carol Gilligan, age 82, is a renowned feminist, ethicist, and psychologist with a PhD in social psychology from Harvard University. She is a professor at New York University (NYU) and a visiting professor at the University of Cambridge. Naomi Snider is an attorney and a research fellow at NYU. She is co-founder of a Radical Listening Project there, whose goal is, through attention to voices not our own, to find a way to mitigate rising racism, sexism, and nationalism.

THE JOURNEY TO A THESIS

The idea for the book was inspired by a connection made by the two authors in a seminar in 2014 at NYU. Carol was teaching on the topic of “Resisting Injustice,” and Naomi was enrolled. Students were reading Carol’s book, The Birth of Pleasure, which is based on a 10-year study of the development of girls. It tracks a journey toward “selflessness” by just trying to be “good” according to the code and script of patriarchy. This material was compared with the work of other scholars tracking boys’ journey toward “detachment” to fulfill the masculine ideal of self-reliance, emotional stoicism, and independence.

In the course of this class, the findings about female development took Naomi back to the Christmas her father died, five days before her fifth birthday. Remembering how she coped with the loss, she realized that she too had experienced detachment, avoiding intimate relationships thereafter in order to forgo a repeat of the trauma of loss. She began to wonder if there was a connection between the “psychology of loss and the politics of patriarchy.”

After later convening with Carol on the study of related psychoanalytic literature, they concluded that there is, in fact, a connection. They gave a talk on the topic of resisting injustice in 2016, by coincidence the night following Donald Trump’s election. They were subsequently encouraged to write a book based on their presentation. Their thesis is that the male and female adaptive response to loss serves to sustain patriarchy.

LOSS AT THE HEART 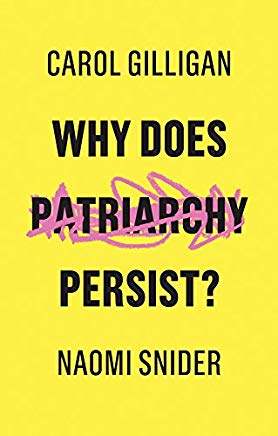 It’s probably virtually impossible for anyone to grow into maturity without experiencing some form of traumatic loss, and every reader may have memories that pertain. They might relate to losing a parent, sibling, other relative, or beloved friend through death or some form of tragic estrangement, as in parental divorce.  In all cases, adaptation may involve some form of emotional shutdown simply to endure.

Carol and Naomi referred to the tendency of boys to substitute relationships, as in camaraderie, for relationship in order to avoid the kind of intimacy that creates vulnerability to loss. Unfortunately, this can also lead to lack of empathy and compassion as well as reluctance to engage in a loving relationship. This outcome can serve the development of a masculine inclination to “do” as in achieve rather than “feel.” This classically emerges as the patriarchal drive for some combination of wealth, status, and power.

In the case of girls, the result of loss can also be to avoid one-on-one intimacy. In this case, though, they may form relationships by taking on supportive, nurturing, and care-taking roles and trying to please others. This enables the male to lead and dominate, while the female forgoes the opportunity to give voice to the true self, as in my eruption over Abraham in the backyard.

THE TRUTH OF THINGS

Reading this wonderful book was for me a bit like getting years of therapy that I didn’t realize I needed. Like Naomi, I had suddenly lost my father early in life, and I too could see the tracks of the effort to move on without missing a beat. It resulted in an emotional reserve that is evident in many years of my ensuing history. However, that loss also served to elevate my idea of feminine potential way above that limited by patriarchy.

I think of the patriarch as being basically overbearing and bossy, and my father was not that. He was engaged and entertaining and also vulnerable, perpetually troubled by a medical problem that developed during basic training in the Army. It resulted in his unexpected death at the age of 45.

As I said, there were four children in the family–three girls and one boy, all major achievers–and my older sister was in her first weeks at Stanford University. At age 42, with only a high school degree and no work history, my mother was suddenly pitched into the classic masculine role of provider–and she performed beautifully.

Within a few months, she got a job and embarked on what would become an extremely successful career in the central office of a school district. She also ensured that we all got the best education available. Of course we cooperated, working hard to make our grades and meet expectations that had long been established as very high.

Although I emerged from this loss with an elevated idea of feminine potential, my post-graduate career continued to bear the imprint of patriarchy. Wherever I worked, except during two years of teaching high school English, the masculine dominated. And I heard a command murmuring in the corridors of power: “Defer.”

I get exasperated with men sometimes, and I know it’s mutual. However, I love them. It is always a thrill to see their physical beauty and the ways that strength and courage manifest in leadership. I also feel for them. As I think back through history and consider the moment, I believe that the story of Abraham and Isaac is incorrect. I don’t believe an angel intervened to save Isaac. I think the masculine, as represented by Isaac, has been sacrificed on the altar of patriarchy.

This is because it has imposed enormous responsibility on the male in several ways. One, as I already mentioned, is the conditioning to “do,” as in achieve, rather than to “feel.” Another is the obligation to fulfill the very taxing role of family provider. A third is sometimes to perform in the role of “warrior.” (This is the term I have chosen, not Carol and Naomi.) This comes from the need to serve in a war that patriarchal leaders repeatedly cause by jousting for power on the world’s stages.

Of course, wars also cause the losses that create the adaptations that serve patriarchy. The men who survive them may return home damaged in body, mind, and soul by the things they have seen and the things they have been ordered to do. This includes the killing of not only other men but also possibly civilians including women and children. Talk about the need for detachment!

The dark side of patriarchy will endure, Carol and Naomi conclude, until it is retired through psychological transformation. “Its hierarchy,” they write, “is premised on a loss of relationship and thereby on a sacrifice of love.” This book warns that the ability to feel love, empathy, and compassion are at risk through patriarchy, and so, as a result, is the survival of humanity. To paraphrase their conclusion, we can change or we can continue on as we are. Which way will we go?

I have a thought. Let’s go back to the story of Abraham in the Bible.

I read the Bible version in Genesis 22:1-18. The angel who intervened to prevent the sacrifice of Isaac explained that God was making a “deal” with Abraham. By proving his obedience through his willingness to kill Isaac, Abraham would be rewarded by the fact that his male issue would eventually rule the entire world.

We now know how this has turned out, so I have envisioned a different version of the myth.

In my new version, God tests Abraham’s wife, Sarah, not him. According to the myth, she was 90 when Isaac was born, and now he is nearing the age of 10. He is her first and only child. As she goes about her tasks outside the family tent one morning, God interrupts.

“Behold, here I am,” he says. “Take now thy son, thine only son Isaac, whom thou lovest, and get thee into the land of Moriah and offer him there for a burnt offering upon one of the mountains which I will tell thee.”

Sarah’s white head tips forward a little as she pauses to think for a moment. Then she looks up at the blue sky and addresses the source of the deep voice beyond a cloud. “Behold, here I am,” she says. “Go to Hell.”

And a different story begins.

8 Responses to “The Sacrifice of Isaac”