As I trailed Cathy Smith and her art work through the Nambe Trading Post, at one point I exclaimed, “You’re a frigging genius!”

My interview with Cathy was due to another blog-inspiring synchronicity a few days earlier. Driving home with a friend after lunch in the little village of Chimayó, I asked if Susan wanted to stop at a gift shop. She immediately directed me to turn to my left onto the road leading to the trading post compound. What a find–on many different levels. 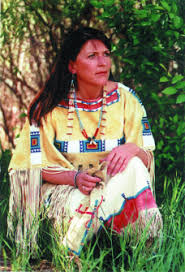 To put Cathy A. Smith into perspective, however, I will detour to language on the web page of the National Cowgirl Museum and Hall of Fame, into which she was inducted in 2013. Established in Fort Worth in 1975, its mission is to honor and celebrate women, “past and present, whose lives exemplify the courage, resilience and independence that helped shape the American West.”

To give you an idea of the company Cathy keeps among more than 750 women, honorees include Sacagawea, principal guide of the Lewis and Clark expedition; painter Georgia O’Keeffe; writer Laura Ingalls Wilder; legendary sharpshooter Annie Oakley; and actress Dale Evans. The last honoree is especially significant because Cathy has solid footing in the movie industry.

So what does she do? So many things, actually. However, first and foremost she is an artist, but one whose work is dedicated to the preservation of traditional Native American arts. One extremely important venue for her work has been the movie industry, in which she has served as a designer of authentic costumes for Westerns.

Cathy was born in Deadwood, South Dakota, where Calamity Jane’s legendary life was also seeded, and she grew up on a ranch near the Cheyenne River Sioux Reservation.  The Lakota, Dakota, and Nakota are all Sioux tribes, and the Lakota were her neighbors. She said that from the time she was a child, she was fascinated by “old, old stuff,” as she put it and had an “aching drive” to learn from Native elders.

A Lakota/Hidatsa Medicine Man chose her as one of his apprentices and became her mentor for many years. When she expressed a desire to learn porcupine quillwork, he reminded her that quillwork was a holy art and could only be done by those who had dreamed of Double Woman. Ultimately he guided her through the ceremonies necessary to get the permission of the Double Woman spirit and introduced her to the last living Double Woman Dreamer, who taught her quillwork. Cathy continues to practice the thanksgiving ceremonies connected with quillwork. 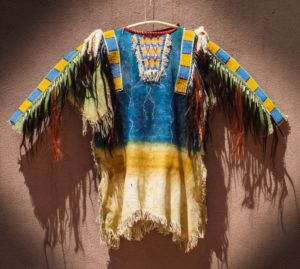 When Cathy was older, she would pack up a couple of weeks of food every now and then and go ask elder women to teach her. In a show of affection and respect, she was inducted as a family member through the Hunka ceremony.

All the while, Cathy was attending pow wows and dances, learning stories, history, and other crafts like beading and how to tan hides. The latter involved soaking the skins of antelope, deer, and Bighorn Sheep in tubs of water with brains. This process does not damage fibers as tanning with sulfuric acid does, and it creates soft, white hides on whose surfaces it is possible to sew colored beads and porcupine quills.

Cathy earned a degree in biochemistry at Colorado State University in Fort Collins with the intention of becoming a veterinarian, but she could not afford the additional year of study then required of women. She returned to the family ranch but balanced work there with continuous study of Native American art. Eventually, she began to generate income by restoring artifacts for collectors and museums and creating costumes for clients. 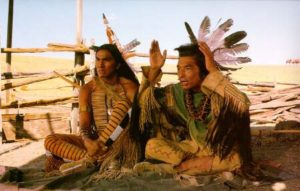 Lakota Warriors in “Dancing with Wolves”

Now we’ll cut to the end of the 80s when Cathy transitioned into Santa Fe with her teenage daughter, Jennifer Jesse Smith. Jennifer is now a jewelry designer and co-owner of the trading post.

Cathy continued to work in restoration with galleries, and a breakthrough moment came when a contact in one of them told her that a movie company was in town and looking for someone to create costumes. This was for “Dances with Wolves,” directed by and starring Kevin Costner. Cathy was hired, and working 15 to 20 hours a day with four assistants, she created 60 costumes for the movie over 10 weeks. After that, she was on location  for 5 1/2 months keeping peace among the Lakota extras and actors and fitting and repairing costumes.

“Dances with Wolves” won seven academy awards including for best picture in 1990, and Cathy’s career in the industry had begun. She would ultimately design authentic costumes for 39 Westerns. In 1991, she won an Emmy award for costume design for “Son of the Morning Star,” a television miniseries about George Custer and Crazy Horse. 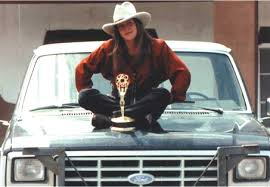 Cathy continues to restore original artifacts for museums and collectors, and she creates custom clothing for films, museums, and clients worldwide. However, ever since the opening of the Nambe Trading Post in 2014, she has also been working on her own art in oil paintings and “ledger” drawings. The latter style was developed by plains Indians beginning in the 1860s and was produced by using pencils and crayons and water colors to draw on old accounting ledgers. The study of that art informed the design of many costumes.

As you walk through the Nambe Trading Post, it’s more like visiting a museum than a gift shop, and examples of Cathy’s amazing artistic gifts are everywhere–in porcupine quill and bead work, elaborate movie costumes (of which she has a trailer full for rent or sale), paintings, drawings, and rawhide shields. In addition, there is her daughter Jennifer’s beautiful silver jewelry as well as pawn jewelry, Navajo rugs, and Western artifacts, all very attractively arranged.

There is something very unusual in the tone of the collection. It may have to do with that passion to learn and preserve Native American culture that Cathy had from the very beginning. I think that her love and devotion can be sensed as well as seen everywhere in that big room.

The mythic cowgirl spirit lives on in Cathy’s small, down-to-earth, energetic, and mature self. I kept getting tickled at her bluntness, the total lack of artifice, and the distance she maintains from getting full of herself in spite of enormous talent.

I will never forget the image she provided of her first visit to the annual Indian Market in Santa Fe. She couldn’t qualify for a booth because she has only 16% Indian blood as opposed to the required 25%. She just walked around in the crowd, shoulders loaded with hides that she had brain-tanned herself. Recognizing their special value, Indians in the booths quickly bought her out at $200 a hide.

In conclusion, the Cowgirl Hall of Fame honors women who “helped shape the American West” with the intent of fostering “an appreciation  of the ideals and spirit of self-reliance they inspire.” Pay a visit to Cathy Smith at the Nambe Trading Post, and you’ll definitely understand what they’re talking about. 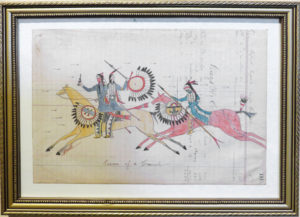 One Response to “The Spirit of Cowgirl Endures through Art”