“So you left me hanging,” my friend wrote.

“Was there ever a replacement for Apollo?”

My friend was responding to my most recent post about the metaphysical experience emerging from the passing of Apollo, a Samoyed puppy. I realized that a follow-up might be not only comforting but also inspiring in this challenging moment. First, however, I need to add some deep history about the origin of the breed. 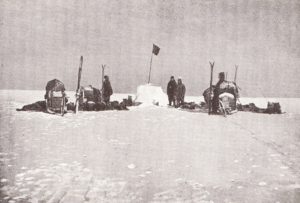 This dog originated in Siberia. It was trained by Samoyede tribesmen to pull sledges, herd reindeer, and hunt with them. The dogs were treated like family, and they are known today for their pleasant disposition and rapport with children. However, they were also tough. In 1911, a Samoyed was the lead dog in the first expedition to reach the South Pole under Norwegian explorer Roald Amundsen.

Of course, I didn’t know all this when I first sighted a Samoyed pair walking along the bank of the River Ouse in England decades ago. I was just enchanted by their radiant beauty.

Now back to Nashville, where my last post began. My former husband and I had committed to acquire a puppy to enrich the visits of my stepchildren, and of course I lobbied for the Sammy, to be the fourth in my history.

The breed is rather rare, but I soon found a puppy available up in Canada. It was a female, the last of her litter. The daughter of champions, she had a hefty name, Bluestorm Orion Cassiopoeia. The breeder said she had a lovely temperament, and after more discussion, I  basically said, “Put her on a plane.”

Cassie’s flight landed early in the Nashville airport, and when the children and I arrived, she was sitting quietly in her little crate in the middle of a huge, deserted hangar. What a way to begin a new life. She readily emerged into a circle of cooing and patting children. After she “anointed” a patch of lawn, we headed home.

At three months old, Cassie was bigger than I expected, having already passed through the cuddly little bear phase, but the children would never know what they had missed. It was unusual for a puppy of such quality to remain so long with a breeder, but I can now imagine an explanation: “She was waiting for you.” 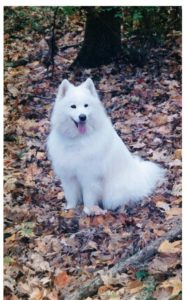 After quietly and eagerly exploring the three levels of our home, Cassie readily loaded up again, and we headed off to the Deerwood Nature Preserve, where she was initiated into a lifetime of daily walks in beautiful settings. I’m sure Apollo would have enjoyed this too, but I remember that night when he kept mounting the two other pups. He would have been a handful, and before he was named “Apollo,” he bore the nickname “Macho Pup.” Another lesson in learning to trust.

I was unwise in standing pretty much aside to let Cassie and the children get acquainted that summer. They really bonded, and when I later inserted myself into her management and discipline, Cassie would sometimes just look up at me as though to ask, “And who did you say you are?” It was a couple of years before I became her main person.

Even though I was Cassie’s primary caretaker, she immediately became my teacher. Every day began with a long walk in the nature preserve. At first she pulled me as though I were a sledge, but she adapted to a long leash after a while. Paying attention to her body language, to what she saw, where she wanted to go, was introducing me to a whole new world whose door may open only with the shove of a good dog nose.

My introduction to the wonders beyond that door occurred one morning after we had finished our walk and were heading back to my Jeep in the parking lot. Suddenly Cassie leapt for the tall grass along a wire fence. I had already learned that such eagerness could mean trouble, and I grabbed her by the collar and pulled her away from whatever had aroused her interest. 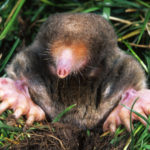 What a sight! Pale underbelly exposed, a mole lay on its back, possibly in shock, a long earthworm coiling out of its mouth. Had Cassie injured the mole? Did I need to help it? Was the mole eating the worm and should I save the worm? Sometimes I feel overly responsible.

I loaded Cassie up in the Jeep and opened a window for her. The blood of the hunter was up, and she panted excitedly, eyes riveted on the place where we had left her prey. I returned to the site, and when I reached down to right the mole, it flipped over of its own accord and disappeared into the deep grass. The worm was nowhere to be seen.

My keeping of a painting journal had lapsed by then, but if I were an accomplished artist, I could paint today the image of the stunned mole and the ambiguous worm. I’m sure that anyone who saw it would pause and wonder. As soon as we got home, I proceeded to do some research. 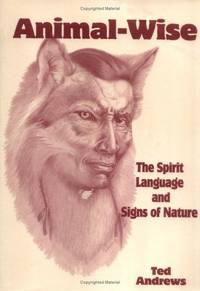 In a book called Animal-Wise by naturalist and mystic Ted Andrews, I learned that moles can lead shamans into the Underworld to find treasures of insight and guidance. The mole digs and tunnels and feeds on the earthworm, which also digs and tunnels. As a result, the dramatic dual appearance could be taken as guidance to study, explore, and analyze the teachings of the earth itself.

The life I had committed to allowed Cassie and me to walk thousands of miles together, eventually in preserves in Virginia and Alabama as well as Nashville before settling in the more rugged landscape of New Mexico.  I enjoyed the priceless gift of being able to “pay attention.” And I am in accord with a friend who commented at the end of my last post that it is necessary to do so with all our senses “until we can see the light.”

Although I soon had a library of resources through which I could search for the potential meaning of the visual wonders that so often appeared, Cassie remained my primary teacher. As I said, she typically led the way, and where she paused, I paused. I might take a look at what intrigued her, but something else might also catch my eye. A great teacher sometimes simply opens the door to a roomful of wonders that an apt student will excitedly explore independently.

And to close, I later learned that the Roman naturalist Pliny, who died in AD 79, reported that magicians preferred to use the intestines of moles to divine fate. In shamanism, again, they can also be guides into the Underworld. Why was the mole in the deep grass that day when they live mostly underground? Was it a messenger who knew that shamanism would soon enter my life?

2 Responses to “The Story Beyond Apollo”